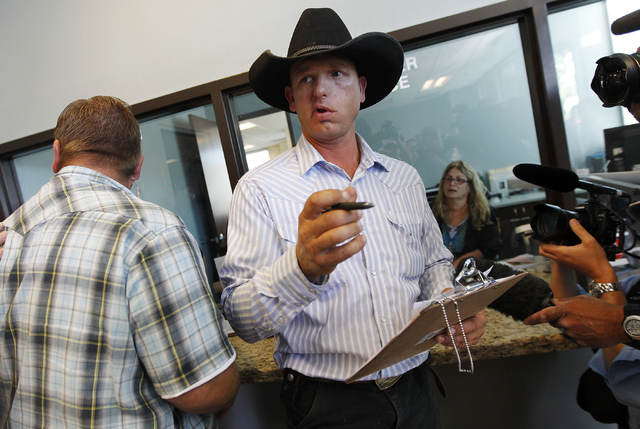 FILE - This Jan. 27, 2016, file photo provided by the Multnomah County Sheriff's Office, shows Ryan Bundy. Bundy and his brother, Ammon Bundy, are being transferred from a Portland, Ore., jail to Nevada Wednesday, Nov. 2, 2016, where they will be tried early next year on charges stemming from a 2014 standoff with federal agents near their father's ranch.(Multnomah County Sheriff via AP, File)

Ryan Bundy, a son of embattled rancher Cliven Bundy who is incarcerated pending trial on conspiracy charges, has sued the federal government.

In a lawsuit filed Monday in the U.S. District Court for Nevada in Las Vegas, Bundy challenges the constitutionality of prison policies and alleges deprivation of rights after he was punished for refusing to obey those policies.

Bundy was transferred to prison in Nevada last fall after he was acquitted of conspiring to stage an armed takeover of a national wildlife refuge in Oregon. He is scheduled to stand trial later this year on separate federal conspiracy charges that result from an armed standoff near his father’s ranch in Bunkerville in April 2014.

“Plaintiff Bundy has been forced and threatened to undergo oppressive, intrusive, and unlawful body cavity searches multiple times per day where his clothing is removed, where his genitals are or would be exposed to Defendant Doe’s during these multifarious and nonconsensual intrusions against his fourth, fifth, eight and fourteenth amendment rights,” Bundy, who is representing himself, wrote in the lawsuit.

“Plaintiff Bundy has been forced and threatened to bend over and expose his anus by spreading his butt cheeks wide open while Defendant Doe’s peer up into Mr. Bundy’s rear body cavity hundreds of times,” he wrote.

The constitutionality of prison strip searches has been litigated extensively. In such cases, the courts generally are concerned with how to balance the prison’s interest in maintaining security with a detainee’s Fourth Amendment rights against unreasonable searches and seizures.

“On or around March 20, 2017, Plaintiff Bundy refused to undergo any further strip/body cavity searches imposed upon his person,” Bundy wrote in his filing. He said prison employees “continue to ‘punish’” his decision to refuse to be strip searched by “keeping him locked down in disciplinary segregation for twenty-four hours per day, with no opportunity for meaningful daily exercise.”

Bundy acknowledges in his filing that prison officials offered to transport him to a hearing on the constitutionality of strip searches.

But, in a convoluted sentence, he seems to claim that is unconstitutional, because he would have to be strip searched to attend the administrative grievance hearing.

He says that while in disciplinary segregation, he has been deprived a working toilet, toilet paper, a pencil and paper and thus has “no way to prepare for his own defense against the Government.”

Bundy lists United States Inc. as one of the defendants in his lawsuit, choosing to refer to the federal government as a corporation. He is seeking roughly $35 million in damages from a multitude of defendants, who include the Corrections Corporation of America, Nevada Southern Detention Center Warden Charlotte Collins and a number of federal employees whose names were not listed in the filing.