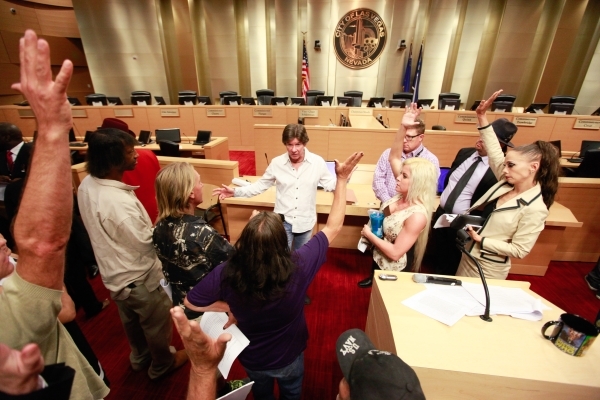 Las Vegas City Attorney Brad Jerbic speaks to a group of people about the Fremont Street performer ordinance at Las Vegas City Hall on Tuesday, Aug. 11, 2015. The proposed draft would require street performers to register with the city and rotate between a limited amount of performance zones from 3 p.m. to 2 a.m. CHASE STEVENS/LAS VEGAS REVIEW-JOURNAL Follow him 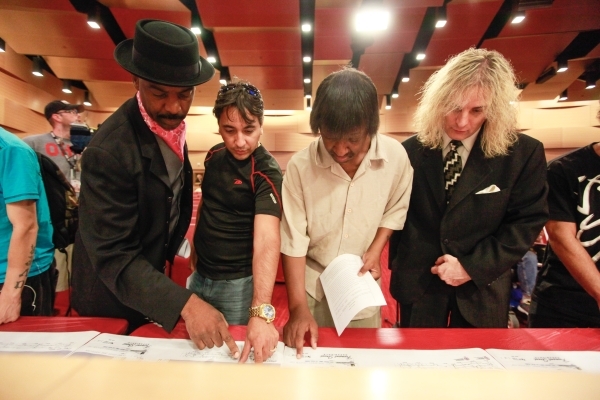 Scarlet Ray Watt, from left, "Olly," Stanley Washington, and Zenon Skyy look over a map showing proposed street performer zones during a public meeting about the Fremont Street performer ordinance at Las Vegas City Hall on Tuesday, Aug. 11, 2015. The proposed draft would require street performers to register with the city and rotate between a limited amount of performance zones from 3 p.m. to 2 a.m. CHASE STEVENS/LAS VEGAS REVIEW-JOURNAL Follow him 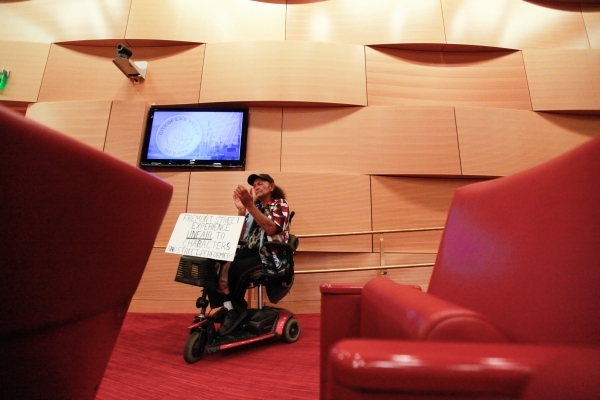 Gary Downe claps during a public meeting about the proposed update to the Fremont Street performer ordinance at Las Vegas City Hall on Tuesday, Aug. 11, 2015. The proposed draft would require street performers to register with the city and rotate between a limited amount of performance zones from 3 p.m. to 2 a.m. CHASE STEVENS/LAS VEGAS REVIEW-JOURNAL Follow him

An Elvis, a Blues Brother and the “Pirates of Fremont Street” joined about 20 other street performers Tuesday at Las Vegas City Hall to air their concerns about a bill that would limit where they can strut their stuff.

The informal meeting was hosted by City Attorney Brad Jerbic and Councilman Ricki Barlow, with other council members and Mayor Carolyn Goodman dropping in to listen for parts.

“There will be no solution from today’s meeting,” Jerbic said. “It’s a dialogue.”

A bill introduced last week by Barlow and Councilman Bob Coffin would impose new limits during busy hours at the Fremont Street Experience, 3 p.m. to 2 a.m.

Performers could only be in one of 38 six-foot circles, and they would have to move every two hours. They’d also have to keep 40 feet away from other performers and 100 feet away from stages during concerts.

The city says the rules are intended to keep people from monopolizing prime spots and prevent fights between performers.

But several performers — most of whom came in civilian garb — said the limit on the number allowed at one time could have devastating effects.

“How do you know if you’re going to work that night?” asked Billy Williams, a singer, magician and balloon artist who has been on Fremont for six years.

Heather Baressi, who makes balloon art for children, imagined spending half her night standing in a “staging area” waiting for an open spot, meanwhile being forced to tell children they can’t have balloons.

When Jerbic asked for a show of hands, not a single performer supported a time limit.

As the five-block Fremont Street Experience has gotten more filled with performers and costumed characters in recent years, complaints about lewd outfits, aggressive solicitation of tips and even fighting have risen. Jerbic said he hears frequently from people who feel unsafe and won’t ever come back or won’t bring their children downtown.

But several performers who spoke Tuesday described themselves as artists who do it for love of the craft. They feel unfairly singled out.

Michael Moore, a musician who heads a performers’ union, said there are fewer problems than the city alleges. He said most of the fights he sees involve tourists, not performers.

The grubby costumed characters that give the Experience a bad reputation often get their jobs off Craigslist and have no real talent, balloon artist Jared Carle said.

By a show of hands, most performers said they had no problem with another provision in the bill that requires performers to register. Jerbic said the city will not do background checks on performers and will not charge them to register. Officials simply want to know who’s on Fremont in case of problems, he said.

Moore said the fight is really about money and control. The casinos that line Fremont Street “want to own the sidewalks, and they can’t in this country,” he said.

Street performers are protected under the First Amendment of the U.S. Constitution so long as they are not charging and merely accept tips. But courts have said the government may limit the “time, place and manner” of speech so long as it does so narrowly and for a legitimate reason.

The American Civil Liberties Union of Nevada, which successfully fought an earlier city effort to regulate performers, has signed on to support the new bill. The ACLU praised the bill because it tells performers where they can be, rather than where they can’t.

The City Council is scheduled to consider the bill Sept. 2.

Jerbic offered to host more meetings with performers in the meantime in hopes of reaching a compromise and said the city is trying to balance competing rights.