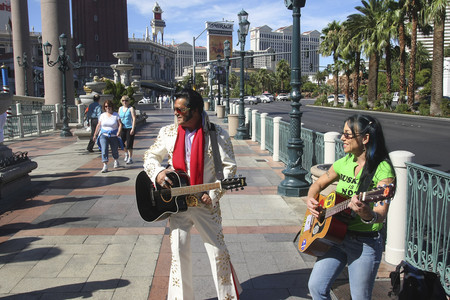 Longtime Las Vegas resident Suze Banasik loves performing for tourists as they walk along the Strip.

But nowadays, before heading out with her guitar, she stops to ask herself, "Do I feel like going to jail today?"

That’s because Banasik, 45, was arrested in March for obstructing a sidewalk and operating a business without a license. She spent 12 hours behind bars before Clark County prosecutors decided not to pursue the case.

On Thursday, the American Civil Liberties Union of Nevada filed a federal lawsuit on behalf of Banasik and another street performer, Elvis impersonator Bill Jablonski.

"I can’t stand bullying, and that’s pretty much why I came to the ACLU because it’s not fair," Banasik said.

Over the years, the ACLU has fought and won similar First Amendment battles for handbill distributors, political activists and street preachers on the Strip and at the Fremont Street Experience.

"They think each new type of expression they can suppress, and we have to go to court for each of those, and the results are always the same," ACLU attorney Allen Lichtenstein said.

ACLU attorney Maggie McLetchie said her group accepted the case "because street performers have free speech rights and the right to free expression, including on the Strip."

"Cases that were litigated have made clear that the sidewalks on the Las Vegas Strip are a public forum," she said. "Despite this fact, we received a number of complaints from street performers that Metro was telling them they couldn’t perform."

No one at the Police Department responded to a request for comment Thursday, and Roger declined to comment. Edie Cartwright, a spokeswoman for the attorney general’s office, sent the Review-Journal an e-mail in which she referred to the matter as "a local issue."

"The ACLU has not been in discussions with our office about this issue," she added.

McLetchie said her organization comes armed with a decision from the 9th U.S. Circuit Court of Appeals, which recently ruled in favor of a Seattle balloon artist.

"The court said unequivocally that street performers are protected by the First Amendment because what they’re doing is a form of protected expression," the lawyer said.

Banasik and Jablonski both said they entertain tourists simply for the joy of it. They consider any tips they receive a bonus.

But ACLU attorneys said case law protects the performers’ activities even if they solicit money.

"Lots of cases make clear that the only thing you could really limit is aggressive panhandling," McLetchie said.

Jablonski, 50, said he first moved to Las Vegas about two years ago.

Although he has performed Elvis Presley songs on stages in several states, he said he carries his guitar only as a prop when he ventures out to the Strip in costume. Sporting long, dark sideburns and a jumpsuit, he poses for pictures with tourists.

"They come from all over the world looking for an Elvis," Jablonski said.

His eyes teared up as he recalled lifting a disabled girl out of her wheelchair so her father could photograph the pair.

"In the end, when you see their faces smiling, that all makes it worth it," he said.

Banasik said she began her street performances about a year ago. She plays and sings 90 to 100 cover songs, as well as some original material.

She said she had her first run-in with police in front of the Wynn in July 2008. She complied with an officer’s request to leave the area and was not cited.

"I was crying because he had me convinced I was going to jail," she recalled.

She was performing in front of the Mirage in December 2008 when police cited her for begging and being a public nuisance. No formal charges ensued.

Banasik’s arrest came on March 12, when she was performing on a pedestrian bridge over Flamingo Road.

Jablonski said he was cited in mid-2007 for obstructing a sidewalk while he impersonated Elvis on a pedestrian bridge over Tropicana Avenue. Again, no formal charges were filed, but he said the incident deterred him from visiting the Strip in his costume for a while.

After reading about the ACLU’s victory earlier this year in another First Amendment case, Jablonski decided to return to the Strip. He said he received no additional tickets, but the harassment continued.

Lichtenstein said such harassment has a "chilling effect" that keeps other performers away out of a fear that they will be cited or arrested.

"For well over a decade, there’s been this attempt to make the sidewalks up and down Las Vegas Boulevard on the Strip the private domain of the hotel-casinos and their interests," Lichtenstein said. "And the fact that the police continue to think that it’s more important to serve those interests rather than to protect the rights of free speech on those sidewalks as ordered by federal courts is disheartening."