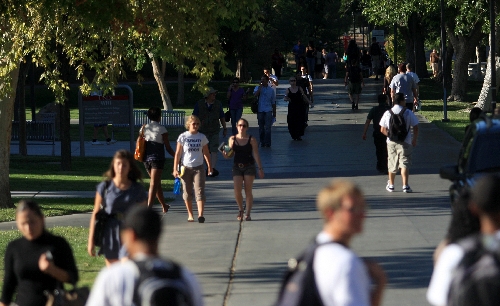 In a memo to the system’s governing Board of Regents released Tuesday, Klaich outlines the system’s plan for next year’s legislative session. Large cuts are expected, as the state’s revenue is predicted to be short by $3 billion or more.

The plan is scheduled to be presented to the board at its meeting this week in Reno.

Klaich said the plan was drafted by him and the presidents of the state’s colleges and universities. It calls for more college graduates, predicts higher tuition and fees for students, pitches creation of a rainy day fund, and suggests radical changes to the formula used to fund the higher education system.

“More support is going to have to come from students, from their families, from outside sources,” Klaich said. “We’re clearly moving in the direction of a more privatized model.”

The memo begins by saying an investment in higher education is the key to diversifying the state’s economy.

It acknowledges, however, that in the short-term the higher education system will have to “perform within the limited resources available.”

Klaich calls for the system to graduate more students and to increase research.

He said “substantial changes” will need to be made in how the state funds higher education.

First, student tuition and fees will likely have to rise if there is a cut in state support for the system. Klaich wants to examine whether all tuition and fees should stay with the institutions.

UNLV President Neal Smatresk said that provision is the most important in the plan.

Inevitably, some institutions argue that they do not get the same portion back that they put into the pot. UNLV, because it has a higher number of out-of-state students who pay more than in-state students, has said it gets the short end of the deal when it comes to the distribution of tuition and fee revenue.

The plan also calls for creation of a rainy day fund to guard against possible future budget shortfalls. It would use state appropriations and money unspent in previous years. Currently, unspent money is sent back to the state general fund, leaving little incentive for institutions to save money at the end of the fiscal year.

Overall, Klaich said, the plan would be more transparent about how higher education is funded. There would be no funneling money back and forth. Institutions would get a certain amount up front and would keep what they charge students.

The plan also calls for going after more external funding through research and grants. Klaich cites Utah as an example to follow. That state has created a science, technology and research initiative designed to boost high tech jobs.

The chancellor also wants more clearly articulated goals set by state leaders, which the higher education system could pursue. It would be a mission statement, of sorts, for the state’s future.

Klaich suggests that such a series of goals could include renewable energy, biotechnology and health care. He said it is up to the next governor and legislative leaders to set the agenda.

“That is the essence of being a governor,” the chancellor said. “That’s what a state elects a governor for.”

The higher education system has battled over the last several years with Gov. Jim Gibbons, who lost in the Republican primary over the summer.

To help increase the number of graduates, the plan also pitches accelerated degree programs, a limit on the number of credits needed to earn a degree, and perhaps discontinuing programs with low numbers of graduates.