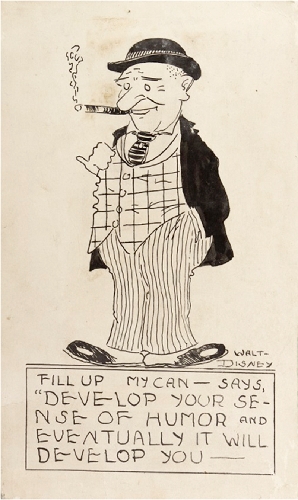 RENO — An original, autographed drawing by Walt Disney, thought to have been made about 1920 before he hit it big in the entertainment world, will go up for auction in Reno this week.

The whimsical drawing of a cigar-chomping man wearing a derby hat will be among 1,400 items up for sale at the two-day auction set to begin Tuesday at the Atlantis Casino Resort.

“Real pieces signed by him (Disney) are really rare,” said Fred Holabird of Reno-based Holabird-Kagin Americana, which is staging the auction. “This is one of the earliest known signed Disney pieces, if not the earliest.”

The drawing was once owned by Disney’s sister, Ruth Disney.

Also up for auction is what’s billed as the “first and possibly only known copy” in private hands of the original Nevada Black Book, which features names, information and photos of about a dozen people barred from entering Nevada casinos.