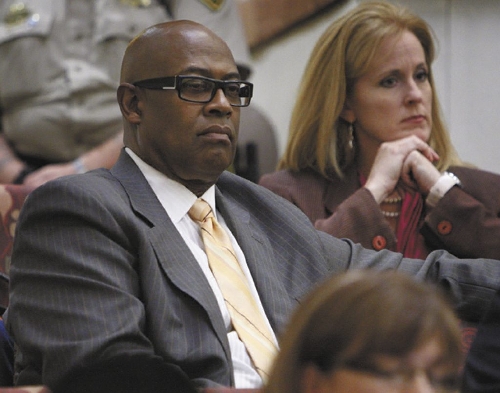 Commissioners voted 5-2 to rebuff the proposed contract for Arberry, who would have been paid $124,000 over two years plus extra pay for special legislative sessions. The denial followed tense verbal sparring between a couple of commissioners and two judges about the county’s authority to block the courts from hiring a lobbyist.

And the battle may not be over. The courts could take the rare step of issuing a written order that forces the county to pay for the lobbyist with money from its general operating fund.

After the hearing, Arberry, 57, rushed out of the county Government Center, refusing interviews with reporters.

It mattered little that Arberry on Friday paid the $3,100 he owed in property taxes to quiet those who questioned his fiscal responsibility.

Commissioners who voted “no” cited concerns about spending public money on state lobbyists and hiring an ex-lawmaker who had no cooling off period. Arberry was pursuing the lobbying job before he quit his Assembly post last week.

Commissioner Rory Reid said he has respect for Arberry, who spent a quarter-century as a lawmaker, but argued that it’s wrong for him to become a lobbyist without waiting at least two years.

“This is setting a bad precedent,” Reid said.

Chief District Judge Arthur Ritchie said the courts are required to ask the commission’s approval to spend $50,000 or more for a contract, even though they planned to use money from court fees.

Commissioners should not deny the courts’ right to hire a lobbyist because they disagree with the choice, Ritchie said, arguing that it would violate the separation of powers between the two branches of government.

“It’s an interference in the courts’ sovereignty,” Ritchie said.

The courts can either pay for the lobbyist from an administrative fund fed by court fees and fines, or they could order the county to pay the contract from its general operating fund, Ritchie said. He couldn’t recall the courts ever resorting to the latter.

Reid advised against the courts strong-arming the commission, saying, “It would be regrettable and show lack of judgment on your part.”

Commissioner Chris Giunchigliani cited a 1986 Nevada Supreme Court ruling that stated local governments have the right to keep judicial spending in check. Giunchigliani also read the guidelines for the courts’ administrative fund, which is supposed to be used to improve efficiency.

It says nothing about lobbyists, she said.

Ann Zimmerman, Las Vegas chief justice of the peace, said the courts began using the fee-based fund two years ago to cover lobbying costs so they wouldn’t have to dip into the county’s general fund.

She said it probably was awkward for commissioners to support hiring a lobbyist who would work against them on one or two legislative matters. For instance, the courts oppose a county-sponsored bill that would require 150,000 new residents before a justice is added, rather than 100,000.

“We don’t want to lose sight that on 95 percent of issues the courts and the county are on the same page,” Zimmerman said.

After the vote, Zimmerman said she was “disappointed, but not surprised” given the opposition that some commissioners expressed in the newspaper.

The courts should decide who will be the lobbyist, she said, adding that they could use a seasoned legislator to protect their interests as the state grapples with a budget crisis.

District Judge Susan Johnson sent out an e-mail just before the commission meeting, asking Ritchie to withdraw the lobbying request so that all of the district judges could have a chance to weigh in. The judges are set to discuss the contract behind closed doors at their regular monthly meeting today.

“This issue should not be brought to the commission before the judges have an opportunity to discuss (it) and voice their concerns,” Johnson wrote.

Johnson questioned whether the court system should be spending tax dollars during the economic downturn on an outside lobbyist when it has plenty of people within its ranks to represent its interests in Carson City.

The money spent on Arberry could be better used to bolster other more vital areas of the court system in need of funding, she wrote.

Johnson also said she believes Arberry is not the best candidate for the job, arguing that he has shown a lack of integrity in both his professional and personal life in recent years.

“My concerns are particularly heightened in view of the courts apparently negotiating with Mr. Arberry for his lobbying services while he was an assemblyman and chair of the Ways and Means Committee,” she wrote. “And at a time when this court was hearing a lawsuit, Mr. Arberry brought to halt foreclosure of his property due to his failure to pay the monthly mortgage payments.”

She was referring to the lawsuit that Arberry filed against Countrywide Home Loans on April 27, 2009, to stop the mortgage company, now part of Bank of America, from foreclosing on one of his rental properties.

Johnson disqualified herself from hearing his case Friday after learning about the courts’ pending deal with Arberry. In her order, she wrote that the move was necessary “to uphold the integrity and independence of the judiciary and to avoid the appearance of impropriety.”

Commissioners Tom Collins and Lawrence Weekly were the only two to vote in favor of Arberry’s contract.

Collins said he agreed with the separation of powers argument. The county was free to draft a bill that would limit the number of justices hired, and the courts should be able to pick who they want representing them in the Legislature, he said.

“The court should have the same autonomy,” Collins said.

He suggested that the courts bypass the commission by cutting a $49,000 contract with Arberry, with options to renew every eight months.

Commissioner Susan Brager said the courts are better served spending the money on services and upgrades instead of a lobbyist. Still, she wondered whether the law could be changed to allow the courts to handle their own budget without the county stepping in.

“I think they have a right to be independent of us,” she said.