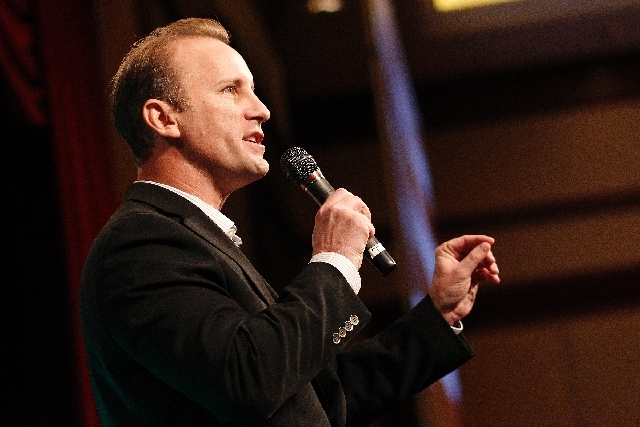 David McKeon, the new chairman for the Clark County Republican Central Committee, speaks during a meeting at the South Point in Las Vegas on Wednesday. 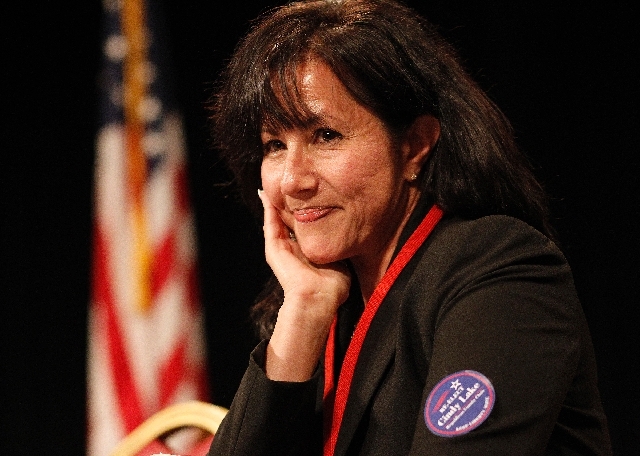 Cindy Lake, outgoing chairwoman for the Clark County Republican Central Committee, sits on the stage during a meeting at the South Point in Las Vegas on Wednesday. 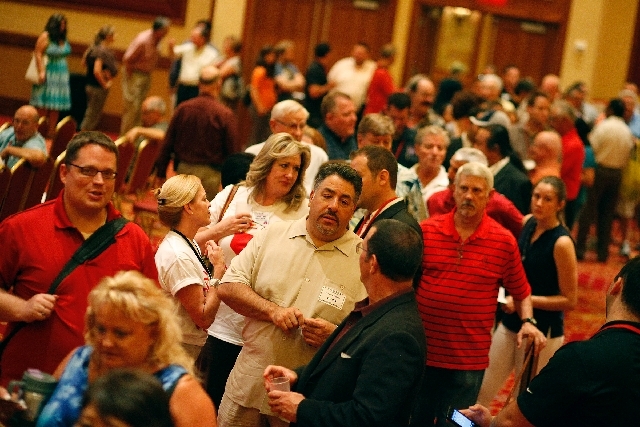 People line up to vote for candidates for the Clark County Republican Central Committee at the South Point in Las Vegas on Wednesday. 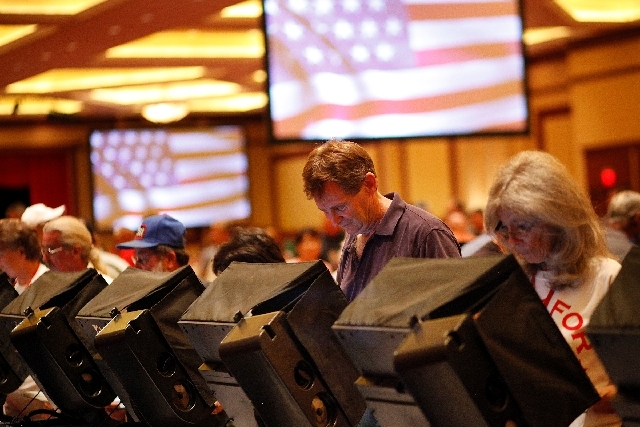 Ronald Solomon, in purple shirt, and others vote for candidates for the Clark County Republican Central Committee at the South Point in Las Vegas on Wednesday. 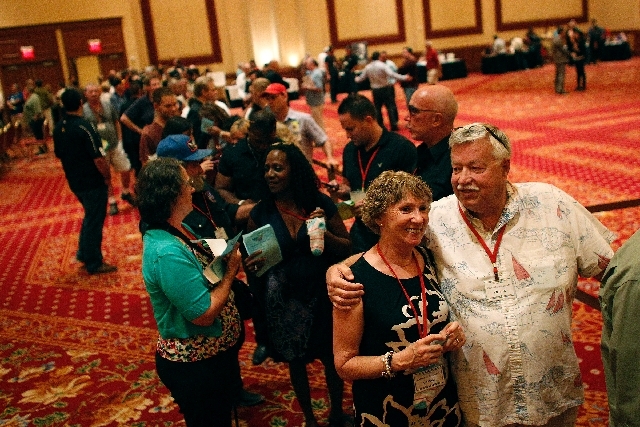 Charles Williams, right, and Kathleen Williams stand in line to vote for candidates for the Clark County Republican Central Committee at the South Point in Las Vegas on Wednesday.

The contentious election drew a lot of attention from more than 600 voting members of the county GOP, who decided the race that will determine the direction of state Republicans’ largest local party ahead of the 2014 elections.

McKeon said he was pleased by the turnout, which showed GOP yearning for fresh leadership.

“I’m happy for the party,” McKeon said. “I’m happy that we had a great turnout. I’m going to start building this party up to start winning elections. … This is how the party should be working.”

He said he already had met with leaders in the Hispanic and Asian communities. He also said that he plans to work with Lake despite their differences.

Lake said she’s worried about the direction of the party, but wanted to stay involved.

“I plan on working with all of you, if you’ll have me,” Lake told the gathering.

The vote was taken by secret ballot, using 20 electronic machines from the county Elections Department. The chairman’s term lasts for two years.

In addressing the crowd, both candidates delivered similar messages, saying they wanted to elect Republicans and move the party forward.

Lake said that during her one year in office she had taken the party from being $83,000 in debt to $40,000 in the black. The party also registered 1,300 conservatives in targeted districts, she said.

She said her election last year proved there’s no GOP “war on women.”

Feelings were high in the room and someone yelled “liar!” when Lake said McKeon supports candidates who are for higher taxes, illegal immigration, job-killing policies and President Barack Obama’s health care reforms.

McKeon took a different tact, using a prop to demonstrate his GOP plans had substance.

“I’ve been called a lot of names and one of them is ‘empty suit,’” he said, then dramatically dropped an empty suit to the convention hall floor. “Folks, that is an empty suit.”

He said the chairman’s job is to win elections.

“I’m a businessman and I know how to get the job done,” he said. “As a leader I know how to organize. I know how to raise money and that is what’s needed to restore respect and effectiveness to the Clark County Republican Party.”

During the course of the campaign, it turned ugly. McKeon’s opponents circulated documents about his messy divorce and custody battle for his two sons. His ex-wife accused him of physical abuse of herself and her children, which he denies.

In a sign of how bitter the election had become, former county Republican Party Chairman Dave Gibbs, who backed McKeon, left a “Dear Friends” letter denouncing the process on every one of the 870 chairs set up for the meeting.

“It’s pathetic what this race has become,” the letter said. “It is no longer about the direction of the CCRP; it’s about who is or who isn’t the sleaziest or meanest candidate. We long ago lost sight of what is important in this race.”

He said the race should be about expanding the party: “We need to add, not subtract.”

In 2012, the county GOP was shunned by state and national Republican leaders after Paul supporters took control of the local party and the Texas congressman ran for president. At the Republican National Convention, Paul backers defied the rules and voted for their man instead of Mitt Romney, who was picked to run against President Barack Obama.

“I support Dave because he has a plan and Cindy hasn’t done a good job this past year,” said Art Gisi, vice president of the Grass Roots Tea Party of Nevada. “He has contacts and he knows how to raise money, which is what this party needs. She hasn’t demonstrated any success yet. She hasn’t done anything to bring people together.”

Randy Rose said he voted for Lake because she’s “very conservative” and she backs a proposed “fair tax” which would eliminate the 16th Amendment of the U.S. Constitution that created an income tax and replace it with a consumption tax instead.

Rose said he couldn’t support McKeon because he didn’t know him and the challenger only recently moved to Nevada from California. He said he had never seen McKeon at a central committee meeting until he decided to run.

“It’s like somebody just moved into town and wants to be mayor,” Rose said.

Rose said California transplants are “infiltrating the Republican Party” and McKeon might be one of them.

“The problem with our party is it has been leaning too far to the left because of the progressives,” he said.

The Republican Party has a big disadvantage in Nevada compared to the Democratic Party.

As of the end of June, 268,053 Republicans were registered as active voters in the county compared to 404,737 Democrats, or 30 percent compared to 46 percent of the electorate.

A year ago, right before the primary election, 231,784 Republicans were registered to vote in the county, or 34 percent of the electorate, compared with 307,673 Democrats, or 44 percent.

The GOP infighting serves as just another distraction to the Republicans, who are trying to make up for lost ground over the past decade as U.S. Sen. Harry Reid, D-Nev., rebuilt the Democratic Party machine.

David Damore, a political science professor at the University of Nevada, Las Vegas, said the election matters because if the state’s largest local party can’t get its act together, the party and Republican candidates will continue to suffer with no go-to organization to help their campaigns.

“Until you get some serious folks elected and getting involved and raising money, it’s still a little bit of a circus,” Damore said of the infighting. “It’s all about internal battles and that’s not good.”