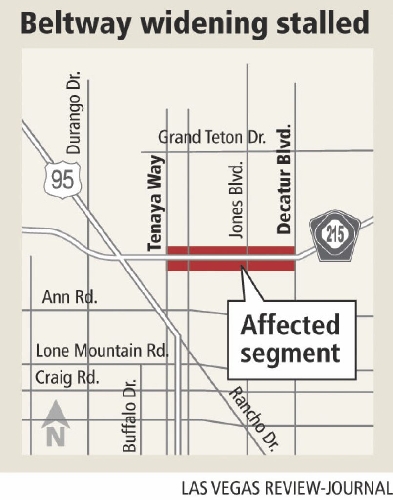 A tentative truce has been reached between rival contractors and Clark County that would launch a road-widening project on the Las Vegas Beltway, creating 200 construction jobs.

Las Vegas Paving and Fisher Sand and Gravel agreed to settle their two-year dispute over a $117 million project to widen the northern Beltway between Decatur Boulevard and Tenaya Way.

Las Vegas Paving would get the contract, and Fisher would get a $5 million settlement. That would resolve a feud that wound up in an appellate court last year. County commissioners are scheduled to review the agreement on July 19. If they approve it, work would start by October and finish in about 18 months.

"No one was winning by keeping this thing tied up," said Jim Barker, a Las Vegas Paving attorney. "It was a good business decision all the way around."

The company would cover "the lion’s share" of Fisher’s $5 million settlement, and the county would chip in the rest, using interest that accrued on $140 million set aside for the project, Barker said.

Because of the settlement, he said, he couldn’t disclose what each party would pay Fisher.

"I’m glad we can get the conflict resolved and get people working," he said.

Widening that section of the Beltway will make it easier for drivers to get around in the northern valley and improve access to nearby shopping plazas, Sisolak said.

Parry accused commissioners of pro-union bias because Las Vegas Paving is a union shop and Fisher is not.

Commissioners, all Democrats, denied favoring union labor. They contended that Fisher was an irresponsible bidder that racked up violations for pollution, job safety and tax fraud.

And so began a legal battle that grew more combative and convoluted, dragging commissioners into the middle, until it wound up in 9th U.S. Circuit Court of Appeals last year.

The settlement will prevent one legal question from being addressed: whether a federal judge overreached his authority. In 2009, U.S. District Court Judge Robert Jones suggested that the commission appeared biased toward unions and acted corruptly in choosing Las Vegas Paving.

Jones told commissioners to reconsider the bids. Instead, commissioners voted to scrap the contested Beltway project and to start bidding anew on a similar project.

That angered Jones, and he ordered the county to award Fisher the contract.

Commissioner Tom Collins said he was OK with not tussling further with Jones.

The important thing is to upgrade the last stretch of the Beltway that needs to be widened, he said.

"I’m happy there has been a settlement reached," Collins said.