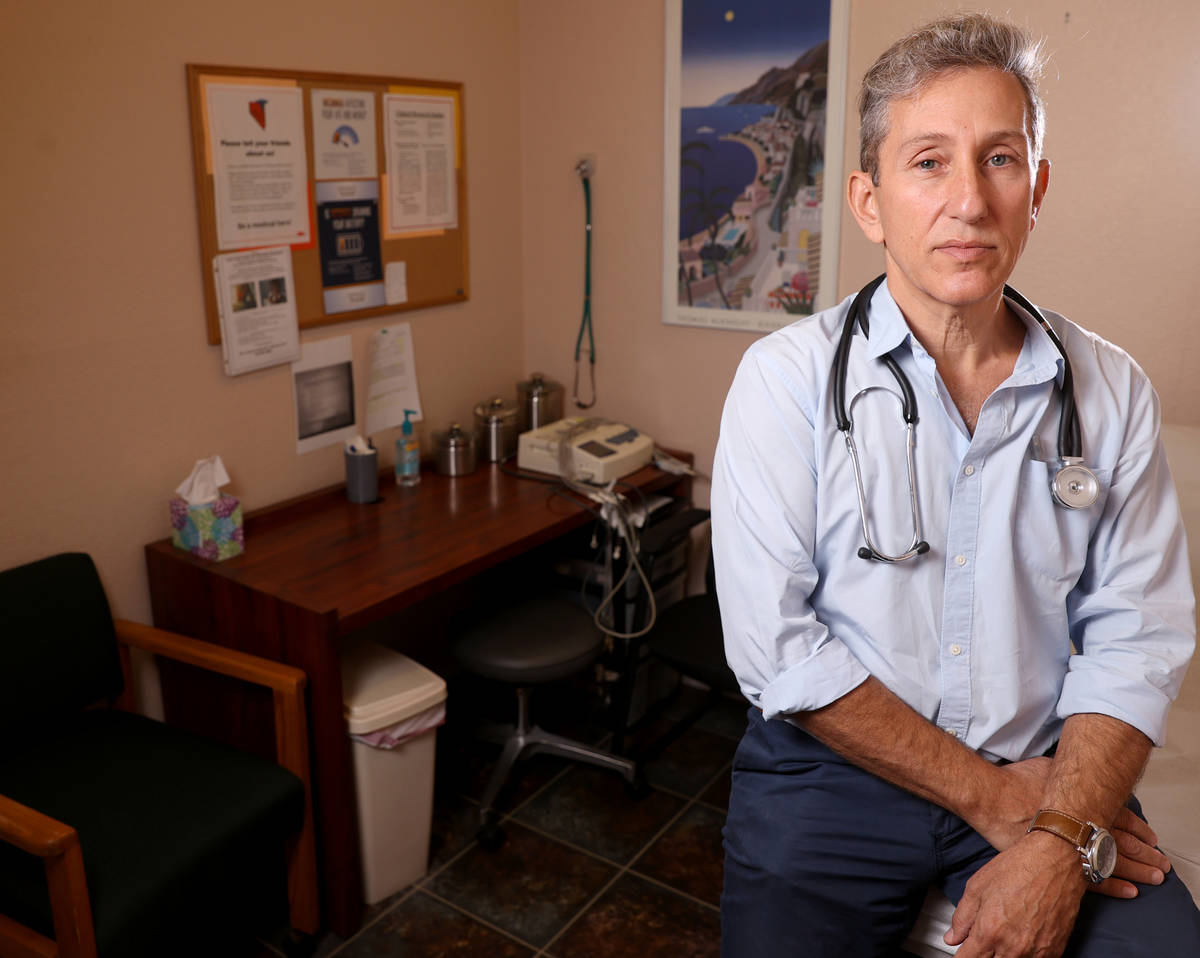 Dr. Michael Levin at Wake Research-Clinical Research Center of Nevada on East Sahara Avenue in Las Vegas Wednesday, July 29, 2020. Levin is the primary investigator at the site, which is one of nearly 100 sites across the country involved in a trial for a COVID-19 vaccine developed by Cambridge, Mass.-based biotech company Moderna in conjunction with the National Institute of Allergy and Infectious Diseases, the federal agency led by Dr. Anthony Fauci that is part of the National Institutes of Health. (K.M. Cannon/Las Vegas Review-Journal) @KMCannonPhoto 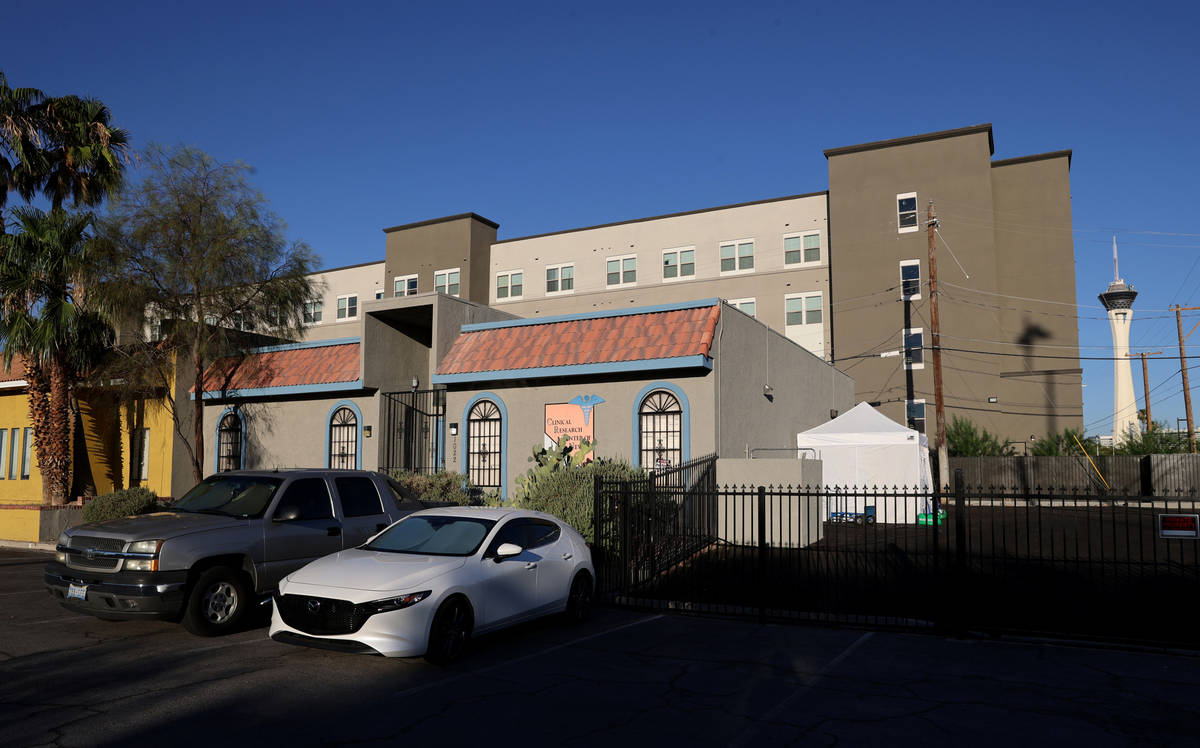 Wake Research-Clinical Research Center of Nevada on East Sahara Avenue in Las Vegas Wednesday, July 29, 2020. Dr. Michael Levin is the primary investigator at the site, which is one of nearly 100 sites across the country involved in a trial for a COVID-19 vaccine developed by Cambridge, Mass.-based biotech company Moderna in conjunction with the National Institute of Allergy and Infectious Diseases, the federal agency led by Dr. Anthony Fauci that is part of the National Institutes of Health. (K.M. Cannon/Las Vegas Review-Journal) @KMCannonPhoto

Late-stage trials of a COVID-19 vaccine are expected to be far enough along by November for biotech company Moderna to seek Food and Drug Administration approval for the vaccine’s emergency use, the lead investigator for trials in Las Vegas said late Wednesday.

His comments were echoed Thursday by Moderna during its quarterly earnings report, when the Massachusetts-based company said it expected preliminary trial results to be reviewed next month by an independent data monitoring committee prior to it seeking emergency authorization, Reuters reported.

The Las Vegas investigator, Dr. Michael Levin, said that by November, a sufficient number of the 30,000 participants in Moderna trials nationwide are expected to have contracted COVID-19 for there to be an initial analysis of whether the vaccine is effective.

Half of the participants in the trials receive the actual vaccine and half receive a saline placebo. The trials are double blinded, meaning that neither the participants nor those conducting the trials know who received the actual vaccine until the study is “unblinded.” Then the results between the two groups can be compared to see if the vaccine offered protection to those who received it.

“If it looks good, they’ll ask for the emergency FDA approval,” Levin said.

A preliminary assessment will be done when 53 volunteers nationwide have contracted COVID-19. So far during the Las Vegas trials, only one participant has contracted the coronavirus, said Levin, who heads the study at Wake Research-Clinical Research Center of Nevada. There are nearly 100 trial sites across the country.

The Moderna vaccine, developed in conjunction with the National Institutes of Health, requires two shots about a month apart. Of the 491 participants in the Las Vegas study, approximately 25 did not receive a second shot. Some participants were unable to receive it because they were experiencing elevated blood pressure, for example, or had skin cancer biopsies; participants must be in stable health. There also were some logistical issues, such as a temporary shortage of the tubes needed to take samples of blood and saliva.

The Moderna vaccine is one of several in late-stage human trials in the U.S. Pfizer, which also has a vaccine in late-stage trials, has said it also expects to seek emergency use authorization by November. If the FDA deems a vaccine to be both safe and effective, the federal agency could permit its use broadly or narrowly, for only frontline health care workers, for example.

Both the Moderna and the Pfizer vaccines contain genetic material that scientists believe will provoke an immune response that fights the virus.

Under Operation Warp Speed, a Trump administration program to hasten vaccine development, the federal government plans to purchase millions of doses of a safe and effective vaccine with the expectation of making initial doses available by January. A vaccine is not expected to be widely available until months after the first doses are delivered.

Levin said the Las Vegas research center is conducting trials for another COVID-19 vaccine and is poised to launch new trials for a third vaccine. He said he was not authorized to provide details.

One of the participants in the Las Vegas trials, 91-year-old Ruth Sidorowicz, said she’s eager to learn whether she received the actual vaccine or the placebo.

To protect herself from the virus, she has taken a hiatus from her “Barely Legal” bowling team in a seniors league. But once she knows that she has received a vaccine found to be safe and effective, she plans to return.

“I won’t go back to bowling until I know it’s not bad for me,” she said.

Those interested in participating in a Wake Research-Clinical Research Center study related to COVID-19 can text “COVID” to 702-357-9650 or visit covidstudies.org.