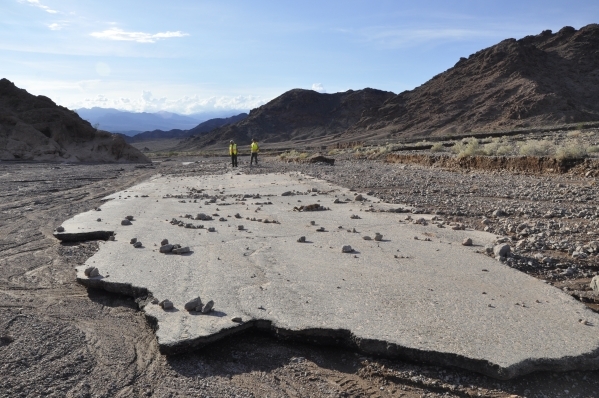 Workers survey the damage from an October flash flood along Badwater Road near Jubilee Pass in Death Valley National Park. The road is expected to remain closed until June between Shoshone, Calif., and the southeastern end of the park. Photo courtesy of the National Park Service 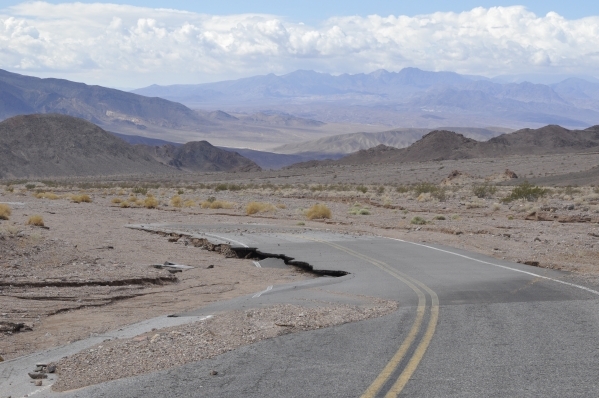 A photo from October shows a flood damaged section of Badwater Road near Jubilee Pass in Death Valley National Park. The road is expected to remain closed until June between Shoshone, Calif., and the southeastern end of the park. Photo courtesy of the National Park Service 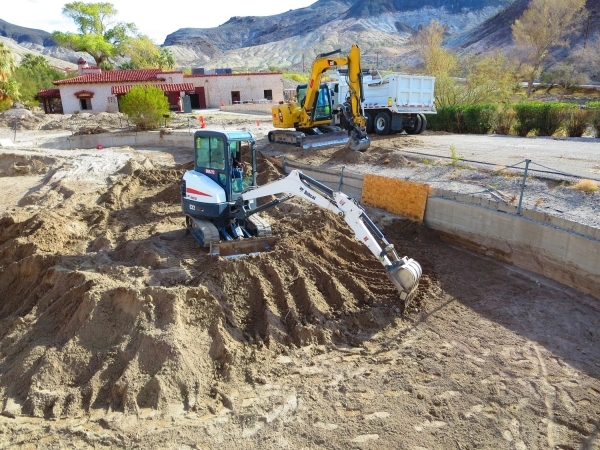 Heavy equipment removes mud and flood debris from the historic swimming pool at Scotty‘s Castle in early December. The popular 1920s mansion in Death Valley National Park might stay closed until fall 2016 because of the flash flood in October. Danielle Dawson/National Park Service

Three months after flash floods hammered Death Valley, one of the national park’s main attractions and two of its paved entrance roads remain closed, and they’re expected to stay that way well into 2016.

More specific estimates won’t be available until construction contracts have been awarded for the road repairs, she said.

Wines said Scotty’s Castle could partially reopen to the public in the fall, but a lot of work remains to be done.

Although the 90-year-old mansion suffered only minor water damage from a small leak in the roof, surrounding buildings and infrastructure were hit hard by the October flash flood.

The raging torrent ripped out one mile of water line, toppled 29 power poles and wiped out the sewer lines and parking lot at the castle. Mud and debris reached the door handles and windows of some buildings. The visitor center, bookstore, offices and exhibits all sustained flood damage.

“It is likely to be a few years until everything is repaired to preflood conditions,” Wines said in an email.

Death Valley officials are calling the October event “the most expensive natural disaster in park history,” with damage in the tens of millions of dollars.

Road repairs alone in the 3.4 million acre park 100 miles west of Las Vegas are expected to cost $12 million to $15 million.

Wines said the park has secured Federal Highways Administration funding to pay for the work. At least some of that money will be used to reinforce portions of Badwater Road that have been damaged by flooding three times in the past 11 years.

Wines said the storms in October washed away sections of pavement and road bed in several places along a 19-mile stretch of road that remains closed between Shoshone, Calif., and the southeastern end of the park.

Some of the same sections of road also were washed away in 2013.

Long road closures because of flash floods are not uncommon in a place so unaccustomed to sudden downpours.

The floor of Death Valley averages less than 2 inches of rain a year, but more than an inch fell in just a few days at the park’s official weather station at Furnace Creek during what turned out to be the wettest October on record there.

The flood at Scotty’s Castle — 55 miles north and 3,000 feet above Furnance Creek — was triggered by more than 3 inches of rain and hail in five hours.

In August 2004, a powerful storm flooded the canyon east of Furnace Creek, killing two people and destroying a stretch of California state Route 190, the fastest route between Death Valley and Las Vegas. It took eight months and $10 million to reopen the road.