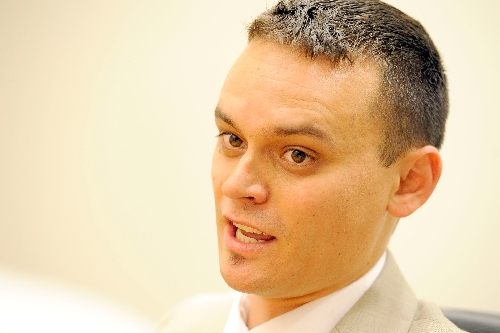 CARSON CITY – Sam Koepnick won the June Democratic primary in the 2nd Congressional District after spending just $17 on his campaign.

So far, he’s been recognized twice in public.

His anonymity doesn’t bother him. Koepnick knows chances are slim that he will beat GOP incumbent Mark Amodei on Nov. 6. But he hopes his new media campaign, which incorporates the Internet, Facebook, Twitter and a little help from his friends, will generate a respectable number of votes.

He also hopes his campaign will be an example of how campaigns should be conducted and plans to show no disrespect to his opponent. He isn’t going to knock on doors, send out circulars or run scandalous advertising to win votes. Koepnick also isn’t accepting campaign contributions – any money he spends will come out of his own wallet.

It’s his reaction to what he sees happening in Washington, D.C. Utter partisan chaos doesn’t benefit the public, Koepnick said. After a presidential election, members of the opposition party do everything they can to keep a new president from winning a second term. The partisanship has lawmakers, both Democratic and Republican, opposing legislation that might help the people, he said last week.

“It’s like football. Things don’t pass because you don’t cooperate with the other team. Each party is so extreme now that you can’t have a moderate opinion. I was a Republican and I voted for President Bush the first time he ran.”

Koepnick plans to say what he really believes during his run for office, rather than filtering his views to please a particular mindset.

“I am not partisan,” Koepnick said. “I think both parties have a lot of moronic geeks.”

Seventy percent of voters will cast their ballot for the word – Democrat or Republican - that follows the candidates’ names, regardless of what the other candidates say, he added.

Koepnick has already had a taste of partisan criticism – some Democrats think he’s a Republican plant to make sure Amodei gets an easy win, he said.

“You wouldn’t need a plant for Amodei to win in this district,” quipped Koepnick, a 31-year-old Internet technician for the state Division of Water Resources. “Amodei has done a good job representing the people in Nevada.”

A Democrat has never won the seat in the district – now entirely in Republican-dominated Northern Nevada – since it was first contested in 1982.

Fred Lokken, a political science professor at Truckee Meadows Community College, said Koepnick would not get Democratic Party support even if he wanted it. Political parties today don’t give money to candidates who have no chance of winning. They also may not field candidates in races where the other party has a decided registration edge.

Nine legislative seats this November have only one candidate on the ballot because the other side figured it would lose anyway.

Amodei called Koepnick “a nice guy” when questioned about his opponent at a recent political rally. His office did not respond to a request for additional comments from Amodei about his longshot opponent. Neither did the Democratic Party.

Voters don’t want to hear the kind of negative ads that crop up every time they turn on their TVs, Koepnick said. And they don’t pay attention to the ads they receive in the mail.

At a recent wedding reception he met a woman who questioned how he could be running when she had not received any mail or robo-calls from him. When he told her he wasn’t doing that, she thanked him.

Koepnick met Amodei for the first time a few weeks ago at a meet-and-greet event at the Hilton in Reno. He left impressed.

“I really like him as a candidate,” Koepnick said. “If I am going to lose, I would rather it be to him.”

He and Amodei were the only people wearing blue jeans at the appearance.

“We joked we were the only under-dressed people there,” said Koepnick, a self-proclaimed nerd who rides a motorcycle to work.

Koepnick and Amodei are scheduled to debate during an Oct. 18 televised event. The Democrat said he figures it should be a congenial exchange of ideas about what it will take to jump-start Nevada’s economy.

A Reno native, Koepnick won a full scholarship and earned a master’s degree in archaeology from Texas A&M in 2009. Over the years, he has gone on digs to Egypt, the Caribbean, Spain and Portugal, working mainly as the expeditions’ computer whiz.

Because the economy turned sour, he isn’t off looking for Bronze Age artifacts now. He came home to Nevada after college and quickly found his job with the Division of Water Resources.

He said he loves his work and feels fortunate he has a career to “fall back on” after the election.

Some fellow office workers wander back to his desk to tease him about the election and argue about politics.

■ Medicare: He would apply a means test so wealthy people could not receive it. But for others, Medicare should not be changed. “They were told if they would work now, then we will take care of them later.”

■ Government spending: He would dramatically reduce military spending. He doesn’t understand why troops in Afghanistan are not brought home immediately.

■ Abortion: He calls himself anti-abortion and pro-choice. While he opposes abortion himself, he would not impose that on others. Koepnick is single and dating and believes that ultimately the decision rests with the woman.

■ Bush tax cuts: He favors continuing the tax cuts for people with incomes less than $200,000.

Also, as an archaeologist and through his study of anthropology, Koepnick has concluded that “race is self-identification.”

“I think the old guard still is mad we allowed a black man to be president. I have never seen such hatred for a president, like for President Obama. You respect the office, not necessarily the man in the office. He is the face of us to the world.”