When Sarah Cooper’s students asked for permission to do complex engineering projects for her science class, she often had to say no because of a lack of materials.

Cooper teaches at Southeast Career Technical Academy, a Title I magnet school in the southeast Las Vegas Valley where over half of all students come from low-income households, and materials needed for hands-on, engaging science classes aren’t always available.

But that situation will change for the better after Cooper last week was awarded a $3,000 grant from the Society for Science & the Public that will allow her to buy tools like a 3D printer to make more of those projects possible.

“It opens a lot of doors for my students,” Cooper said. “It means that maybe they can compete on the next level.”

With the money, she also plans to purchase basic robotic kits, air quality testing tools and even an incubator for a student who’d like to study transmutation.

She said she wrote the grant with big-ticket items in mind that will promote student engagement for years to come. On the teacher fundraising site DonorsChoose, she’s also seeking atom modeling kits for her class for the same purpose.

Cooper said she’s especially proud of students who make connections between science and their own career paths in areas like automotive service, sports medicine or cosmetology. For example, she recalled one group of students who decided to study the optimum time to bleach hair before dyeing.

“That for me is what it’s all about,” Cooper said.

Maya Ajmera, president and CEO of the Society for Science & the Public, said the organization gave 28 teachers across the country a total of about $100,000 in grants this year, with preference given to schools serving low-income or underrepresented students.

“You might not have the funding and the resources for teachers who are really motivated to take their students on scientific journeys,” Ajmera said.

Teachers who receive the grants use the money for a variety of needs, including covering transportation costs to local colleges, conducting research and purchasing everyday materials like pipettes and beakers, according to Ajmera.

Ajmera said the grants are one part of the organization’s larger goal of promoting equity in the STEM field while offering support to teachers who want to teach science — an in-demand role in the Clark County School District and across the country.

“We want to make sure every young person in this country can become a scientist or engineer if they want to,” Ajmera said. 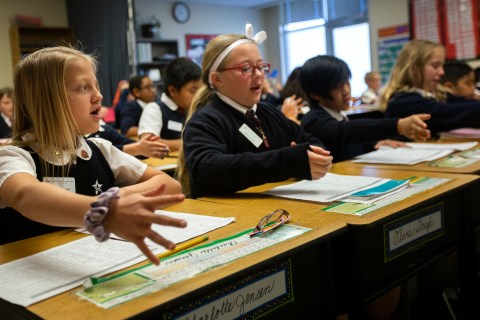