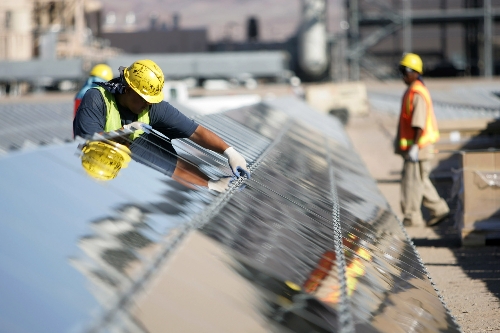 Ramat Shabahang is the lead instructor for College of Southern Nevada’s Power Utility Program, an associate degree level offering in the engineering technology department of the school. It’s a program that can blend in and even go overlooked in the school, which like many other colleges and universities has answered the industry’s demands for more STEM (science, technology, engineering and math) minds needed in the workforce.

The tract prepares students for careers in the utility field. For many, green jobs come to mind when words such as “power” or “energy” are mentioned. But there’s a lot more to the field, and some sources say there will be plenty of job opportunities in both green and traditional energy generation settings for the next five years.

Mary Miller, chief administrative officer for Edison Electric Institute, an industry association of shareholder-owned electric companies that includes NV Energy, pointed to a recent study from the Center for Energy Workforce Development. The study noted that about one-third of the roughly 200,000 energy industry jobs around the country will become vacant because of retirement. Miller herself estimated it will be between 35 and 45 percent of the industry and says the movements should occur in the next five or six years.

“There’s no room for error. These are people we’re going to have to grow,” Miller added. “There was a time in the industry where people were able to fill these positions by poaching. That’s not the case anymore.”

Stephen Brown, director for the Center for Business and Economic Research at the University of Nevada, Las Vegas, studies the energy industry as an economist. From his more recent observations, he sees a utility workforce made up primarily of workers in their 60s and others in their 20s and 30s with very few in the middle. Brown also said weak energy pricing from the early ’90s to 2005 made the field less attractive. Now, older workers who toughed out the lean years are ready to leave, and there are few to replace them.

Formed in 2006, the CEWD is a nonprofit consortium of EEI members and other utilities and cooperatives around the nation with the goal of helping to build the next generation of energy workers. Initially, the group reached out to high schools and middle schools to make students aware of careers in energy and to encourage them to take the right course mixes if they were interested in the field. Those efforts were successful, and now the consortium is moving on to creating curriculum and partnering with colleges to educate new utility industry workers.

Miller said positions such as power plant operators, operations managers, maintenance technicians, welders and line workers will be the primary demand areas. She described them as “highly skilled jobs, not entry level opportunities.” But they also are skilled positions that don’t necessarily require a four-year degree. Miller said community colleges such as CSN are a huge partner for the CEWD.

“More often than not, those attracted to our positions are those not necessarily en route to a four-year traditional education,” Miller added.

According to a CEWD survey, a plant operations position for someone with a high school diploma and associate degree can see a salary range between $30,000 and $75,000, depending on knowledge and experience. At a nuclear power plant the range jumps from $70,000 to $85,000. Maintenance positions can make up to $70,000 and line workers can make up to $80,000.

Miller has seen some line workers make more than $100,000 with overtime. Those with a bachelor’s degree in an engineering discipline make between $52,000 and $105,000, according to the survey.

CEWD also has placed an emphasis on training the veteran population for utility jobs with its Troops to Energy Jobs initiative. Veterans with management and technical experience often simply need a few classes to fill in knowledge gaps, and many also understand some of the labor demands of the positions, according to Miller.

“It’s no longer a case of ‘Go get an associate degree, and we’ll talk to you then,’ ” she added.

Programs such as the one Shabahang helps oversee at CSN will continue to be important to the industry. On average the program has about 20 declared majors at any given time, Shabahang said. About 60 percent of the students find jobs locally. Some actually find jobs at nearby Hoover Dam, he added.

The program was initiated about 10 years ago with some online classes but was formalized into an associate degree six years ago at the request of students who wanted more hands-on experience.

The program also sees its share of students who already work in the industry but whose employers send them in for more training. The power utility program has a strong math, science and human relations emphasis and involves hands-on internships both in electricity operations/generation and in hydroelectricity.

Many of the jobs Shabahang hears about students getting after graduation see pay in the $35-per-hour range. Good benefits also are another driver for interest in the program. Utilities, despite critics knocking them for it, often have very solid pension plans for employees, too.

“Many of these people can work 15 to 20 years and retire with very good benefits,” he added.

The program also brings other options for graduates who might not choose the utilities route. Experience in hydraulics makes them a good fit in other local industries. And the overall exposure to many different types of technical applications like industrial electricity, mechanical power transmission and electrical and mechanical maintenance experience can be applied to a variety of facilities like major resorts or other types of sophisticated buildings.

“At this level we are teaching basic courses in power utility. Someone taking hydraulics, for example, should be able to apply all those principles to other industries as well,” Shabahang added.

It’s a conversation that has piqued curiosity in many a job seeker. Some $80 billion in American Recovery and Reinvestment Act dollars have been set aside for clean energy. Solar power, in particular, has made huge strides both on the technology and pricing front in the past decade.

But solar’s greatest proponents still say it lags on the pricing front despite being more affordable than ever today. And that is likely the reason many solar jobs around the nation are slow to come.

Robert Boehm, director of UNLV’s Energy Research Center, likes what he sees on the innovation front when it comes to solar power. He remembers about two decades ago it was nearly impossible to find someone to install a solar array on a home in town. Today, there are plenty of options.

But those companies aren’t adding a large number of jobs. Most of the 6,500 solar installation companies around the country only employ about two or three installers, according to industry trade group The Solar Foundation. Most of the installation positions can usually be filled by those with construction experience and salary ranges vary from about $30,000 to $45,000 annually, according to PayScale.com, a salary survey website.

Solar panel manufacturing also is a slow-growth industry right now. Boehm suspects that manufacturers are turning down Southern Nevada because they are getting better tax credits and other incentives from other states.

He also believes the weak K-12 school system and the city’s image aren’t helping matters. Last year’s closure of Amonix’s photovoltaic panel manufacturing plant in North Las Vegas also was a negative, more so for the solar industry as a whole, not so much Las Vegas.

After taking about $20 million in federal subsidy, the plant closed last summer after only 14 months of operation. At its peak it had about 700 employees. Most of the manufacturing positions paid between $12 and $14 per hour, according to media reports.

Overall, solar jobs nationally appear to be growing, according to The Solar Foundation. In its November 2012 report, it touted 13,872 new jobs created in the U.S. solar industry over the past year; it now employs nearly 120,000 workers.

The report also noted that about 45 percent of solar companies are looking to hire in the coming year, and only about 4 percent plan on cutting positions. Installation counts for about half of the nation’s solar workforce and is the bright spot as far as growth is concerned, balancing some setbacks such as Amonix on the manufacturing side.

Boehm does believe more system installers, solar plants and manufacturers will continue to gravitate toward the Nevada sun. But solar plants are usually created by outside companies to generate power that is sold to entities outside the state. And the number of jobs the plants create are negligible, he added.

“They essentially developed the PV (photovoltaic) business out of thin air. They’re now the second largest producer in the world.  The key is they have these industrial parks that have been making electronics for a long time throughout the country. There are a lot of support companies that can make whatever you need,” he added.