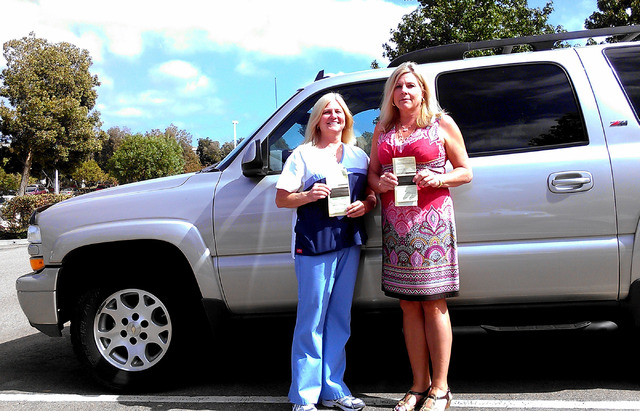 Gina Borchers, right, and her sister, Donna Kanehl, pose with the tickets they were issued Saturday when they entered an area of Red Rock Canyon National Conservation Area closed due to the government shutdown. (Courtesy Gina Borchers) 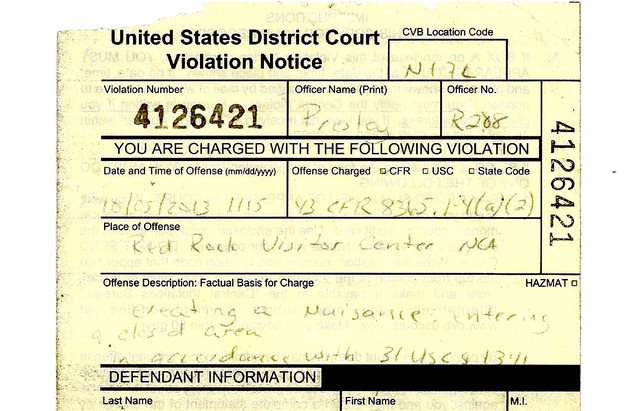 Detail of the ticket that Donna Kanehl was issued when she and her sister, Gina Borchers, were caught inside Red Rock National Conservation Area on Saturday. (Courtesy Gina Borchers)

The government was shut down, but the great outdoors was still open. So Gina Borchers and her sister decided to duck under the locked gate at Red Rock Canyon to go for a hike.

Then the two tourists from Southern California ran across a law enforcement ranger who decided to make a federal case out of it.

Borchers said she and her sister, Donna Kanehl, 53, were ticketed by a Bureau of Land Management officer for “creating a nuisance” by entering the closed Red Rock Canyon National Conservation Area on Saturday.

“Obviously we were bad, bad old ladies with our visors and our water bottles,” the 55-year-old said.

The citation could wind up costing each of them $275, though Borchers might challenge hers in federal court.

“We were not trying to get away with anything. We were walking,” she said. “We’re not the kind of ladies who get into trouble.”

The two came to town for a dental convention and were staying at the Luxor. Borchers said their run-in with the law put a damper on the rest of their trip.

They planned to hike for an hour or two, but about 20 minutes into their walk they heard the ranger’s voice booming over a loudspeaker on his vehicle.

“I thought he was going to tell us to be careful or watch out for rattlesnakes,” Borchers said.

She works for the city of San Clemente, Calif., so she knows a little something about how government employees can — and should — interact with the public.

“The ranger had many responses to choose from and with us; he decided to choose a particularly harsh one,” she said. “He was all puffed up and angry.”

The man asked them whether they had seen the “Area Closed” signs. Then he asked them for identification.

When they told him their IDs were in their vehicle, he drove behind them “at one mile an hour” as they hiked back to retrieve them, Borchers said. “The whole walk of shame.”

She insists they did nothing to provoke the officer.

“We were very, very apologetic,” she said. “He scared us. We may have peed a little bit, but we didn’t mouth off.”

Borchers said she tried to take the fall for both of them. After all, it was her idea to ignore the signs and cross under the gate.

“I stupidly thought that just meant the visitor center and the road were closed. I stupidly didn’t think that meant everything is illegal,” she said. “I was wrong. I was absolutely wrong.”

But she certainly wasn’t alone. The closure has pushed visitor traffic to other parts of the almost 200,000-acre conservation area, but it certainly hasn’t kept people out.

Borchers said she met several other tourists over the weekend who reported being treated rudely by Red Rock rangers, but none of them received citations.

Tod Story, executive director of the American Civil Liberties Union of Nevada, couldn’t address the specifics of this case, but he said people should follow the law and pay attention to signs posted by the government on public lands.

The larger issue is the shutdown itself, Story said. “It’s ridiculous that access is being restricted based on the Congress not being able to reach an agreement on the budget.”

It’s unclear how many citations the BLM has issued at Red Rock Canyon since the gates were locked at the scenic loop and elsewhere on Oct. 1.

BLM officials could not be reached for comment. The public information officers for both the conservation area and the bureau’s Las Vegas field office are on furlough. BLM’s website is offline.

The Lake Mead National Recreation Area also is closed, but its spokeswoman, Christie Vanover, remains on duty. She said that as of Tuesday morning, the National Park Service had issued about 300 warnings — roughly 50 of them in writing — to people found inside the 1.5 million-acre recreation area without authorization.

She only knew of one citation, which she said was issued early in the shutdown to a man found hauling rock out of the recreation area near Nelson’s Landing, south of Boulder City.

Borchers said her experience on Saturday won’t sour her on Las Vegas or Red Rock Canyon. She owns a rental home in the valley and still wants to live in it full time after she retires.

In the meantime, she plans to keep coming here for weekend getaways and the occasional federal court appearance.

But her little sister might take some convincing. Apparently Kanehl is a little ticked at Borchers for leading her astray.

“I’m never going to live this down. She’s only mentioned it a hundred times a day every day since it happened,” Borchers said. “She’s already threatening to tell our mother.”