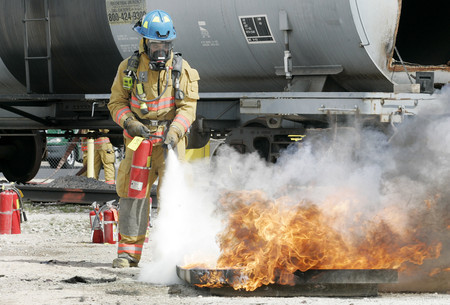 As Clark County struggled with a tightening budget in a slumping economy, it continued to shell out hefty salaries and severance packages last year to many employees, especially firefighters.

Firefighters ranked prominently among the county’s top earners, a trend that isn’t likely to change in this year’s tougher financial climate. Firefighters accounted for 32 of the 50 highest paid employees in the 2008 calendar year, and 35 of the top 50 in 2007, according to county data.

Two firefighters who left after being disabled on the job head the 2008 list.

Danny Ganier, a battalion chief, received $594,658, and Floyd Walch, a fire captain, received $535,754. Each qualified for two years’ pay as a disability benefit upon leaving their jobs, beefing up their earnings for the year.

Thirty-two firefighters made more than $200,000 in 2008, and 22 pulled in more than County Manager Virginia Valentine.

"That should not be surprising," said Don Burnette, the county’s chief administrative officer, referring to firefighters being in the top tier.

A conservative think tank contends that the high wages underscore the need for the firefighters to make a substantial contract concession the way other county unions have.

"They’re the lone holdouts," said Geoffrey Lawrence, researcher for the Nevada Policy Research Institute. "They’re not willing to relinquish cost-of-living increases, even though the (area’s) cost of living is going down."

Last month the firefighters union offered to reduce their 3 percent cost-of-living raise by 1 percentage point in return for two more paid-leave days and a two-year contract extension. Cost-of-living raises are negotiated into a contract and are not based on inflation.

The union also offered to forgo a $4 million security system at fire stations so the money could be used on other Fire Department projects.

County commissioners rejected the proposal, saying it would yield no real savings.

"I haven’t heard any response back," said Ryan Beaman, president of the International Association of Firefighters Local 1908, adding it must not be a high priority for them. Beaman wouldn’t say what he might consider a reasonable counteroffer.

However, all three cities offer their firefighters a higher base pay than the county does.

After they hit the ceiling, county firefighters still get a 3 percent "cost-of-living" bump, a 1.75 percent raise to cover part of their contribution to the retirement system and bonuses for various certifications. Many receive longevity, overtime and callback pay, which is common for union firefighters across the nation.

Some of the best-paid Clark County firefighters are captains and battalion chiefs who, despite their higher rank, are covered under labor contracts and qualify for overtime pay.

Although they have supervisory skills, they are not technically managers, Fire Chief Steve Smith said.

Captains and battalion chiefs work 24-hour shifts, as rank-and-file firefighters do, as opposed to managers whose salaries are based on eight-hour shifts, Smith said.

There is a limited supply of these higher-ranking firefighters, and hiring restraints imposed by the county prevent him from adding more. So when one of them is sick or on vacation, Smith said, one of their peers has to be called in to do the job. "I have to fill that with an overtime position," he said.

Beaman said the county has opted to pay overtime rather than increase staffing. The county is opening a new fire station without adding personnel, a move that’s sure to swell overtime costs, he said.

The county’s overall labor costs this year probably will be as high as last year’s, despite managers’ salaries being frozen, several hundred jobs remaining vacant and union workers having their cost-of-living raises reduced to 1 percent from 3 percent, Burnette said. That’s because workers’ wages still will increase by an average of 4 percent because of other raises, even with the smaller cost-of-living bump, he said.

Burnette noted that the top 10 employees on the list were managers or longtime employees who received separation pay that pumped up their 2008 earnings.

Most departing employees’ separation pay comes from cashing in accrued leave, which can be considerable if they’ve worked at the county a long time, Burnette said.

Firefighters who are disabled on the job can receive two years’ wages — if a county doctor approves — plus money from cashed-in leave, Beaman said. He noted that older firefighters commonly suffer back injuries, heart trouble and respiratory problems.

That’s on par with Las Vegas, which lost three firefighters last year because of work-related disabilities.

Disability pay and cashed-in leave accounted for most of the money that the county’s top two earners, Ganier and Walch, got in 2008.

The Nevada Policy Research Institute confused some readers when it included county employees’ benefits under "total pay" for 2008 on its TransparentNevada Web site.

Burnette said it was misleading to characterize benefits, such as vacation, health care and retirement, as part of an employee’s pay.

"It’s a cost to taxpayers but it’s not pay," Burnette said. "Pay is what you put in your pocket."

The institute compounded the confusion by not counting benefits in employees’ 2007 earnings but then lumping benefits into 2008 wages. That made it appear as though many employees had gotten a large pay raise in 2008.

One example: the county manager.

The group has since revised its main heading for 2008 to say "total pay and benefits." An inside Web page also notes that separation pay is included for workers who left that year.

Lawrence, the policy researcher, said benefits should be listed because they are part of the compensation package and influence a person’s decision to take a job. Benefits also can offset a lower wage, he added.

But when Burnette requested that the Nevada Policy Research Institute make clear to viewers that it combined the county’s 2008 pay and benefits on the main page, Lawrence agreed to promptly make the changes.

"I didn’t see any problem with that request," Lawrence said, adding that the group never intended to mislead or confuse. "It was actually more accurate."