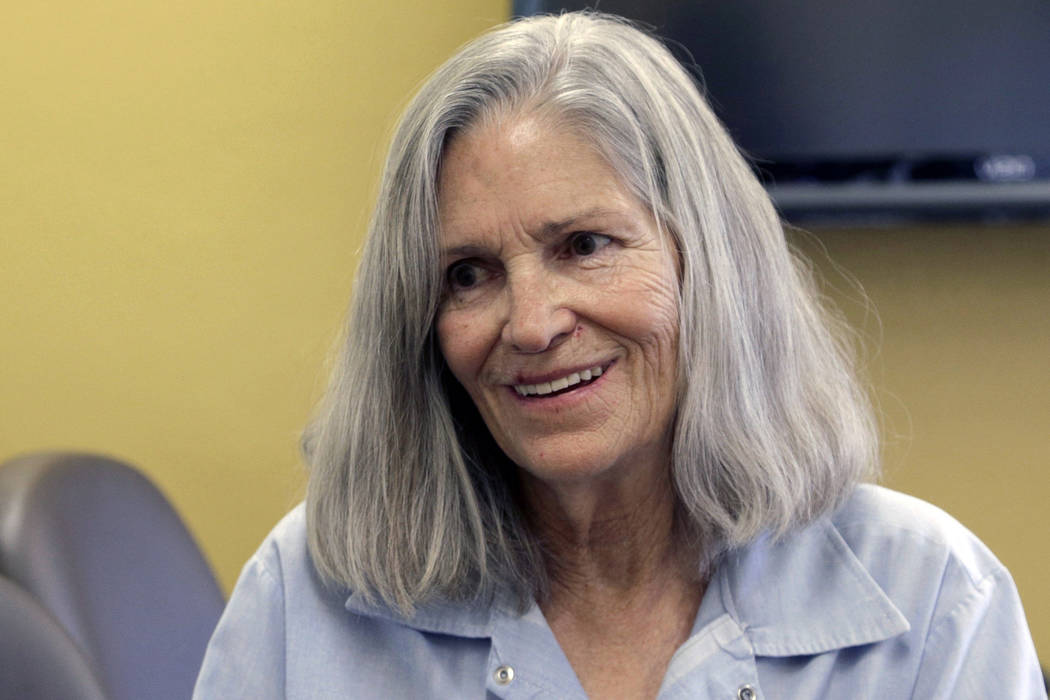 Former Charles Manson follower Leslie Van Houten confers with her attorney April 14, 2016, during a break from her hearing before the California Board of Parole Hearings at the California Institution for Women in Chino, California. (Nick Ut/File, AP)

CHINO, Calif. — Leslie Van Houten, the youngest of Charles Mason’s murderous followers, was granted parole by a California board Wednesday.

Van Houten, who was 19 when she killed for Manson during a series of murders that terrorized Los Angeles over the summer of 1969, appeared before a parole panel for the 21st time.

The decision now goes through a process of review in which Gov. Jerry Brown may uphold, reverse or modify the decision. He could also send the matter to the full Board of Parole Hearings, or take no action, in which case the parole decision would stand.

A similar panel at the California Institution for Women in Chino, where Van Houten is incarcerated, granted her parole last year but was overruled by the governor.

Van Houten has candidly described how she joined several other members of the “Manson Family” in killing Los Angeles grocer Leno La Bianca and his wife, Rosemary, in their home on Aug. 9, 1969.

She was not with Manson followers the night before when they killed pregnant actress Sharon Tate and four others during a similar bloody rampage.

At her parole hearing last year, Van Houten said she helped hold down Rosemary La Bianca while another Manson follower stabbed her repeatedly. She then took up a knife herself and added more than a dozen stab wounds.

“I don’t let myself off the hook. I don’t find parts in any of this that makes me feel the slightest bit good about myself,” she said.

Since she was incarcerated more than 40 years ago, Van Houten has been a model prisoner and earned college degrees.

Members of the Tate and La Bianca families have argued repeatedly, however, against granting parole to her or any other Manson follower who took part in the killings.

None has been freed, and one, Susan Atkins, died in prison in 2009. Manson, now 82, remains behind bars.

In overruling the panel, Brown said Van Houten had failed to adequately explain how a model teenager from a privileged Southern California family could have turned into a ruthless killer.

Van Houten was both the youngest and also seemingly the most unlikely member of Manson’s so-called family.

She had been a high school homecoming princess, athlete and cheerleader before dropping out of school and joining the ragtag band of ersatz hippies who considered Manson, a career con man and petty criminal, to be a Christ-like figure.

She has testified that the trauma of her parents’ divorce, her teen pregnancy and other problems led her to drop out of school, run away from home, become involved in drugs and eventually join Manson’s cult.

In an attempt to bolster her chances for release, Van Houten’s attorney put another former Manson follower, Catherine Share, on the witness stand at a court hearing in Los Angeles last week at which she testified Van Houten was so young and impressionable that she was afraid to leave the cult.

“Some people could not leave. I was one of them that could not leave,” said Share, who added Manson threatened to have her tortured and killed if she tried.

Share, who didn’t take part in the killings, added she believes Van Houten was also afraid to leave. She said she regretted encouraging her to join the cult.