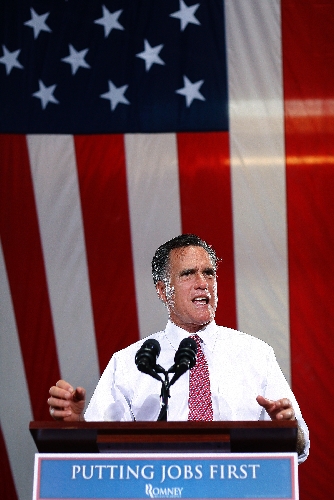 About 80 people, including gaming billionaires Sheldon Adelson, Steve Wynn and Phil Ruffin, showed up at a private $50,000-per person fundraiser that helped raise $2 million for Romney.

The gathering was held at the Park Towers penthouse of Tim Poster, executive vice president at Wynn Las Vegas.

Poster said he expected a turnout of about 20 for the big-ticket fundraiser. “It wasn’t just Republicans. A lot of Democrats came,” he said. “It was definitely not a partisan crowd.

“There’s so many people worried about the direction the country is going and see where Obama is taking us,” he added.

Poster said one of the evening’s more lighthearted moments came when Trump was spotted posing in front of a replica of the White House made from cake by Wynn pastry chefs.

“Trump instructed a photographer to take a lot of pictures of him by the White House. We all got a big kick out of that,” Poster said.

Asked whether Trump’s “birther” issue overshadowed Romney on a day when the latter clinched the GOP nomination, Poster said that Trump was “baited” by the media.

“I don’t think it’s Trump out there pushing it as a story,” he said. “That’s the only thing the mainstream media wants to talk about.”

Andy Cohen, the Bravo network executive behind the “Housewives” franchises, is signing his memoir, “Most Talkative: Stories from the Front Lines of Pop Culture,” from 7-9 p.m. Friday at the Queue Bar at The Cosmopolitan.

Film legend Rhonda Fleming discusses her May 1957 debut at the newly opened Tropicana during Ira David Sternberg’s “Nighttime With Ira” radio show tonight at 9 p.m. on KUNV-FM (91.5) or online at www.kunv.org. She was in four films with Ronald Reagan.

“It was announced today that they’re auctioning off the Elvis tomb. The auction house in Memphis actually is selling the place where Elvis left the building. He’s not in there, of course, because he’s working in a gas station in Henderson, Nevada.” – Craig Ferguson