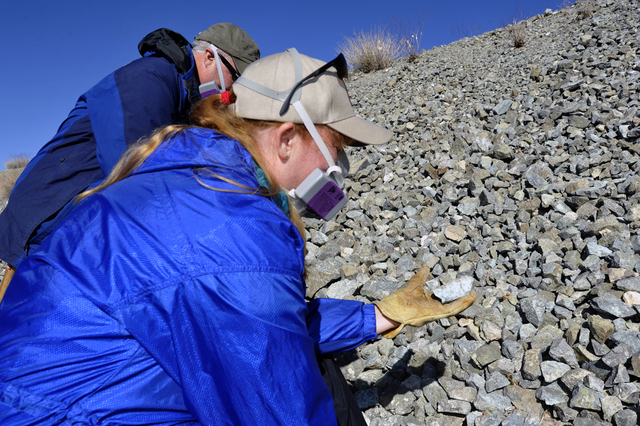 UNLV professors, Rodney Metcalf, Ph.d, Geology and Brenda Buck, Ph.d., Soil Science examine rocks for naturally occurring asbestos, Saturday, Dec., 21 2013 in southeastern Boulder City. Buck is the author of a paper on the discovery of the substance in the grouind around Boulder City and the southeastern edge of Las Vegas. Steve Andrascik/Las Vegas Review Journal

Removing asbestos from an old building can be hazardous and expensive. So what happens if the ground outside is covered with the stuff for miles around?

That’s what a team of UNLV geologists is trying to figure out after the surprise discovery of potentially toxic, asbestos-type minerals in rocks and dust from Boulder City to the southeastern edge of the Las Vegas Valley.

A peer-reviewed study detailing the find was published last month in the journal of the Soil Science Society of America.

So how worried should everyone be?

“At this point we know enough to know there is a hazard. We don’t know what the risk is,” Buck said. “There’s a lot of work that needs to be done. Until we know more, it would be a good idea to avoid dust from those areas.”

That could be a tall order.

The study area takes in all of Boulder City and a wide swath of the Eldorado Valley, with tendrils that reach to the shore of Lake Mead and into the oldest parts of Henderson.

“It’s not everywhere, but I think you’re going to have a hard time not finding it,” Buck said. “In every sample we looked at we found it. We found it pretty easily, too. I didn’t have to look very hard.”

For one test, Buck spent about three hours walking her horse along a dirt road in Boulder City. When she was done, she found asbestos fibers on her pants and her shoes.

“The last thing we want to do is upset people or cause a panic. But on the other side, we don’t want to give people assurances we can’t give,” said UNLV geologist Rodney Metcalf, who partnered with Buck on the study. “We can’t in good conscience say there’s no problem.”

The long, thin minerals were forged roughly 13 million years ago in the roots of volcanoes, also known as plutons. “Boulder City sits on top of one of these plutons,” Metcalf said.

The fibers have been weathering from the ground for the past 12 million years or so, giving them plenty of time to spread out, Buck said.

She specializes in something called medical geology, basically the study of the health impacts of minerals. She was in the midst of sampling arsenic in the dust blowing from Nellis Dunes when she came across a fibrous mineral in one of her samples. She later started talking to Metcalf about the asbestos-like fibers he was studying in northwestern Arizona, and the two decided to go looking for trouble in similar rock deposits in Southern Nevada.

What they mostly found was a mineral called actinolite, one of six types of asbestos regulated as a toxic substance by the U.S. Environmental Protection Agency.

Buck said she notified “several people” at the EPA about her discovery.

Asbestos fibers can’t be absorbed through the skin, but if inhaled or swallowed they can spawn a range of deadly diseases that might not develop for a decade or decades.

The real “pathway to humans” is in the air, Metcalf said. The fibers are too tiny to be seen with the naked eye and so light that they can stay aloft indefinitely once they’ve been stirred up by the wind or the tires on a vehicle.

Asbestos exposure is linked to mesothelioma, cancer of the lungs, larynx and ovaries, depressed immune function, and other disorders.

“There’s no known safe amount,” Buck said. “The good news is not everyone who is exposed gets sick.”

Buck, Metcalf and company plan to continue their research and expand their study area under a three-year grant from the Bureau of Land Management.

That work will include taking a closer look at other potential trouble spots in Clark County, most of it contained within the roughly 1,200 square miles of desert between U.S. Highway 95 and the Colorado River from Boulder City to the southern tip of the state.

Buck said the bureau wants to know more about where such deposits are and what kind of risks they pose. “They’re worried about their workers,” she said.

Meanwhile, researchers from the University of Hawaii are in the early stages of tests to determine how carcinogenic the fibers in Southern Nevada might be. They also plan to conduct a health assessment to see if any documented cases of mesothelioma, a rare cancer closely associated with asbestos, could be the result of “environmental exposure” in or around Boulder City, Buck said.

Metcalf said asbestos is actually a loaded term, with varying definitions used by doctors, geologists and environmental regulators. For example, he said, the fibers he has found in Mohave County, Ariz., do not meet the regulatory definition of asbestos. But that doesn’t mean they’re safe. In fact, they are similar to those found in Libby, Mont., where so much toxic soil was spread around by a nearby mine that the entire small town has been declared a Superfund site by the Environmental Protection Agency.

“You get this debate about is this asbestos or is it not,” Metcalf said. “It’s really not the issue. The issue is, is it toxic.”

Buck grew up in Montana and has cousins who got sick and died in Libby.

She said she started taking special precautions in the field after the first fibers were found around Boulder City. “As soon as I knew they were there, I sure as hell did. I wear a mask.”

The discovery also forced her to revamp her lab at UNLV to make it safer. “The whole point is don’t let it get into the air. You can’t just drag it in and expose everyone to it.”

For the same reason, Buck has decided not to take college students into the field with her to help collect samples as she normally would. She doesn’t want to expose them to something with the potential to shorten their lives. “They’re just so young.”