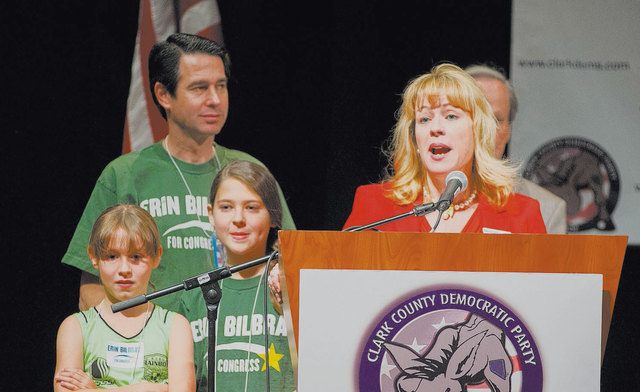 Nevada congressional candidate Erin Bilbray was against the Iraq war before she was for it.

That’s what Republican critics said on Monday, offering videos of Bilbray from 2007 and last month.

In the June 14, 2007, video report from KLAS TV-8, Bilbray is taking part in an anti-Iraq war protest in front of the Lloyd George Federal Building in downtown Las Vegas. At the time, then-President George. W. Bush had ordered a “surge” in U.S. troops in Iraq, sending another 20,000 soldiers into the war zone. And Democrats opposed Bush’s actions, including leaders such as U.S. Sen. Harry Reid, the Democratic Senate majority leader.

Bilbray, too, opposed the increase in troops and, speaking for a liberal group called Americans United for Change, argued for pulling the U.S. out of Iraq and ending the war.

“Throughout the summer you’ll see different groups I’m getting together to speak out, to say it’s time to bring our troops home and spend more money on domestic issues like school,” Bilbray said in the video, which can be seen here.

“You know. I’m a mother,” Bilbray said. “I would like to say we don’t need to be a strong force globally. I’d love to say that we live in that type of world, but we don’t. We have to have a strong military and we have to have bases across the country. When it comes to war, we need to be very cautious. But I do believe that if I were sitting in Congress at the time I would have voted for the war.”

The video can be seen here.

The Congressional Leadership Fund Super PAC, which works to elect Republicans to the House, provided the videos and said they show Bilbray flip-flopping on an important issue.

“Only a career political operative like Erin Bilbray would try to get away with changing her story when she’s already on tape leading liberal protests against our troops in Iraq,” said Emily Davis, spokeswoman for the PAC. “It’s clear Nevadans can’t afford Erin Bilbray in Congress when she can’t even tell the heroes from the villains, much less keep her own positions straight.”

Bilbray’s campaign manager, Erica Prosser, however, said the situation when the war began after 9/11 was much different than when many Americans became disillusioned with the Iraq war and wanted troops to come home.

“The vast majority voted to go to war because of the intelligence given,” Prosser said. “But it was flawed. Once that came out, she would have wanted to bring (the troops) home. I don’t see a contradiction.”

Bilbray is running for the 3rd Congressional District in Southern Nevada, a seat now held by U.S. Rep. Joe Heck, R-Nev., who is a doctor and Army reserve officer who was deployed to Iraq in 2008.