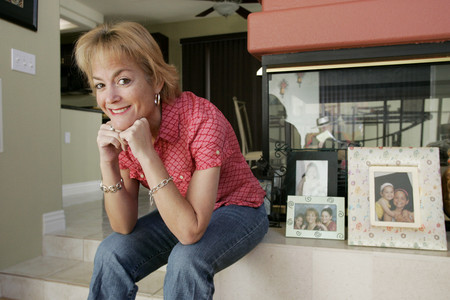 At times, following her diagnosis last month, 39-year-old Caryn Goldsmith thought she could feel it growing.

Your mind, she said, plays tricks on you after you’ve been told you have breast cancer.

One thing, above all, became critically important: “To get that horrible thing growing inside me cut out.”

So even though she awoke on Oct. 20 with a bad cough and the aches and pains of the flu on the morning of her scheduled surgery at Sunrise Hospital and Medical Center, she still planned on going through with the lumpectomy.

She had another mammogram at the hospital. A guide wire was put in her breast to help her surgeon, Dr. Lawrence Gardner, find the precise spot of the tumor. She changed into the hospital gown and also put on the stockings that help prevent blood clotting.

And then a nurse took her temperature — 102. High. Very high.

When Gardner was called by the nurse to his patient’s bedside, he took one look at her and canceled the procedure.

It was the third time, he told the Review-Journal, that he’s recently had to cancel a surgery because of H1N1, or swine flu.

The medical ramifications of H1N1 — already well documented in deaths — continue to reach into communities in ways little known to the general public.

At Valley Hospital, a pregnant woman diagnosed with H1N1 gave birth to twin girls on Sept. 30, about 21/2 months before her due date.

“We cannot be certain that having H1N1 induced the patient’s labor,” Valley Hospital spokeswoman Gretchen Papaz said. “However, it could be a factor.”

The virus so weakened the mother that she remains hospitalized and will probably have to spend time in a rehabilitation facility to strengthen her legs, Papaz said.

The twins, though unaffected directly by the flu, remain in the hospital’s neonatal unit.

Dr. Echezona Ezeanolue, an assistant professor of pediatrics in the University of Nevada School of Medicine as well as an infectious disease specialist, said other pregnant women in the Las Vegas Valley also have had to overcome the H1N1 virus.

“So far their deliveries have been OK,” he said. “We have been very fortunate. As you know, pregnancy reduces immunity.”

Ezeanolue also said many nonemergency surgeries have been canceled during the H1N1 flu season.

“The cancellations are not something that is happening at any one hospital more than another,” he said.

Before her scheduled surgery, Goldsmith had offered to sign a waiver absolving the doctor and hospital of all responsibility should complications arise, but Gardner held firm.

“There’s a huge risk of infection. Your immune system is already compromised. It’s too dangerous,” Goldsmith remembered her physician telling her.

“When you get the flu of any kind, chances are you have significant respiratory problems,” Gardner said. “When you put general anesthesia on top of that, you’re just asking for problems. It could lead to pneumonia.”

Goldsmith, who sells coupon books to schools for a living, said she took the antiviral medication Tamiflu to fight H1N1. It turns out she caught the virus from her 6-year-old niece while on a family trip to Disneyland.

It was while lying in bed, Goldsmith said, that she discovered the lump in her breast in September.

Often at night, she said, her mind has “taken her to dark places where I’d rather not go.”

“That’s why I didn’t want to postpone a surgery that Dr. Gardner described as life-saving,” she said.

As she struggles to stay positive, Goldsmith’s twin sister, Stacy Hakes, remains a cheerleader, going to every medical appointment with her.

The two are uncommonly close. When Goldsmith had gall bladder surgery a couple years ago, her twin had to have one a short time later.

“We are so much alike sometimes it can be scary,” Hakes said.

Goldsmith recovered from the H1N1 virus and on Nov. 5 she got the “horrible thing” cut out of her. Now she faces chemotherapy and radiation.

Gardner said the two-week delay in the surgery shouldn’t affect her condition.

“I have a feeling that I have a swine flu story that’s quite a bit different than what people normally hear,” Goldsmith said.