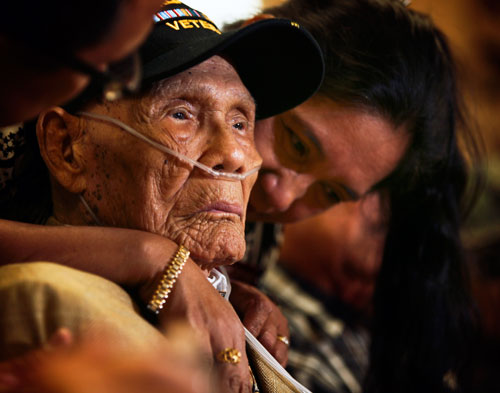 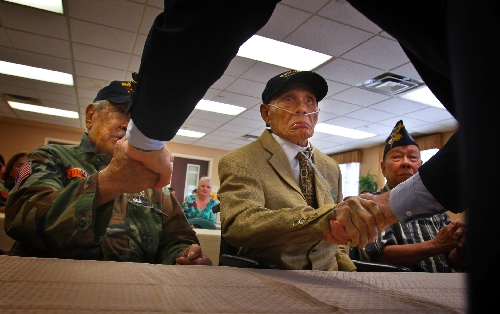 Filipino-American veterans got a glimmer of hope that they will finally be compensated for their World War II service after Rep. Joe Heck said Monday he has introduced a bill to compel the Department of Veterans Affairs to accept certain proof-of-service papers.

"They’re not spring chickens any more," Heck, R-Nev., told a gathering at a Las Vegas health care facility where six veterans from the local Filipino community sat in the front row. They were in their late teens or 20s when they volunteered to fight with U.S. soldiers nearly 70 years ago.

One, Silverio S. Cuaresma of Las Vegas, was a 30-year-old second lieutenant, according to an April 22, 1943, roster for the Pangasinan-Tarlac Military District that lists him as the No. 7 officer among 85 soldiers, an intelligence officer who led guerrilla raids against Japanese forces in Luzon.

Heck’s announcement stirred the 100-year-old Cuaresma, who said the bill gives him hope, but he still has doubts that the compensation won’t be delayed by red tape again. "It must be done right away," Cuaresma said.

Heck said, "Some of the people who make decisions say if we wait long enough, we won’t have to pay. That’s not right. So we’re going to try to make sure we get them what they’re due while they’re still around to enjoy it."

Like more than 24,000 others, Cuaresma’s claim was denied because the VA’s Manila office and the National Personnel Records Center in St. Louis don’t recognize guerrilla rosters and other Filipino military papers they submitted for their claims. Unlike Cuaresma, many missed the Feb. 16, 2010, filing deadline. Some were denied because their file lacked a single document.

Heck’s bill, introduced Friday, directs the secretary of Veterans Affairs to accept the foreign documents and directs the VA secretary to accept one valid document, rather than requiring multiple proofs.

That would allow U.S. citizens a one-time, $15,000 benefit as promised under the American Recovery and Re-investment Act of 2009. Those living in the Philippines could receive $9,000.

"The money is just sitting there. These men deserve it. They’ve earned it, and we’ve got to get it to them," Heck said, noting that there is $40 million in the Filipino Veterans Equity Compensation Fund.

The bill also extends the period that eligible veterans can apply for compensation and mandates that the secretary of the Army cooperate with the VA in determining their proof of service.

Heck’s bill is more narrowly tailored than a similar one that Sen. Dean Heller, R-Nev., introduced in the Senate on Sept. 12. Heller’s bill, the Filipino Veterans Act, would require that the Defense Department use historians to help document the Filipino soldiers’ service.

Heck said he hopes the House will pass his bill as soon as possible.

"I try to remind everybody that time is of the essence," he said.