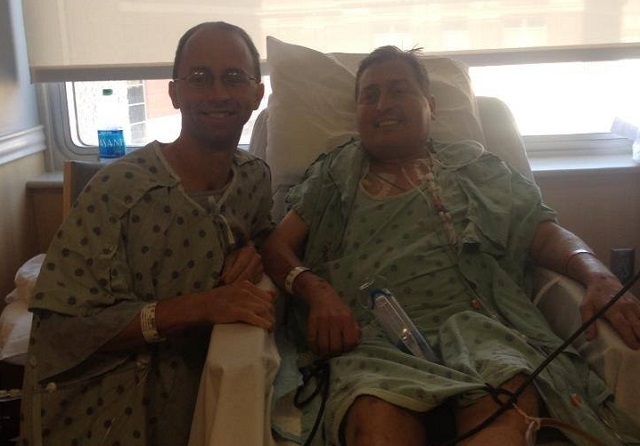 Charlie Bockelman, left, and Mitch Petty, right, after Bockelman donated a kidney to Petty. Bockelman found out about Petty's need for a kidney through Facebook. (A Kidney for Mitch/Facebook)

EVANSVILLE, Ind. — A stranger’s willingness to give up his kidney has given a local man hope for the future and forged a bond between their families

It was a bad case of pneumonia that killed Mitch Petty’s kidneys last Christmas.

The illness overcame him quickly, and as weeks in the hospital’s intensive care unit turned into months, his wife and three young children worried he would not survive, the Evansville Courier & Press reports.

The relief the family felt as Petty began to recover was tempered, though, because while Petty had survived, his kidneys had not.

Doctors at Indiana University Medical Center told the Pettys that it could be years before a deceased donor kidney became available. That meant years of dialysis, feeling weak and hoping to stay healthy enough for surgery.

On dialysis “you just don’t have as much energy,” Petty said. “You just feel like you’ve shoveled a driveway. You don’t want to go help your son shoot baskets. You can’t always go to his games.”

It’s been almost exactly a year since Mitch Petty received the news, but it might as well have been a lifetime.

Within months of beginning dialysis, a relative stranger gave Petty a kidney.

Petty recalls everything about the day he received the news that Charlie Bockelman, his wife’s co-worker, had offered to give up his kidney.

The couple dropped everything and drove to Bockelman’s house to meet Charlie and his wife and kids.

“I just sat in their living room and cried. I love these kids so much,” Petty said, motioning toward his children’s bedrooms. “I just told his kids, ‘Your dad is a hero.’”

Bockelman said he remembers that moment well, though he wasn’t giving up his kidney for the praise.

A few days earlier, he had seen Facebook page his co-worker Meredith Petty had made called “A Kidney for Mitch” and immediately had gotten tested.

“There wasn’t any deep thoughts or long talks about it,” Bockelman said. “I just felt it was something I was going to do. Mitch, he’s a young father like I am, and I think that is what drove me to do it.”

They had the transplant surgery in record time, Petty said. And both men recovered quickly.

“I’m so grateful, so thankful,” Mitch Petty said. “I’ll never be able to repay him.

“Sitting up in a chair at home was the goal last Christmas. I couldn’t even buy (my wife) a gift. I don’t even know what percentage it could be better this year. I already got the best present: my life back.”

Petty says he feels especially grateful because at any given time tens of thousands of Americans are waiting for new kidneys. Some sources put the number at 85,000, others say it is closer to 95,000 people on waiting lists.

The IU Medical Center encourages patients to be proactive in seeking out a living person to donate a kidney. Living donor transplants have a higher success rate and tend to last longer. If a patient has no immediate family members or friends who can donate, they are encouraged to find a stranger, Meredith Petty said.

“She got the kidney for me,” Mitch Petty said, his eyes filled with tears as he looked at his wife across the room. “I wouldn’t have put it on Facebook. I would have sat here for five years like an idiot.”

But Meredith Petty is not the first person to seek out a kidney online. There are several websites and online forums devoted to connecting people in need of a kidney with people willing to share one. A few are in the Evansville area. The Facebook page, “A Kidney for Aaron By Team Aaron,” was created in 2011 to find a living donor kidney for 24-year-old Aaron Lutz from Newburgh. Several other people in the area responded to a Courier & Press Facebook post that they also are in search of a new kidney.

Kidneys can fail in adults and children alike for a number of reasons. In Mitch Petty’s case, it was the pneumonia, brought on by an adult onset autoimmune disease called Common Variable Immune Deficiency.

His new kidney does not cure that disease, but it does give Petty even more of an incentive to stay healthy despite it.

The Petty family plans to begin traveling again next year, and Mitch Petty intends to again become involved in his children’s sports and activities. His daughter is eager for him to swim with her again.

“They can take the Mega Millions,” Mitch Petty said. “I’ve got the best gift.”