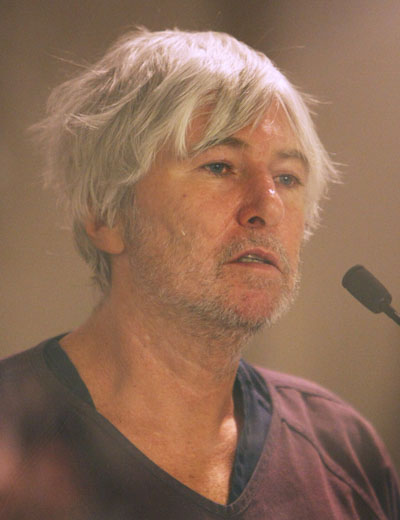 That’s what Randolph told authorities. Police, however, didn’t believe him.

On Thursday, police arrested Randolph in Utah in connection with both slayings. Authorities believe Randolph hired a hitman to kill his wife and then killed him after the work was done. Randolph, authorities said, wanted his wife dead to collect more than $400,000 in insurance.

Authorities had their doubts in part because of Randolph’s past.

About two decades ago, a jury acquitted him of murder for the death of his previous wife, Becky Randolph. She was found dead from a single gunshot wound to the head and Randolph collected $250,000 in insurance pay-outs after her death, news reports state.

Randolph has been married six times. Four of his wives are now dead, authorities said.

Authorities said one of the wives died after an illness while another died after surgery.

A Clark County grand jury this week indicted Randolph on charges that he orchestrated his wife Sharon Clausse Randolph’s slaying and then shot the man he plotted with, Michael James Miller.

Randolph, 53, is currently detained at the Davis County jail in Utah pending extradition to Nevada. He is charged with two counts of murder with a deadly weapon, conspiracy to commit murder and burglary while in possession of a deadly weapon.

“We went through this before and it was pure hell,” she said from her home in Clearfield, Utah. Las Vegas and local police arrested Thomas Randolph at her home.

She said her son has been unemployed and on disability because of problems with his back. He also suffers from hepatitis C, she said.

Dorothy Randolph said the couple didn’t have the “best marriage” partly because they were both very independent. But she refused to believe that her son was involved in Sharon Clausse Randolph’s slaying.

“I don’t believe one thing about this,” she said. “He’s not that kind of person.”

Thomas Randolph married Sharon Clausse Randolph in 2006 in Mexico. They renewed their vows in Las Vegas in 2007.

Sharon Randolph, 57, was born in New York but lived in Nevada for 31 years. She was a retired cosmetologist and Randolph was her third husband.

Authorities said Randolph met his accomplice and victim Miller, 38, about a year ago in front of a convenience store. The two struck up a relationship and Randolph hired Miller as a handyman to work on his home.

During that time, Randolph was likely grooming Miller to kill his wife, authorities said.

He said Randolph’s mannerisms and evidence at the scene made police suspicious. A source with knowledge of the investigation said there was about a 10-minute lapse between the time of the shooting and when Randolph called 911. The source said Randolph may have been setting up the scene during this time.

In 1986, Randolph’s then-wife Becky Randolph was found dead in Clearfield, Utah. Prosecutors said Thomas Randolph had killed her and staged the slaying to look like a suicide, according to 1980s news reports published in the Deseret News.

His defense attorney at the time said Randolph’s wife committed suicide and had suffered from a cocaine addiction. The attorney, John Caine, told the jury that Becky also tried to kill herself previously, the Deseret News reported.

Randolph went to trial in the case. Prosecutors at the time said Randolph and a friend, Eric Tarantino, plotted to kill Becky Randolph and make it look like an accident. They came up with several schemes, including making it look like she fell into her bathtub or staging a hunting accident, the Deseret News reported.

When Randolph was acquitted, the Deseret News reported that he was still being held on a felony charge of conspiracy to commit murder. He was accused of conspiring with a fellow inmate to kill Tarantino, who was the prosecution’s prime witness against him in the murder case.

Former Davis County Attorney Mel Wilson, who prosecuted the case, said Randolph later pleaded guilty to a lesser felony and went to prison for a couple of years, although the defendant eventually succeeded in getting Utah authorities to expunge his criminal record.

Wilson said Randolph went to work as an investigator for Caine after his release from prison. Caine died in 2007.

Wilson rejoiced Thursday upon learning that authorities had arrested Randolph.

Now a private attorney in Bountiful, Utah, Wilson said two Las Vegas police detectives met with him a couple of months ago to discuss Randolph. They did not know at the time whether Randolph would be charged in connection with the Las Vegas killings.

“After speaking with the detectives in Las Vegas, I was hopeful that they would file charges, and I wish them every success in being able to convict Mr. Randolph, because I wasn’t able to,” he said.

Wilson’s failed prosecution of Randolph in the 1986 killing of Becky Randolph, the suspect’s wife at the time, has troubled the lawyer for nearly two decades.

Wilson had prosecuted cases for about 10 years in Davis County before being elected county attorney, a position he held for two decades. He said he prosecuted Thomas Randolph a couple of years after taking office.

The case had no confession and no eyewitnesses, Wilson recalled.

A constitutional ban on double jeopardy meant Wilson would never get a second chance to prosecute him for that crime.

“It’s one of the few cases that I wish I had had the ability to try over again,” Wilson said.