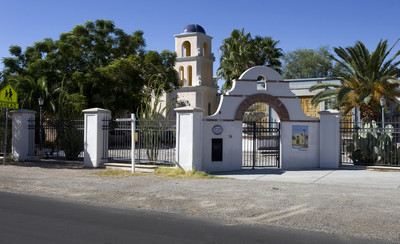 Michael Jackson‘s decision to live near a Las Vegas elementary school has upset some parents.

The former King of Pop, who moved back to Las Vegas late last year with his three children, is living on Palomino Lane, down the street from Wasden Elementary School.

A concerned mother sent several e-mails last week, saying, “Of all the residences he could have purchased … why one across from an elementary school? I understand he was never convicted of anything … and can live wherever he wants. …”

I’m told Wasden’s principal has a view of Jackson’s home from her office.

He may not be staying long. According to the buzz in the real estate community, he’s in escrow involving another property.

Jackson moved into the neighborhood recently after staying in a Palms suite for several months.

Word got out about his Palomino Lane residence, and Jackson’s fans have been gathering at the entrance. British fans serenaded him on his birthday, Aug. 29, and his security detail sent pizzas to the group.

Palms owner George Maloof played promoter, going back and forth between the two. “I said, ‘Why don’t you guys work out a deal right here?'”

Mayweather was emphatic, said Maloof, that he’d come out of retirement if he can beat Manny Pacquiao in December. THE OTHER VERSION

A process server’s version of how he tracked down Las Vegas food and beverage blogger Michael Politz differs from Politz’s account.

Politz, who was accused of libel and was sued last month by Privé Las Vegas nightclub at Planet Hollywood, said in an e-mail to me that he agreed to meet Yepko on Tuesday outside Lavo, the new nightclub at Palazzo, where Politz was hosting a party.

Yepko said Politz didn’t return numerous calls made to him over a 13-day period or respond to visits to his office.

Yepko said he had been tipped that Politz would be at Lavo and, after spotting someone who resembled him outside the club, called Politz’s cell phone number from 15 feet away and served him when he answered the phone.

Politz said, “You got me. I know who you are,” according to Yepko, a licensed process server and private eye.

Politz has posted critical items about Privé on TheVegasEye.com, an Internet newsletter he operates.

Chantelle Berry and Christina Moore of the new “90210,” co-hosting at Jet (Mirage) on Friday. Partying with them was Ken Davitian, best known for his role in the film, “Borat.” Word is he’ll be joining the cast of 90210. Also there: Prinz, keyboardist from the Black Eyed Peas, celebrating his birthday. … NFL Hall of Famer Franco Harris, having brunch Saturday at Vinter Grill. Fran Drescher of “The Nanny” is hosting a fundraiser today at Vinter to benefit her Cancer Schmancer fund and other cancer charities. … At “O” (Bellagio) on Friday: actor-comedian Chris Tucker, Amber Heard of “Pineapple Express” and Alexis Bledel of “Gilmore Girls” and “Sisterhood of the Traveling Pants.”

“Beats my old gig as a hockey mom.” — Al Pacino, From David Letterman‘s “Top Ten Reasons I Like Being An Actor presented by Robert De Niro & Al Pacino”