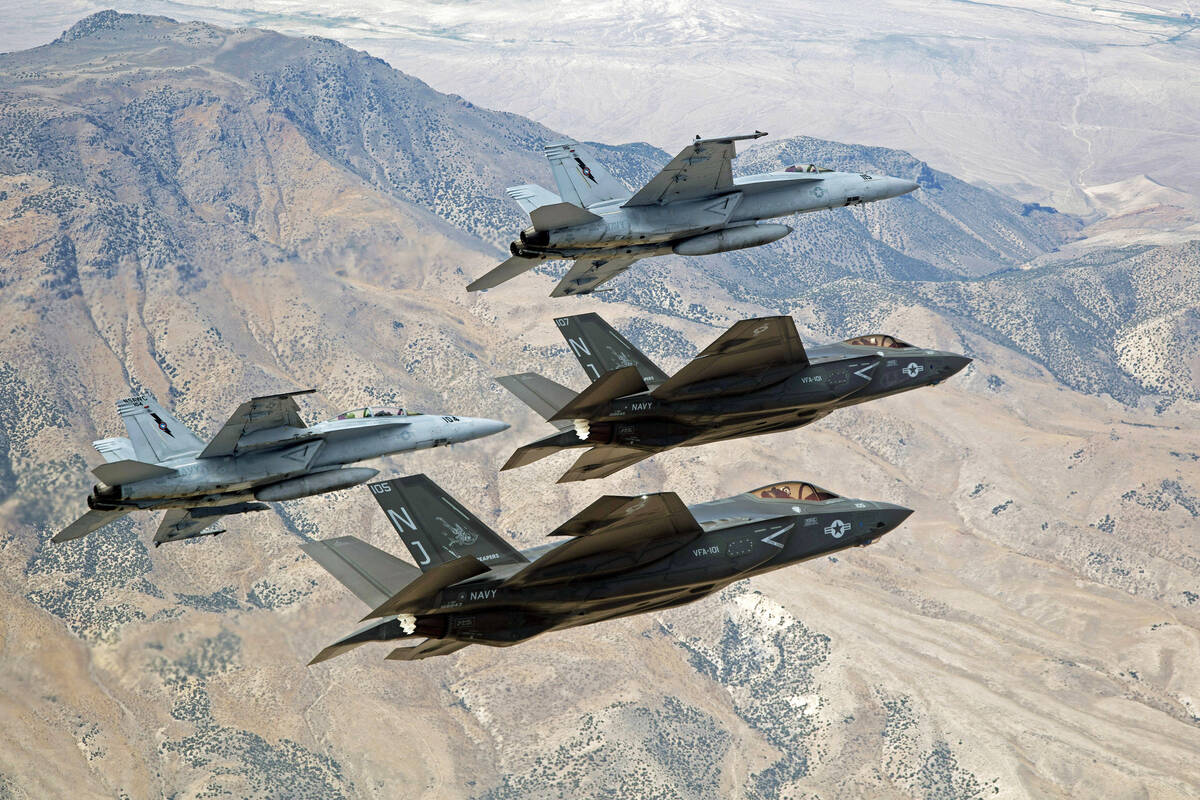 The U.S. Senate approved the proposed expansion of the U.S. Navy’s Fallon Range Training Complex Thursday, and the bill is headed to President Joe Biden’s desk for a signature.

The deal, which the House approved last week, is part of the annual defense spending bill and includes compromises on behalf of the Navy, Native American tribes in the area, Churchill County and conservationists.

The agreement designates an additional 558,535 acres to expand the Fallon Range Training Complex, most of which will be buffer zones. The base, located about 65 miles east of Reno, comprises 12,256 nautical miles of airspace and 232,000 acres of land and is home to the Navy’s fighter weapons school, known as “Top Gun.”

Fallon serves as the Navy’s premier tactical air warfare training center and includes four bombing ranges, an electronic warfare range and the longest runway in naval aviation at 14,000 feet. The expansion will allow for its carrier air wings and Navy special warfare teams to train “in a more realistic environment and better prepare for strategic competition,” Secretary of the Navy Carlos Del Toro said in a statement.

Two Native American tribes in the area will also receive land as well as money. The Walker River Paiute Tribe, located in Schurz, will receive 8,000 acres in trust land and $20 million in recognition of contamination after bombing materials fell on the tribe’s lands inadvertently from the military base.

The Fallon Paiute Shoshone Tribe will receive 10,000 acres in trust land and $20 million to build a cultural center to showcase the tribe’s culture, language and history.

More than 573,000 acres will be protected for conservation and wilderness. Three new wilderness areas included in the agreement are the Clan Alpine, Cain and Desatoya mountains. The wilderness area consists of rugged and mountainous terrain with huge rock formations, spires and hoodoos. Wildlife that call the place home include mountain lions, mule deer, gray foxes, sage grouse and red-tailed hawks, according to nevadawilderness.org.

Plans to expand the military base have been a long time in the making. For about five years the Navy has sought to expand but was met with resistance by the local tribes who have lived on the land for thousands of years and sought to protect the land, as well as conservationists looking to preserve nature and wildlife.

“While our tribe will never support the expansion of (Naval Air Station Fallon) taking more of our ancestral lands,” said Cathy Williams-Tuni, the chairwoman of the Fallon Paiute-Shoshone tribe told the Associated Press, “we’re still very thankful and grateful of the many benefits that the (National Defense Authorization Act) for our tribe has, and how it’s going to affect our tribe and other tribes.”

Sen. Catherine Cortez Masto, D-Nev., worked with Rep. Mark Amodei, R-Nev., and Sen. Jacky Rosen, D-Nev., to negotiate with the different parties involved and reach a compromise. The Navy’s original proposal did not include provisions to support local tribal nations and the nearby communities.

“The responsible expansion of the Navy’s Fallon Range Training Complex that I negotiated will improve our national security, fuel economic growth in Churchill County, and preserve important cultural heritage sites for Tribal nations,” Cortez Masto said in a statement.

Amber Torres, chair of the Walker River Paiute Tribe, said the legislation resolves an historic injustice against the tribe.

“We can now begin the healing process, with restored sacred lands, expansion of our tribal homeland, just compensation and the opportunity for new economic development for the benefit of our people,” Torres said in a statement.

Some conservationists, however, are not happy with the “compromise.”

Patrick Donnelly with the Center for Biological Diversity, said the deal is not a compromise, but rather a “ransom note.”

“We support conserving public land for their own sake,” Donnelly said. While 575,000 acres of land will be protected, large unbroken tracks of wildlife in central Nevada will still be split. The increased flying overhead could impact the Stillwater National Wildlife Refuge, which hundreds of thousands birds fly through every year as part of their migratory path south.