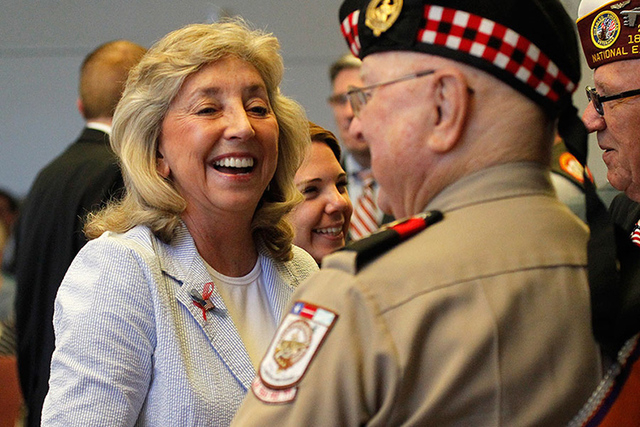 Rep. Dina Titus, D-Nev., talks with veterans before the Memorial Day ceremony at the Southern Nevada Veterans Memorial Cemetery in Boulder City on May 26, 2014. Titus and two other congressmen have proposed a bill to create 2,000 residency programs at VA facilities to curb a shortage of doctors. (Justin Yurkanin/Las Vegas Review-Journal, file) 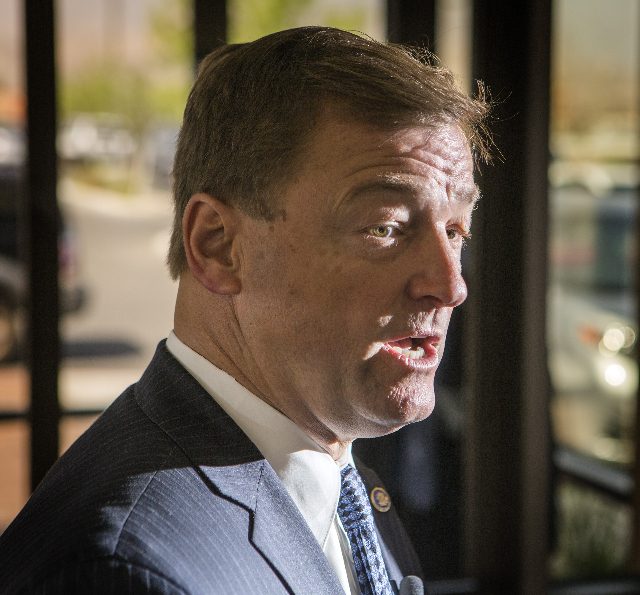 WASHINGTON — The next head of the Veterans Benefits Administration must ensure that veterans do not face long delays in receiving the benefits they have earned, say Sen. Dean Heller and Rep. Dina Titus.

The two Nevada lawmakers are hoping that President Barack Obama quickly selects a competent replacement for Allison Hickey, who on Friday quit her job as head of the administration that oversees delivery of benefits to more than 12 million veterans and their families. She no longer works for the VA.

Hickey had faced heavy criticism from some veterans groups and lawmakers on Capitol Hill over the agency’s management failures. She was also scheduled to appear this week at a congressional hearing over a recent Inspector General report that found the agency had misused a taxpayer-funded employee relocation program to circumvent a prohibition on bonuses and pay hikes for some executives.

“The VA needs to move quickly to hire the most qualified person possible so we can address the growing appeals backlog,” said Titus, D, who serves on the House Committee on Veterans’ Affairs.

Although Titus has been critical of VA operations, she noted that Hickey had always been responsive to her concerns about the treatment of veterans by her agency’s office in Reno.

Heller, a member of the Senate Veterans’ Affairs Committee and co-chairman of the VA Backlog Working Group, had no kind words for Hickey as she departs benefits agency.

“Nevada’s veterans have one of the longest waits in the nation for disability claims and this is unacceptable,” said Heller, a Republican. “The recent IG report about certain VBA employees abusing their authority is a disservice not just to veterans and VA employees, but to the American public as well.”

Heller said VA Secretary Robert McDonald has to “live up to his commitment” to restore integrity and excellence to the agency.

“Veterans and the American public are tired of the bureaucracy and incompetence emanating from the VA,” Heller said. “I expect any nominee to bring renewed leadership and commitment to VA’s values as it carries out the mission of ensuring veterans receive their benefits in a timely manner.”

Heller and Sen. Robert Casey, D-Pa., formed the VA claims working group in 2013 in response to the backlog.

House Veterans Affairs Chairman Jeff Miller, R-Fla., who had called the hearing on the IG Report, said in a statement that Hickey “was not cut out for the job.”

“VBA needs a leader who will put veterans — not VA bureaucrats first — while working to end the backlog without sacrificing quality, accuracy or service to veterans. Unfortunately, Hickey was not that type of leader,” he said.

In March 2013, Miller had called for her resignation as the number of backlogged disability claims from veterans ballooned to more than 600,000. The disability benefits backlog has fallen since then to just under 74,000 cases.