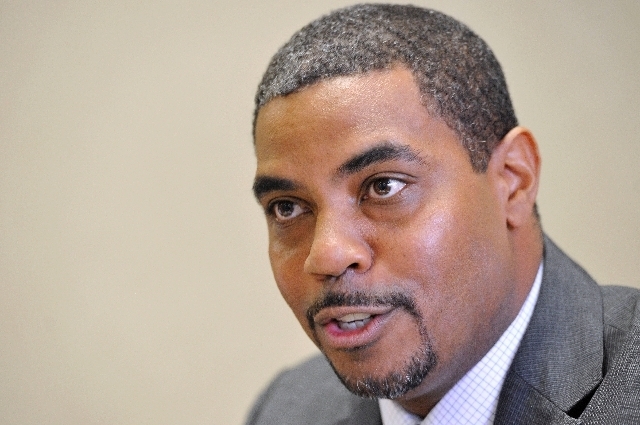 The new Veterans Affairs Hospital in North Las Vegas is adding 20 staffers to work on a growing backlog of benefit claims, U.S. Rep. Steven Horsford revealed Wednesday as he met with veterans advising him on the systemic problems with the VA in Nevada, including months-long waiting lists to see doctors and get other health care.

Horsford, D-Nev., said he’s gathering information to prepare for a June 17 meeting he and U.S. Sen. Harry Reid, D-Nev., have scheduled with Veterans Affairs Assistant Secretary Joan Mooney. He set up the meeting before an investigation showed a Phoenix office was keeping a secret list of hundreds of patients overdue for appointments.

As a result, President Barack Obama last week accepted the resignation of VA Secretary Gen. Eric Shinseki. One of his last acts was to kill bonuses for VA supervisors for cutting wait times because some were cooking the books. The government is now investigating more than 40 VA centers nationwide.

Horsford said no evidence of wrongdoing has yet been uncovered in VA offices in Nevada, although veterans are having problems getting timely appointments and receiving benefits because of red tape and bureaucracy.

Also, the VA hasn’t opened a promised clinic in Pahrump approved two years ago. Horsford said he plans to bring up the Pahrump delay at the June 17 meeting.

“We’re trying to get specific answers to specific issues,” Horsford said. “Out of a bad situation there is an opportunity for us to really fix what has been … a problem for a very long time. This is an opportunity for all of us to come together and keep our promise (to veterans) that you will be taken care of.”

Horsford’s comments came after a half-hour meeting with a half-dozen members of his Veterans Advisory Council, a group he established to get on-the-ground information about VA issues. Nevada has about 300,000 veterans, many having worked at Nellis or Creech Air Force Bases.

Retired Army Sgt. Dixie Thompson, a member of the advisory council, told Horsford about a disabled Vietnam veteran who suffered debilitating glaucoma in both eyes. The VA kept putting off surgery, telling him in January for the second time he would have to wait another six to nine months. The veteran took out a personal loan to pay for it himself after a fall, Thompson said.

Thompson herself recently went to the emergency room after having a heart episode, she said. Doctors told her to see her VA physician as soon as possible. After her primary care doctor failed to return her calls she decided to wait until her annual checkup, which also was delayed.

“I never even got a response,” Thompson said in an interview. “I said ‘the heck with it, I’ll wait until July.’”

Vita Lopez, senior vice commander and service officer at the Veterans of Foreign Wars Post 1753, told Horsford that in September she tried to make an appointment with a VA women’s wellness center and she was given a March date. Lopez blamed outdated computer systems and employees who don’t care about being efficient.

“They’re hanging onto the old ways,” Lopez said, noting the VA is not equipped to handle 21st century health care.

Dan Kaminski, of the Paralyzed Veterans of America, said the VA takes six to eight weeks to replace a broken wheelchair compared to same-day replacement in the private sector.

Horsford agreed, saying he hears from workers who feel “overstretched” at work. Now, for example, the VA hospital has only 3 staffers working on benefit claims. The 20 new workers are being trained and should be on duty by July, he said.

“We need a surge of resources that are going into the VA,” Horsford said, comparing it to a surge of troops at war.

Horsford said the VA plans to give veterans vouchers for private health care if they have been waiting a long time and need immediate care.

The congressman said he voted for the VA Accountability Act that passed the House in May. The bill makes it easier for the VA secretary to fire or demote employees guilty of negligence or mismanagement. The U.S. Senate has yet to act on the measure.

Horsford said last week he saw for himself how slow VA health care can be. In a surprise visit to the VA hospital, Horsford said he talked to two patients who had been waiting for about an hour for a CAT scan. The wait was attributed to a shortage of staff as two of five positions in the department were vacant.

“We have some very severe staffing shortages,” Horsford said. “The veterans I talked to say once we get in, we get great service. It’s just getting in that’s the problem.”