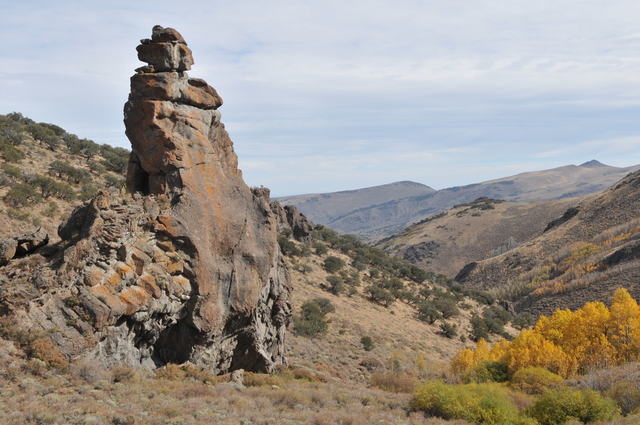 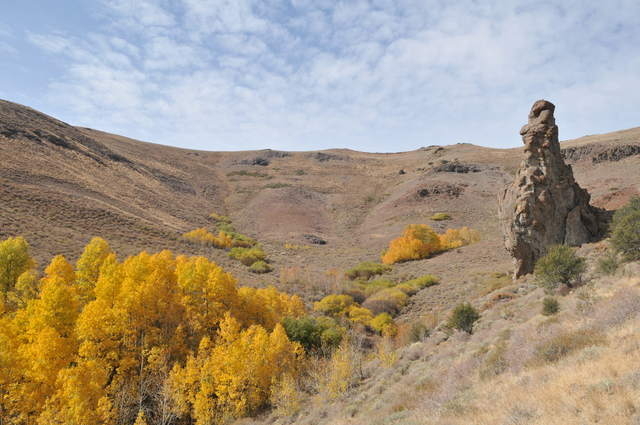 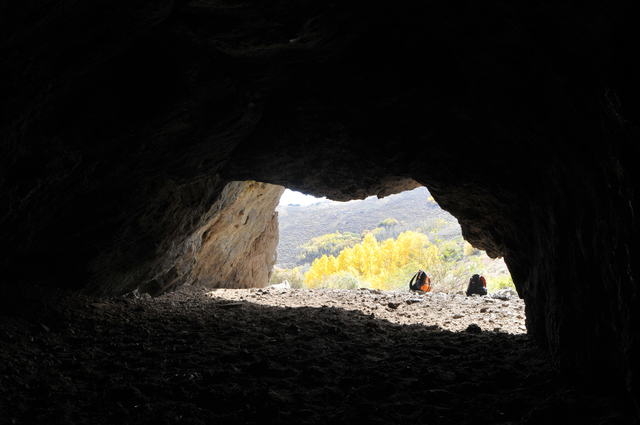 The cave where Pvt. James C. Reid rescued wounded soldiers during a skirmish with Paiute warriors on April 29, 1868 looks out over a valley in October 2015 near Hinkey Summit, 50 miles north of Winnemucca. (Sgt. Emerson Marcus/ Nevada National Guard) 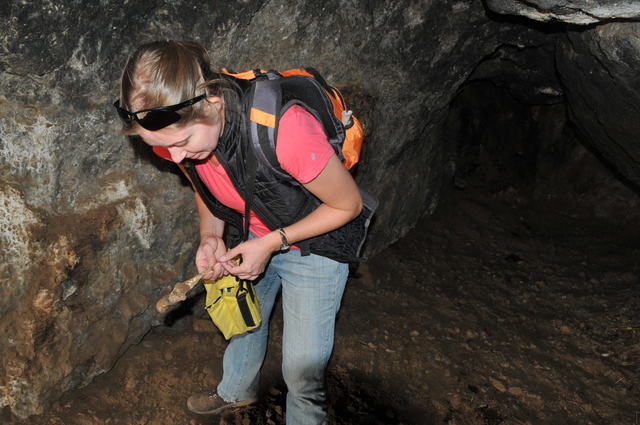 In 1868, four years after Nevada became a state, the Army Medal of Honor from the Civil War era was still being awarded to cavalry soldiers for gallantry in action.

One was supposed to go to a private from Camp Winfield Scott in Northern Nevada for rescuing comrades who had been wounded in a skirmish with Paiutes.

But the medal never caught up with Pvt. James C. Reid during his travels with Company A of the 8th U.S. Cavalry after his unit moved to a post in the Arizona Territory in 1869.

Not only that, the name of Reid, an Irish immigrant from San Francisco, was spelled “Reed” on the medal’s citation. And the place of his heroic actions on April 29, 1868, was mistakenly listed as Arizona Territory.

Instead, the clash occurred near Hinkey Summit, 50 miles north of Winnemucca in Humboldt County, according to a Nevada National Guard historian and a retired colonel who hiked to a cave there in October accompanied by an Air Force major and a Forest Service archaeologist.

They believe Reid fended off the attackers from inside the cave and cared for his wounded lieutenant and sergeant, and a private who died there.

“An oblong cave … surrounded on the side by high and perpendicular rocks affording a solitary entrance of not more than six feet in width” is described in a handwritten incident report by 8th Cavalry 1st Lt. Joseph W. Karge. It matches the steep, remote landscape near Hinkey Summit that has remained undeveloped, essentially frozen in time.

Another clue to solving the location mystery is that Company A was the only one in Nevada. Most of the dozen 8th Cavalry companies were in California and the Pacific Northwest.

“I cannot forebear to make special mention of the heroic behavior of Pvt. James C. Reid, who, being the only sound man in the party, stood nobly to his work in defending the lives of his disabled comrades,” Karge wrote in his report.

The incident was also described by the Humboldt County Register in a June 20, 1868, editorial.

So after 148 years, Nevada Guard officials are crafting a petition for the Army Human Resources Command to correct the location of where Reid’s search party was ambushed by 17 Paiutes it was pursuing on suspicion of stealing and killing a horse. A rancher and a scout who were with the party ran for help and later guided Karge to the scene.

If the command accepts the evidence and changes the citation, it will be the only Medal of Honor awarded for action in Nevada.

“This is important to Nevada because it is our nation’s highest medal for valor and this medal is the only one received for action in this state,” said Nevada Air National Guard Tech. Sgt. Emerson Marcus, a public affairs specialist who is leading the charge to correct the record.

“If nothing else, this brings to light the story of early Nevada history,” he emailed Tuesday.

NO DOUBT about evidence

Retired Nevada Army National Guard Col. Daniel Rathbun, who joined Marcus on the trek to Hinkey Summit, said there “is no doubt in anybody’s mind. Everybody seems to understand what happened and how it happened.”

“The paperwork had already been submitted, but the paperwork and (Reid) were going in different directions,” said Rathbun, 74, author of “Nevada Military Place Names of the Indian Wars and Civil War.”

Marcus said the Congressional Medal of Honor Society has reviewed the evidence and “is on our side.” But the society can’t correct the record, only the Army can.

The mistake occurred because Reid was “bouncing around” in the cavalry’s Western campaigns.

“Forty Medals of Honor were awarded at the same time, and they sent Reid’s to the wrong location,” Marcus said. There is no mention of the medal in Reid’s pension or service records from the 1880s, he added.

“My personal opinion is they (cavalry commanders) didn’t try to push the issue further. He went back to Oregon, where he had enlisted, and they never got the medal to him. They sent it to Arizona,” he said.

“Reid died a broken man,” he said. His date of death is unknown, but he was hospitalized in 1882 for alcoholism and rheumatism and, at age 52, applied for admission to the Soldiers Home in Washington, D.C.

Citing Army statistics, Marcus said the majority of the nation’s Medals of Honor were awarded during the Civil War and Indian Wars, approximately 1,940 out of about 3,460.

“My point is the Medal of Honor wasn’t what it is today. They were giving them away, some for just re-enlisting,” he said.

It wasn’t until after World War I that the Medal of Honor held the place it does today. Legislation signed by President Abraham Lincoln on July 12, 1862, authorized 2,000 “medals of honor” for noncommissioned officers and privates for “their gallantry in action and other soldier-like qualities.”

“During World War I and afterward, they began striking some of the medals deemed illegitimate from the record,” Marcus said. But other valor medals were added such as the Silver and Bronze stars.

“The Medal of Honor was somewhat a catchall for military awards up until that point. But it’s important to note that Reid’s was not removed from the record,” he said.

Rathbun understands the controversy that comes with awarding medals to soldiers for battles against Native Americans.

“The moral high ground is still being fought over and probably never settled to everyone’s satisfaction,” he said about the Indian Wars.

“Regardless of which side your favor, history does record an ample supply of both brutality and compassion for each side,” Rathbun said. “To attempt to assign righteousness across the board to one side or the other is fruitless and argumentative at best.”

There are “countless examples of incredible courage by warriors, whether they wore buckskin or blue,” he said.

Inspiration comes from their stories as long as they are accurate. Reid, he said, “was a hero. The heroism he demonstrated in April 1868 was worthy of the award and the recognition that comes with it.