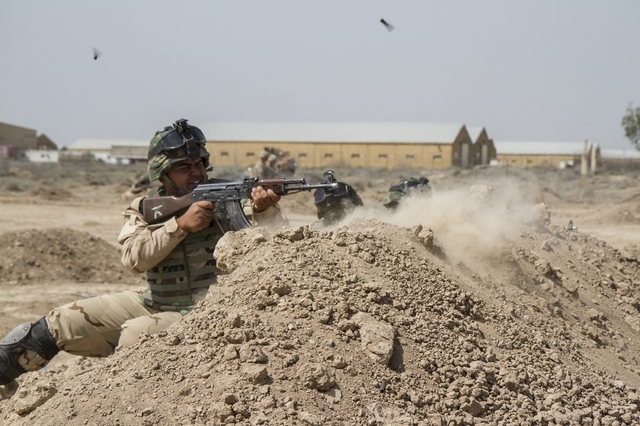 WASHINGTON — President Barack Obama on Wednesday ordered the deployment of up to 450 more U.S. troops and the establishment of a new training base in Iraq’s Anbar province to help rebuild fragile Iraqi forces in preparation for a battle to retake territory lost to Islamic State.

The plan to expand the 3,100-strong U.S. contingent of trainers and advisers in Iraq marks an adjustment in strategy for Obama, who has faced mounting pressure to do more to blunt the momentum of Islamic State insurgents.

But with Obama sticking to his refusal to send troops into combat or to the front lines, it is unlikely to silence critics who say the limited U.S. military role in the conflict is not enough to turn the tide of battle.

U.S. officials hope that a strengthened American presence on the ground in Anbar will help the Iraqi military devise and carry out a counter-attack to retake the provincial capital Ramadi, which insurgents seized last month in an onslaught that further exposed the shortcomings of the Iraqi army.

A major challenge for the U.S. troops, who will set up a training hub about 15 miles (25 km) from the Ramadi combat zone, will be outreach to Sunni tribal fighters, many of whom do not trust the Shi’ite-led government in Baghdad. U.S. officials want to integrate them into the Iraqi army and reduce its reliance on Shi’ite militias in the fight against Islamic State.

Obama decided on the new troop deployment in Iraq’s Sunni heartland in response to a request from Iraqi Prime Minister Haider al-Abadi, the White House said. The two leaders met while attending the G7 summit in Germany earlier this week.

“To improve the capabilities and effectiveness of partners on the ground, the president authorized the deployment of up to 450 additional U.S. military personnel to train, advise, and assist Iraqi Security Forces at Taqaddum military base in eastern Anbar province,” the White House said in a statement.

It made the announcement two days after Obama said the United States did not yet have a complete strategy for training Iraqi security forces to regain land lost to Islamic State fighters, who have seized a third of Iraq over the past year in a campaign marked by mass killings and beheadings.

The fall of Ramadi last month drew harsh U.S. criticism of the Iraqi military’s weak performance and Washington has begun to speed up supplies of weapons to the government forces and examine ways to improve the training program.

Seeking to speed up flow of trainees

U.S. forces have already conducted training at the al-Asad military base in western Anbar, and officials say the new training site will allow them to speed up the flow of trainees.

The U.S. military has already begun assessing the new training base. The Pentagon said the first of the new troops will arrive in Anbar within a few days from forces already in the country.

But Obama’s new plan stops short of some of the more assertive steps demanded by some of his conservative critics at home, such as putting U.S. spotters in forward positions to call in air strikes or embedding American advisers with Iraqi forces in combat.

U.S. House of Representatives Speaker John Boehner said earlier that Obama’s plan to send additional U.S. military personnel to train Iraqi forces was a “step in the right direction,” but not a sufficient strategy to defeat Islamic State.

“It’s clear that our training mission alone has not been enough,” the Republican lawmaker said.

With the latest adjustments, Obama is deviating only slightly from his policy of relying on a bombing campaign and local forces without committing large-scale U.S. troops. His options are hemmed in by a deep aversion to seeing America drawn back into Iraq after pulling out U.S. forces in 2011.

U.S. officials took pains to insist that Wednesday’s announcement did not amount to an overhaul of Obama’s anti-Islamic State strategy, but they left open the possibility of further unspecified steps.