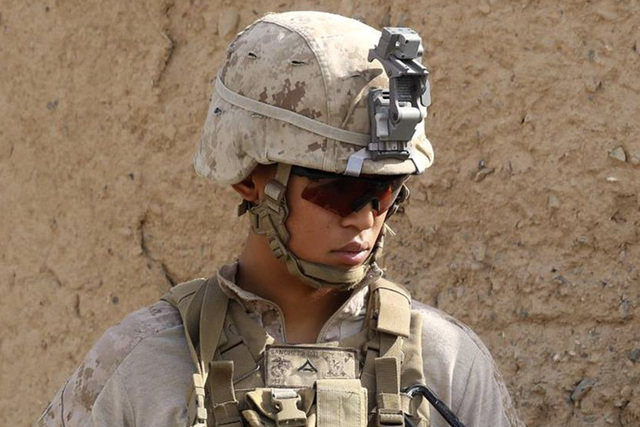 Corporal John Paul Sanchez, a rifleman with Bravo Company, 1st Battalion, 7th Marine Regiment, prepares to use a Biometric Enrollment and Screening Device during a mission in Helmand province, Afghanistan, June 5, 2014. Sanchez, a native of Las Vegas, and the company patrolled in nearby villages of Camp Leatherneck for three days to disrupt Taliban insurgents. (US Marine Corps) 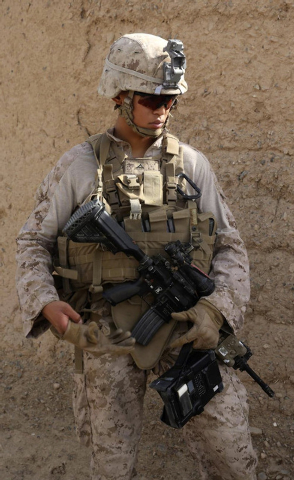 Corporal John Paul Sanchez, a rifleman with Bravo Company, 1st Battalion, 7th Marine Regiment, prepares to use a Biometric Enrollment and Screening Device during a mission in Helmand province, Afghanistan, June 5, 2014. Sanchez, a native of Las Vegas, and the company patrolled in nearby villages of Camp Leatherneck for three days to disrupt Taliban insurgents. (US Marine Corps)

After he graduated from a Las Vegas high school in 2010, John Paul Sanchez decided to join the Marines because he “wanted to be part of the effort and help out.”

At the time, the seven-year war in Iraq was winding down, while the war in Afghanistan, which began in 2001 in the aftermath of terrorist attacks on the World Trade Center and the Pentagon, was ramping up to its peak of 100,000 U.S. troops.

The latest figures from June by the International Security Assistance Force show the United States still is providing the bulk of the force from 48 nations, with 32,800 U.S. troops of the coalition’s 49,900 in Afghanistan.

In a telephone interview Tuesday from Camp Leatherneck, he said he is poised and proud to be among the last Marines involved in combat operations as the Obama administration’s draw-down enters the homestretch to reduce U.S. troop levels to below 10,000 by year’s end.

His goal: “To get me and my brothers home safely.”

In addition, he intends to return to his home in the northwest Las Vegas Valley with pride in the effort to promote and protect democracy in Afghanistan.

“I can’t speak for all Marines. As for myself, I think so,” he said when asked about having a sense of accomplishment.

“I got to work with the Afghans’ own army and feel we’ve done a good job preparing them,” said Sanchez, who graduated from College of Southern Nevada High School West.

On his first deployment in the spring of 2012, he had anticipated tougher times. He was well prepared for combat from training at the San Diego Marine Corps Recruit Depot and the Camp Pendleton School of Infantry.

“It wasn’t as bad as I thought it would be,” he said. “A lot of Marines in the unit with experience gave us insights. I felt I was well prepared.”

So when he deployed again in March, his first tour had given him the experience “to pass my knowledge on to junior Marines so they won’t find anything surprising.”

A big part of Sanchez’s job is to avoid unpleasant surprises by keeping track of who is moving in and out of villages and distinguishing the “bad guys” from the “good guys,” as he calls them.

To do this, he relies on biometrics, things such as fingerprints and retina scans, sort of like fingerprints for a person’s eyes.

“I interact with the villagers and mess around with the kids a little bit,” he said of the patrols he goes on.

“Biometrics is a good thing. It’s a census. It allows us to keep track of who’s coming in and out and who’s a good guy and bad guy.”

For the most part, he said, villagers are cooperative and want the bad guys to be identified. When they are, he said, “We go through specific procedures, detain them and take them back” to a secure location.

As the U.S. troop numbers dwindle toward less than 10,000, primarily to continue training of Afghan national forces, fighting by the Taliban to disrupt the coalition effort continues.

Sanchez has seen his share of firefights and expects there will be more with the Taliban.

“They usually get a jump on us, and when we have visual identification of the shooter, we do what we’re trained to do and fight back,” he said.

Sanchez said he hopes the U.S.-led effort to promote and preserve democracy for Afghan people will continue after he returns home.

“From what I’ve seen there are a lot of (Afghans) who truly care about what we’re doing here,” he said.

After he returns to his family in Las Vegas, he will begin preparing to transition to civilian life. He expects to be discharged from the Marines in January.

“I want to go back to school and find something hopefully that I love to do and pursue that,” he said.

“So far I’m looking at Ohio State. It has really good programs and is supportive of veterans.”