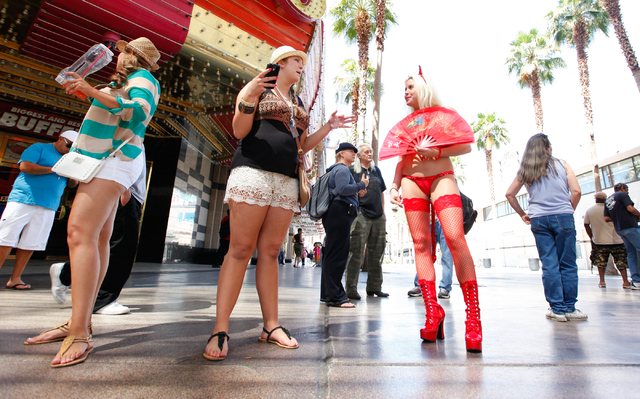 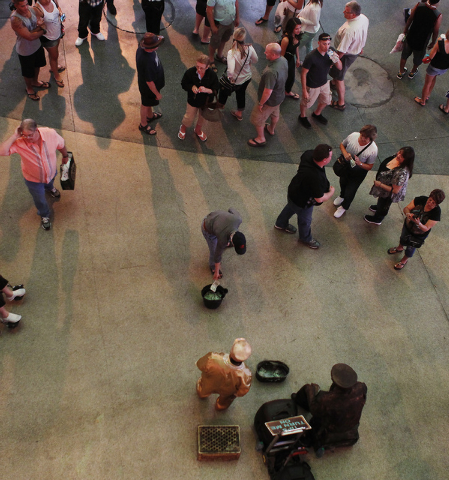 Goldmine, lower left in gold suit, and his partner, Gizmo, receive tips from people who gathered to see them perform at the Fremont Street Experience on May 22, 2014. Las Vegas city officials announced new tools on Thursday they plan to use to help rid downtown Fremont Street of overly aggressive street performers and panhandlers. (Jason Bean/Las Vegas Review-Journal file)

An increased police presence on Fremont Street was welcomed Thursday by an unlikely pair, the ACLU’s Allen Lichtenstein and a mostly naked busker who goes by “Misty.”

In response to Sheriff Doug Gillespie’s announcement there would be additional police assigned to downtown Fremont Street, Lichtenstein said it was a “good idea to increase the police presence” and enforce laws regarding assault.

The devilish Misty, who for a tip will move her fan and show her breasts covered only with pasties, also welcomed more police on the Fremont Street Experience, where the 27-year-old has worked for three seasons. A personal trainer, she and her husband estimated about three-fourths of the performers were among the overly aggressive ones, the ones outraging tourists and locals alike.

Las Vegas Mayor Carolyn Goodman and Gillespie believe increasing the police presence will discourage some of the more aggressive behavior taken by some buskers, who can be hostile toward people who fail to tip after taking photos.

The city plans to put up signage telling people they don’t have to tip someone to take their picture. Goodman referred to a “no touch rule,” but when asked what that was, she said it was OK to touch but not to be aggressive.

Lichtenstein said enforcement of existing laws governing assault is a good idea. He said the laws are clear. Assault is a crime and people aren’t required to tip; it’s purely voluntary.

Lichtenstein said he’d rather see more police officers who know the law on the street “than security guards who make it up as they go along.”

The American Civil Liberties Union of Nevada and the city have been at odds for 15 years over whether the managers of the Fremont Street Experience could ban the street performers and buskers who work for tips. So far, it’s three victories for the ACLU and zip for the city in a case that has gone to the 9th U.S. Circuit Court of Appeals three times. Each time the city’s efforts have lost out to First Amendment rights.

Since March, there have been nine officers and a sergeant on Fremont Street Experience and Fremont Street East on an average night, and more on special-event nights, such as First Friday.

Additional police will be added immediately. Gillespie said he will know in a few weeks how many more officers are needed. “I’m not giving the numbers because the numbers will move.”

Undercover officers will also be working the street.

The sheriff is authorizing overtime which had been in the budget because of the anticipation there would be a Culinary strike downtown, but the strike was averted. “We’ll reach out to the hotels to assist us with the overtime positions.”

He is confident that a more visible police presence will discourage people from “feeling empowered to push the envelope.” They might decide to migrate to other areas, he said.

Police Capt. Shawn Anderson emphasized that there is a perception that Fremont Street is unsafe, but that’s not the reality. “We’ve seen an increase in visitors from 2012 to now but violence and property crime is flat.”

Code enforcement will be stepped up on the mall and the city will take a look at the sources of performers’ amplifiers which could be fire hazards. “Public safety is my top priority,” Goodman said.

She said with the success and popularity of Fremont Street, “We’ve also seen some growing pains.” She cited rude, vulgar and aggressive street performers as among those pains.

“We can encourage people not to tip,” she said, adding there is “no obligation to tip, but we don’t want to preclude them from tipping bartenders.”

Police, fire, city officials, and hotel executives are joining together in a collaborative effort to try to deal with problems enhanced by excessive alcohol.

Derek Stevens, an owner/operator of the D and the Golden Gate, said he has increased his security by 20 percent over the past year because of complaints about street performers and package liquor stores. “We only sell to those over 21. Buskers are willing to sell to the under-aged, which is creating a problem.”

He said revenue has not dropped because new people are visiting, but groups have said they will not return downtown. “Some customers and groups and online sites are concerned and scared,” Stevens said, calling this a “forefront issue.”