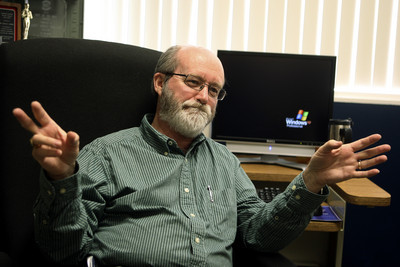 This is the tragic irony of a tough economy: Less equals more.

Which all means less money equals more work for people such as Larry Ashley.

“The need is amazing and the treatment resources nowhere near meet the need,” Ashley said.

Ashley is a University of Nevada, Las Vegas professor. He studies post-traumatic stress disorder. He advises the police on the mentally ill. He is working on projects — separate projects — involving prisoners and strippers.

Ashley joined UNLV in 2000 after a lifetime in the counseling field. The university’s counseling training programs last month were named among the top 10 in the nation by the Council for Accreditation of Counseling and Related Education Programs.

Ashley, a professor in the college of education, helps run the counseling training programs.

He is an expert in problem gambling. He’s the director and founder of the university’s Problem Gambling Treatment Program.

The program is funded through a state tax on slot machines, enacted by the Legislature three years ago. But times are hard, and tax revenue is down because people aren’t dropping as much money in the casinos as they used to. Nevada Gaming Board figures show casinos have taken in 9 percent less this year than last year.

Which is the irony. While gambling overall is down because of the economy, problem gambling can increase in such times.

Despite that, the program’s budget has been slashed by two-thirds, Ashley said.

Most clients, who are referred to the program through other social service agencies, have no money and therefore can’t pay.

“I don’t turn anybody away, whether they can afford treatment or not,” Ashley said. Clients range from college-age to those in their 80s, he said.

The program’s main purpose is to train future counselors, of which there is a shortage in Nevada and elsewhere.

Lindsey Harrison is one of those future counselors.

She is the lone paid graduate assistant in the program. Her salary is paid through a grant from Harrah’s.

Harrison, 24, was born and raised in Las Vegas. She said problem gambling is worse here than many people realize.

“It’s kind of a big secret we keep here in Las Vegas,” she said.

She treats clients in the UNLV program and hopes to do it professionally after graduation.

Carol O’Hare, executive director of the Nevada Council on Problem Gambling, said the whole industry has seen a reduction in funding, as have other areas of mental health.

She said the stress of hard economic times can lead to an increase in problem gambling and other addiction issues.

“Problem gambling as a mental health disorder is not about spending money,” she said. “It’s about people engaging in a behavior they do to deal with stress.”

Less money equals more stress, which equals more hiding from reality, which, for a problem gambler, equals more problems and, so, less money.

Which means that sometimes, less really does equal less.