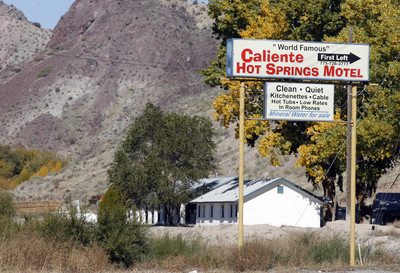 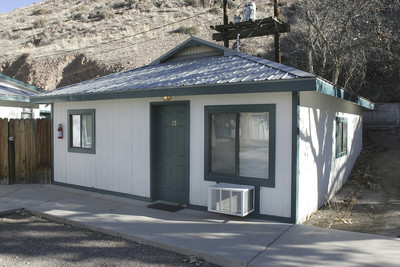 For most tourists headed to the Caliente Hot Springs Motel and Spa, the main draw is the hot mineral water piped into the rooms.

But Warren Jeffs, the self-proclaimed prophet of a polygamous sect, was drawn to the motel for a different reason: privacy.

For years he conducted weddings between teenage girls, some as young as 14, and older men in Room 15 at the motel 150 miles north of Las Vegas, investigators, former members and others said.

“Warren’s really quite paranoid. He just doesn’t want anyone to witness anything that would get him in trouble,” said Carolyn Jessop, a former member of the Fundamentalist Church of Jesus Christ of Latter Day Saints who ran the motel for a year.

Jeffs now stands trial in St. George, Utah, on charges he married off a 14-year-old girl to her 19-year-old cousin in Caliente and ordered her to have sex with the teen.

Rumors swirled that he continued performing marriages at the motel while he was on the run.

Jessop’s husband, Merrill Jessop, and her father, Nathan Jessop, bought the motel in late 1997. For the next seven years it was the site of many secretive nuptials, said Carolyn Jessop, who escaped the sect with her eight children in 2003.

“We didn’t know who was marrying whom,” said Carolyn Jessop, 39, who was forbidden to witness the ceremonies.

The FLDS members would call ahead and book their rooms, usually when business was slow. Any other rooms were left vacant to preserve secrecy, she said.

The wedding parties and top church officials would gather in Room 15 to conduct five or six weddings in a couple of hours. When they finished, the couples went to their rooms while the church leaders feasted on healthy fare such as fruits, vegetables and sprouted green bread, said Jessop, who has written about her FLDS experience in her upcoming autobiography “Escape.”

The Jessops sold the motel in 2004 to a Las Vegas company.

The harvest is shipped across the nation, with many of the potatoes produced by the Lincoln County farm ending up as hash browns served to tourists at Las Vegas casinos, said Sam Brower, a private investigator who has spent years probing the secretive church.

A farmhand at the property declined to answer questions, saying, “We haven’t been represented right,” referring to media coverage of the FLDS church.

He referred questions to farm owner Michael Harker, who did not respond to requests for an interview.

Lincoln County Sheriff Kerry Lee said locals seem to have little interest in whether the farm is linked to the polygamous sect. From a policing standpoint, there has been only one incident: a Harker family feud in which Lee responded to the farm and intervened between two groups of men armed with guns.

“It was a volatile situation,” Lee said. “Other than that, we’ve had no problems.”

The farm bolsters the tax base and otherwise aids the economy.

“That farm is the largest power user in the county,” Lincoln County Commissioner Spencer Hafen said. “In the summer, they pull more power than the city of Caliente.”