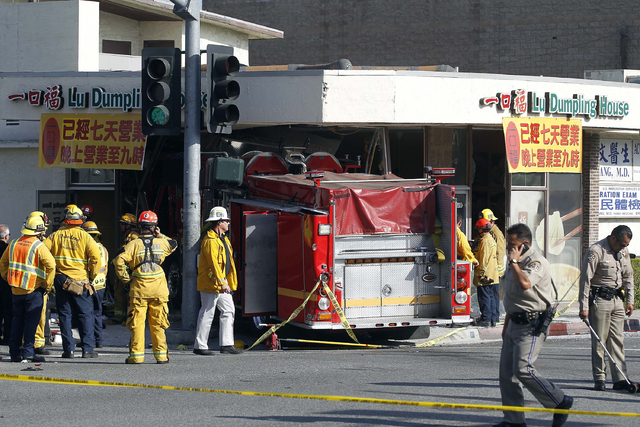 Firefighters and other officials work the scene of an accident where two firetrucks answering a call collided en route to a fire Wednesday, April 16, 2014, in Monterrey Park, Calif. The collision sent one firetruck careening into a restaurant, leaving 14 people, including several firefighters, injured. (AP Photo/Nick Ut) 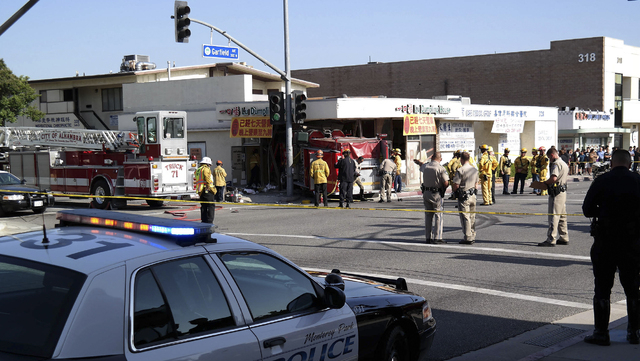 Firefighters and other officials work the scene of an accident where two firetrucks answering a call collided en route to a fire Wednesday, April 16, 2014, in Monterrey Park, Calif. The collision sent one firetruck careening into a restaurant, leaving 14 people, including several firefighters, injured. (AP Photo/Nick Ut)

MONTEREY PARK, Calif. — Two firetrucks heading to a burning home collided Wednesday in a Los Angeles suburb, sending one careening into a restaurant and injuring 15 people, including six firefighters.

One man, who isn’t a firefighter, was hospitalized in critical condition, officials said.

The crash on a busy commercial strip in Monterey Park left one truck embedded in the restaurant, with shattered glass and rubble heaped on the sidewalk. Chairs and tables were scattered inside.

“There was a loud boom and a lot of shaking. I thought it was an earthquake,” said Wendy Wu, a waitress at Lu Dumpling House. She was in a walk-in freezer when the truck plowed through the front of the restaurant.

When she walked out of the freezer, uninjured, she saw a refrigerator pushed across the room and furniture in disarray. Wearing a uniform with the restaurant logo and speaking through an interpreter, Wu said she saw several injured people bleeding and attempting to stand.

Waitress Vivian Lu arrived for her shift moments after the truck rammed the building. She said she saw “a lot of people covered with blood,” including a pedestrian with a mangled leg who had been knocked into the restaurant.

Trucks from Monterey Park and neighboring Alhambra, with lights and sirens activated, were responding to a house fire shortly after 3 p.m. when they slammed into each other, authorities said.

The Monterey Park truck plowed halfway into the restaurant.

Rosa Saca, a spokeswoman for Los Angeles County-USC Medical Center, said nine victims were brought there, including five firefighters. The critically injured person was among the hospital’s patients but is not one of the firefighters, she said.

Erik Jiang, a spokesman for Garfield Medical Center in Monterey Park, said six victims from the crash were treated at the hospital. None was in critical condition, he added.

An investigation was underway to determine what caused the crash.