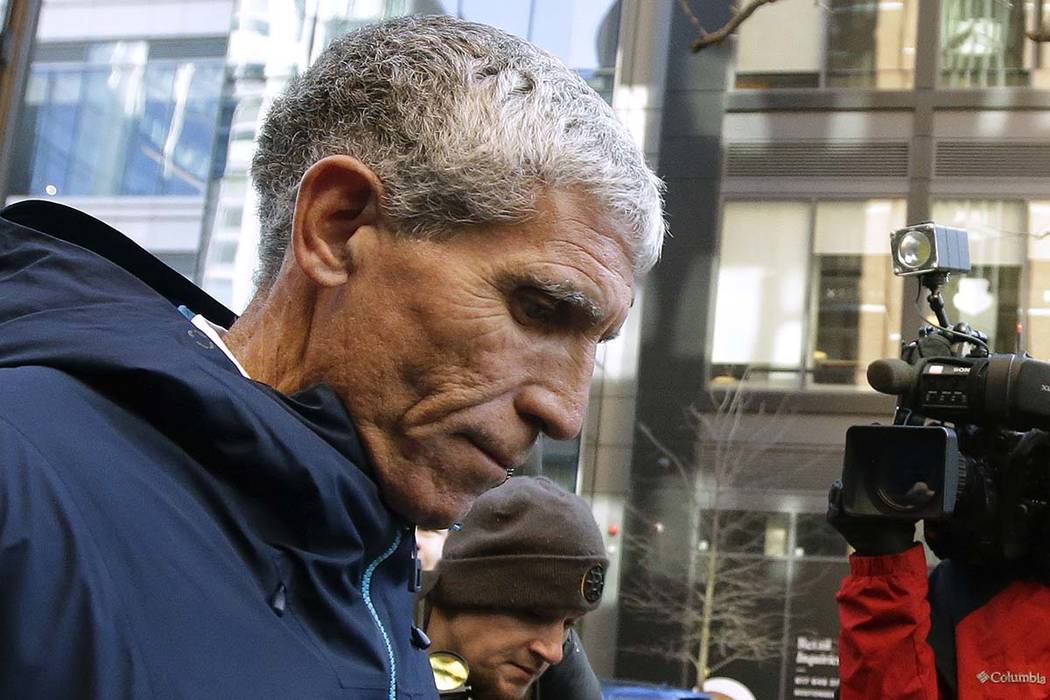 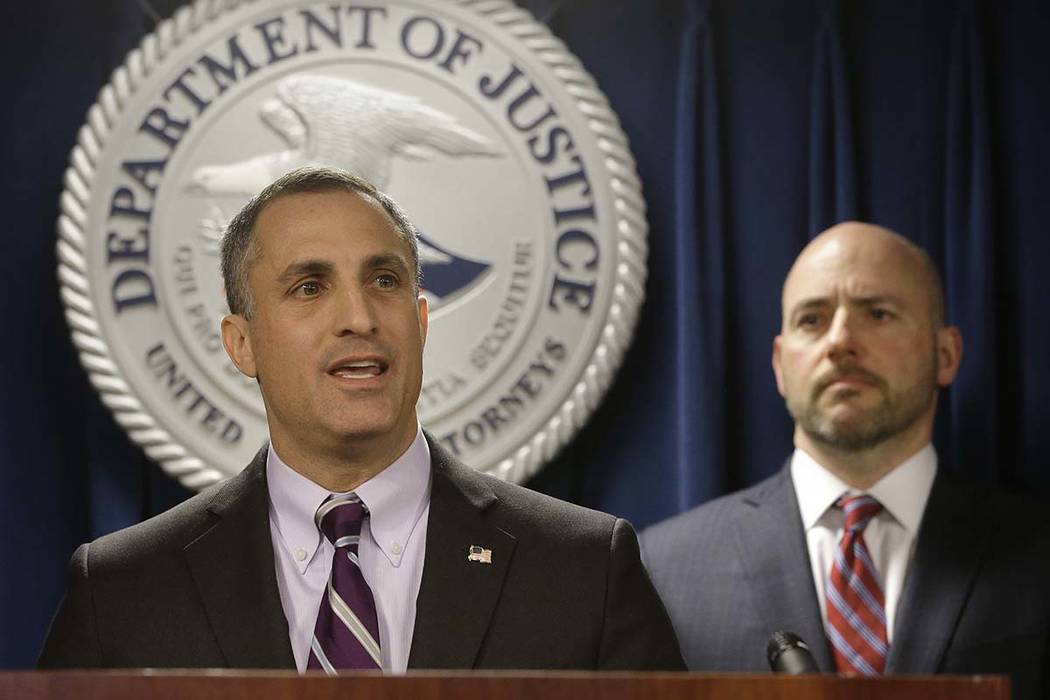 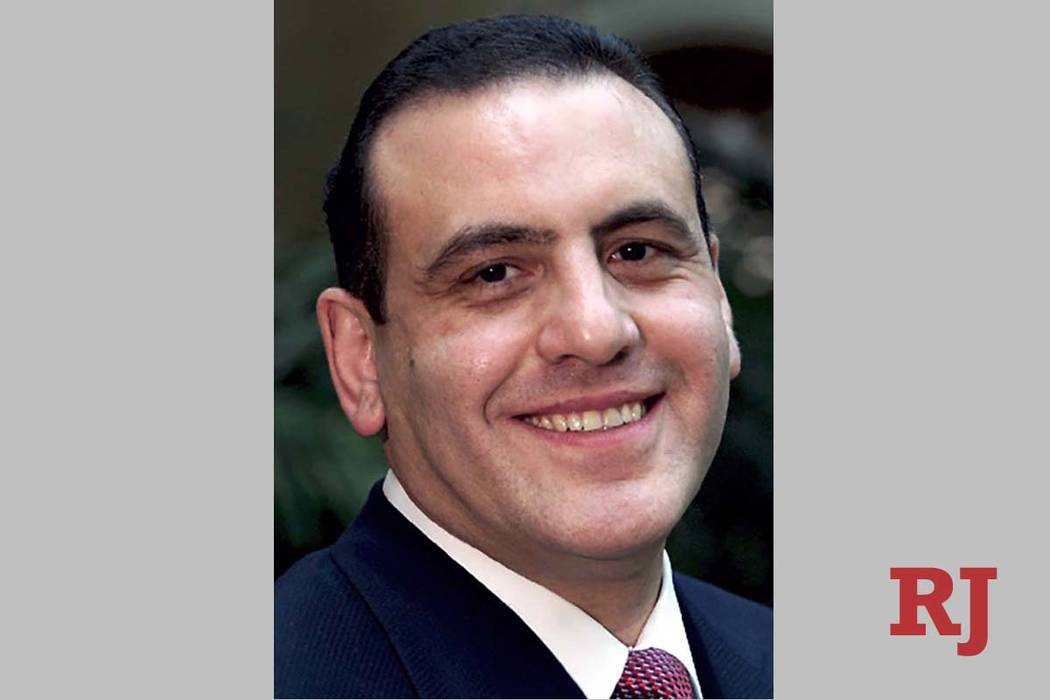 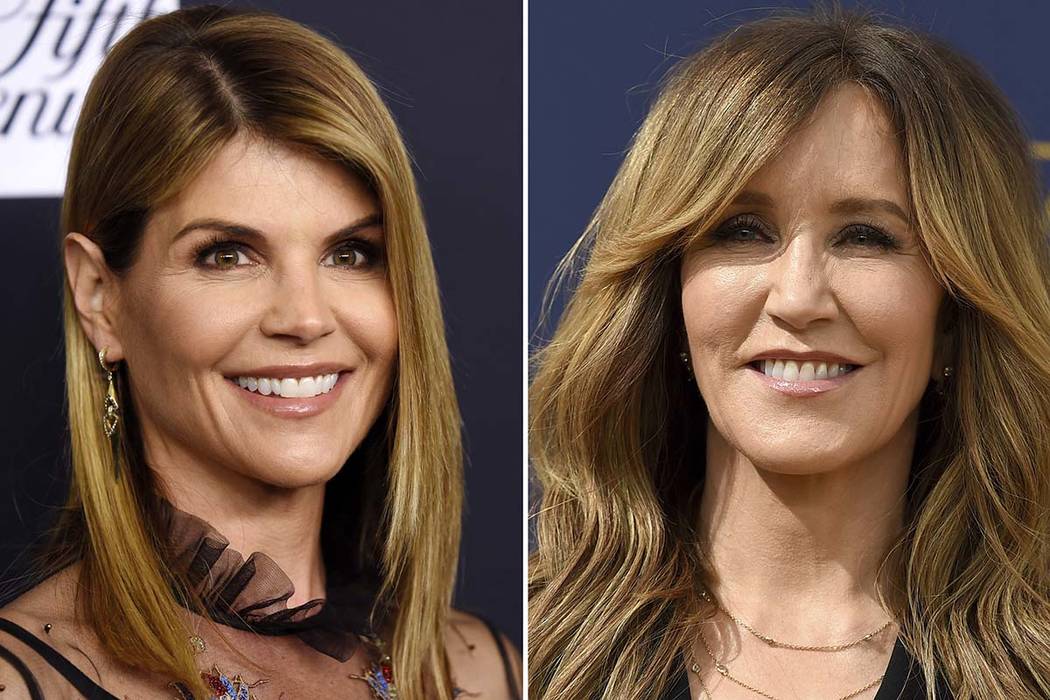 Actresses Lori Loughlin, left, and Felicity Huffman are among nearly 50 people indicted in a sweeping college admissions bribery scandal. Both were charged with conspiracy to commit mail fraud and wire fraud in indictments unsealed Tuesday in federal court in Boston. (AP Photos) 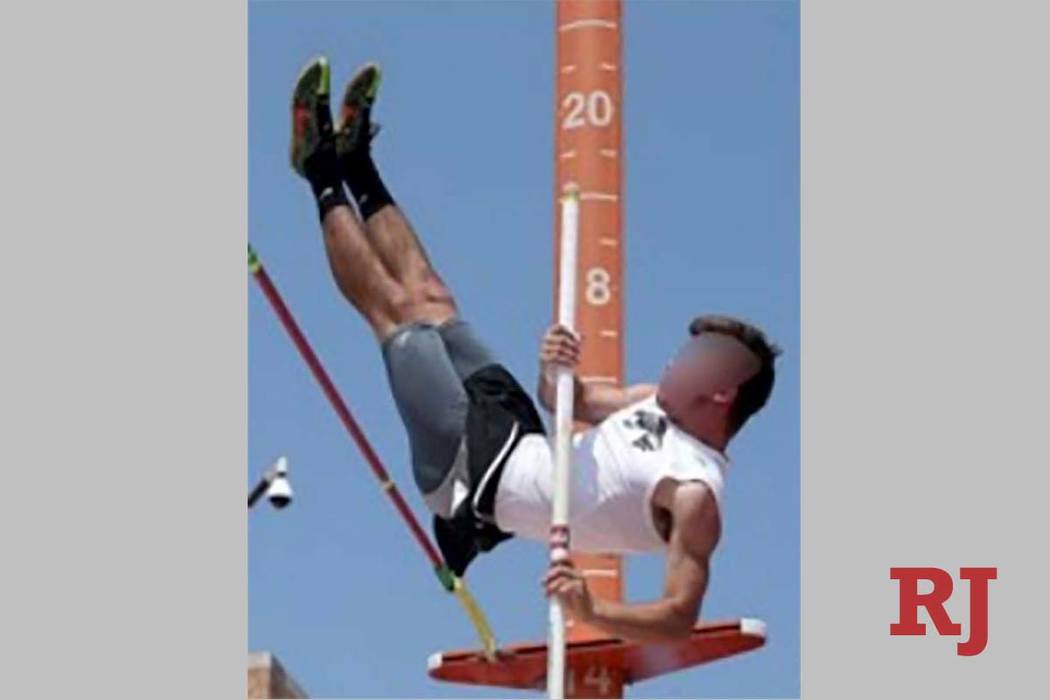 This photo was submitted with an athlete profile for Elisabeth Kimmel’s son, who was applying to the University of Southern California, but it depicts someone else. The photo was included in an affidavit in support of a criminal complaint. (U.S. Department of Justice) 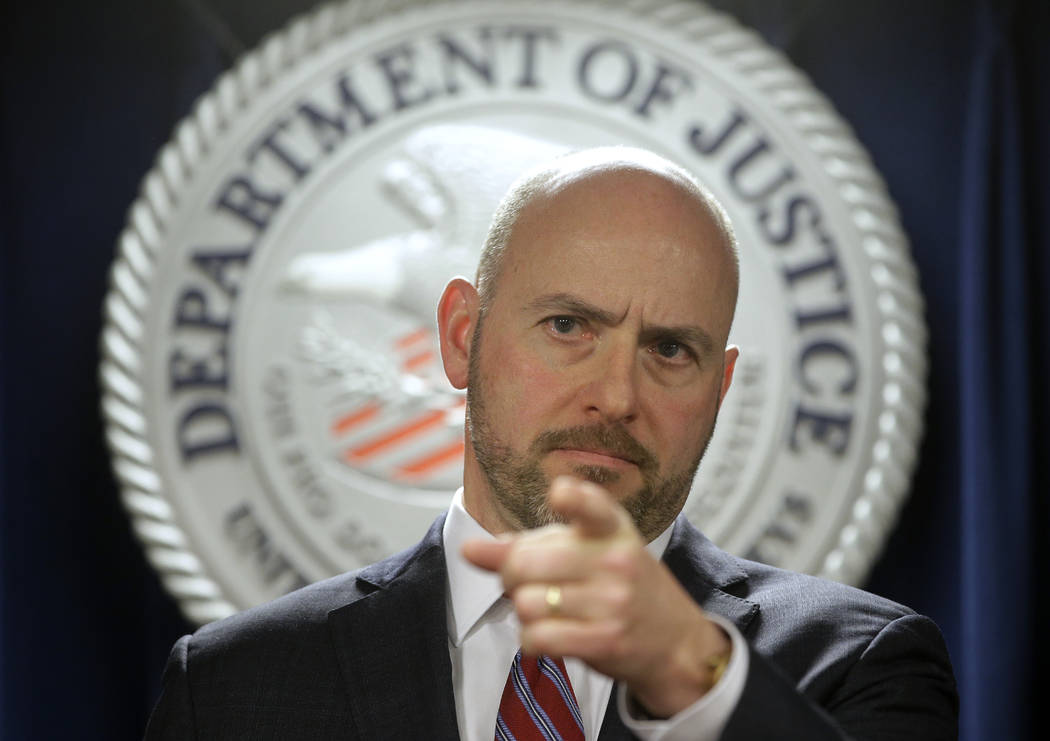 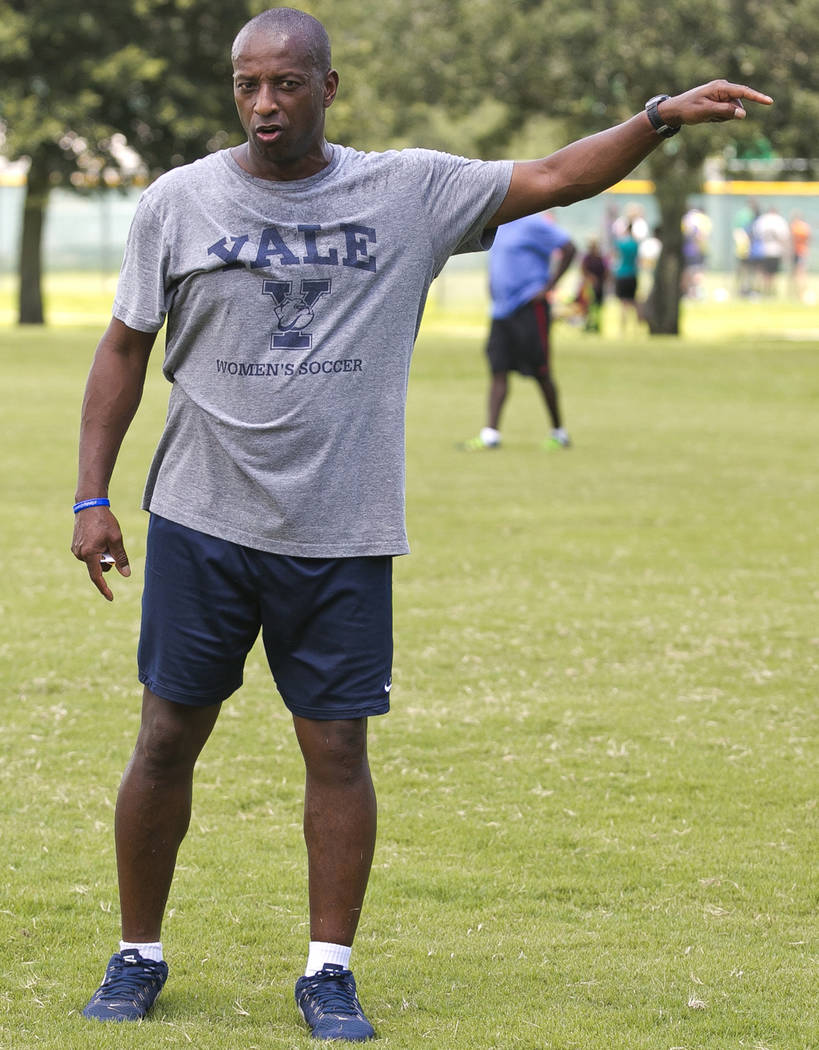 Yale's women's head soccer Coach Rudy Meredith gives pointers to players during a scrimmage in Ocala, Fla., September 2016. According to the federal indictments unsealed Tuesday, March 12, 2019, former Yale soccer coach Rudy Meredith put a prospective student who didn’t play soccer on a school list of recruits, doctored her supporting portfolio to indicate she was a player, and later accepted $400,000 from the head of a college placement company. (Doug Engle/Star-Banner via AP) 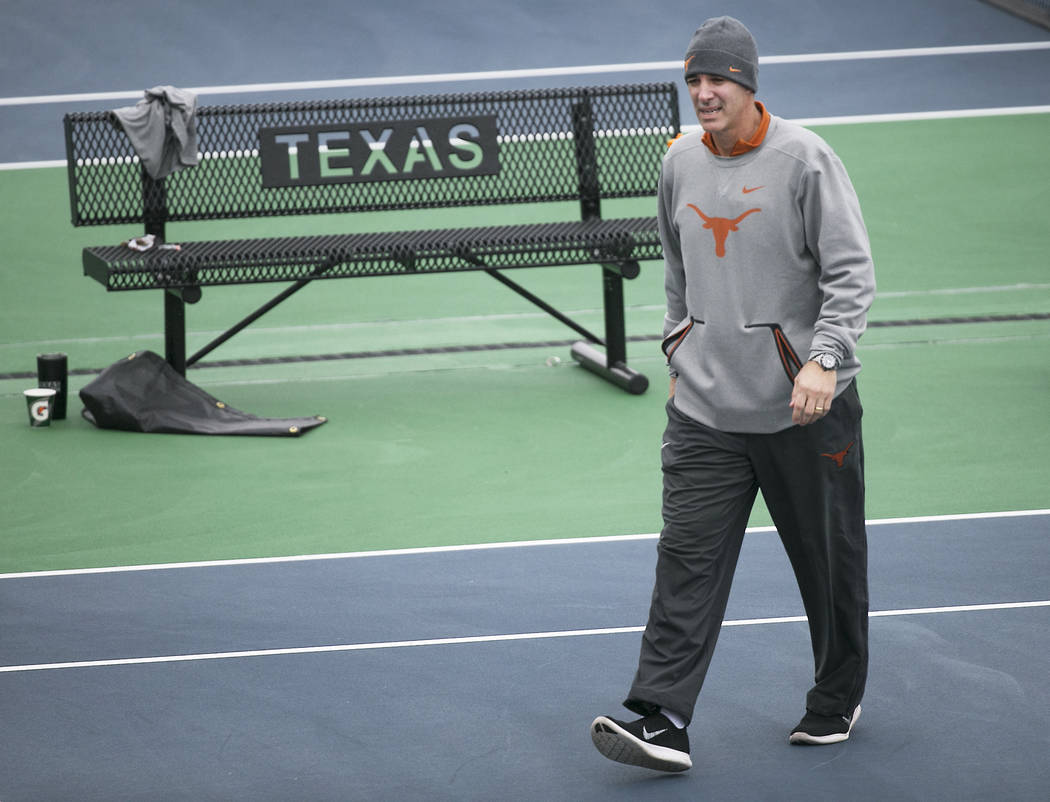 Texas men’s tennis coach Michael Center surveys the courts before the matches with UTSA, in Austin, Texas, January 2018. Center is among a few people in the state charged in a scheme that involved wealthy parents bribing college coaches and others to gain admissions for their children at top schools, federal prosecutors said Tuesday, March 12, 2019. (Ralph Barrera/Austin American-Statesman via AP) 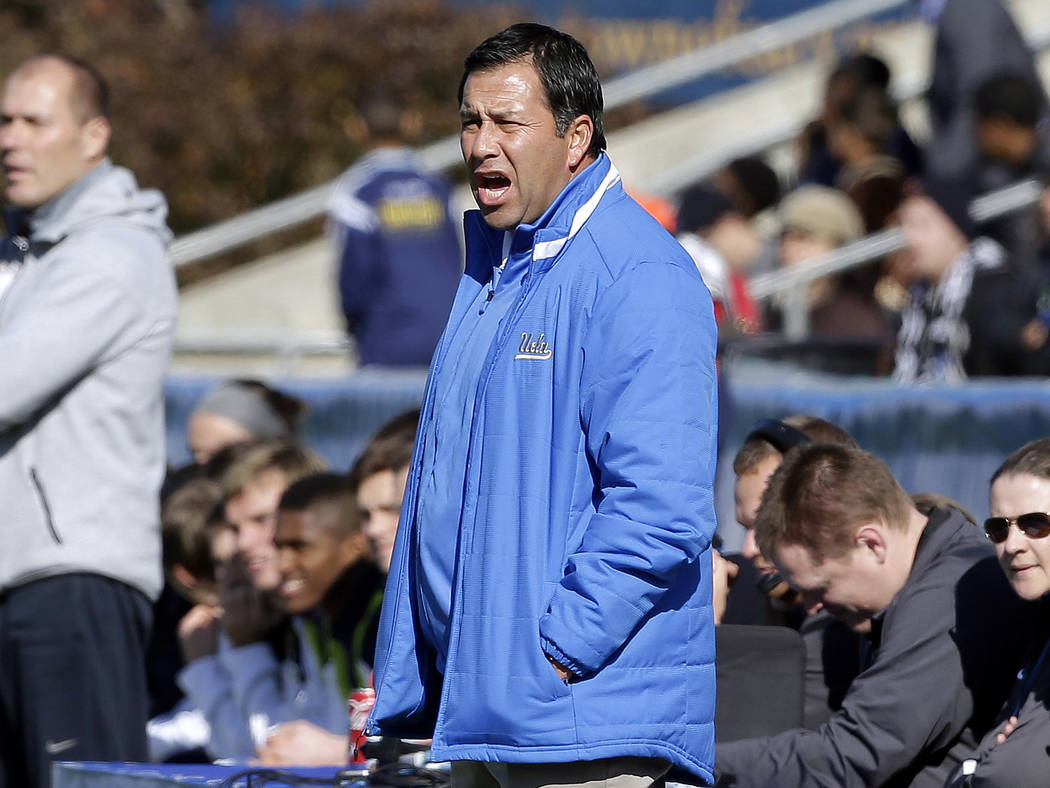 UCLA coach Jorge Salcedo reacts during the first half of an NCAA College Cup championship soccer game against Virginia in Cary, N.C., Dec. 14, 2014. Salcedo was charged along with nearly 50 other people Tuesday, March 12, 2019, in a scheme in which wealthy parents bribed college coaches and insiders at testing centers to get their children into some of the most elite schools in the country, federal prosecutors said Tuesday, March 12, 2019. (Gerry Broome/AP, File) 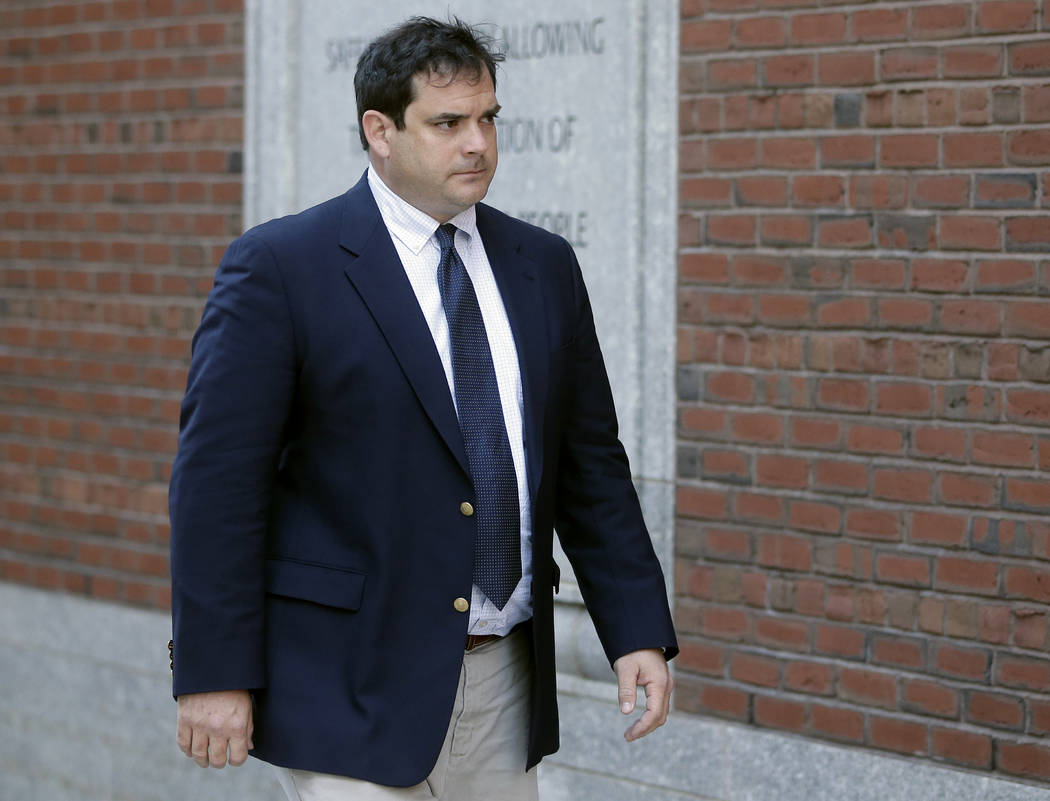 John Vandemoer, former head sailing coach at Stanford, arrives at federal court in Boston on Tuesday, March 12, 2019, where he was expected to plead guilty to charges in a nationwide college admissions bribery scandal. (Steven Senne/AP)

BOSTON — Fifty people, including Hollywood stars Felicity Huffman and Lori Loughlin, were charged Tuesday in a scheme in which wealthy parents allegedly bribed college coaches and other insiders to get their children into some of the nation’s most selective schools.

Federal authorities called it the biggest college admissions scam ever prosecuted by the U.S. Justice Department, with the parents accused of paying an estimated $25 million in bribes.

At least nine athletic coaches and 33 parents, many of them prominent in law, finance, fashion, the food and beverage industry and other fields, were charged. Dozens, including Huffman, the Emmy-winning star of ABC’s “Desperate Housewives,” were arrested by midday.

An affidavit in support of a criminal complaint, unsealed Tuesday, lists Aziz by his given last name, Abdelaziz, although he goes by the shortened version.

Aziz is currently listed as chairman and CEO of Legacy Hospitality Group on his LinkedIn profile. The profile also lists a previous position as president and executive director of Wynn Macau Limited, responsible for the development of the $4.4 billion Wynn Palace resort, which opened in August 2016 in Macau’s Cotai region.

He is accused of conspiring to bribe the senior associate athletic director at the University of Southern California to designate his daughter as a recruit to the USC basketball team, “in order to facilitate her admission to the university.”

His daughter enrolled at USC in the fall, according to the affidavit, but did not join the basketball team.

The document describes Kimmel a resident of Las Vegas and La Jolla, California, and as the owner and president of a media company.

Kimmel’s daughter graduated around May 2017 and was not a member of the tennis team during her four years at Georgetown University, according to the affidavit. Kimmel’s son was admitted to USC in March 2018.

“These parents are a catalog of wealth and privilege,” U.S. Attorney Andrew Lelling said in announcing the results of a fraud and conspiracy investigation code-named Operation Varsity Blues.

Two more of those charged — Stanford’s sailing coach and the college-admissions consultant at the very center of the scheme — pleaded guilty Tuesday in Boston. Others appeared in court and were released on bail.

No students were charged, with authorities saying that in many cases the teenagers were unaware of what was going on. Several of the colleges involved made no mention of taking any action against the students.

The scandal is certain to inflame longstanding complaints that children of the wealthy and well-connected have the inside track in college admissions — sometimes through big, timely donations from their parents — and that privilege begets privilege.

College consultants were not exactly shocked by the allegations.

“This story is the proof that there will always be a market for parents who have the resources and are desperate to get their kid one more success,” said Mark Sklarow, CEO of the Independent Educational Consultants Association. “This was shopping for name-brand product and being willing to spend whatever it took.”

The central figure in the scheme was identified as admissions consultant William “Rick” Singer, founder of the Edge College & Career Network of Newport Beach, California. He pleaded guilty, as did Stanford’s John Vandemoer.

Singer’s lawyer, Donald Heller, said his client intends to cooperate fully with prosecutors and is “remorseful and contrite and wants to move on with his life.”

Prosecutors said that parents paid Singer big money from 2011 through last month to bribe coaches and administrators to falsely make their children look like star athletes to boost their chances of getting accepted. The consultant also hired ringers to take college entrance exams for students, and paid off insiders at testing centers to correct students’ answers.

Some parents spent hundreds of thousands of dollars and some as much as $6.5 million to guarantee their children’s admission, officials said.

“For every student admitted through fraud, an honest and genuinely talented student was rejected,” Lelling said.

Several defendants, including Huffman, were charged with conspiracy to commit fraud, punishable by up to 20 years in prison.

Lelling said the investigation is continuing and authorities believe other parents were involved. The IRS is also investigating, since some parents allegedly disguised the bribes as charitable donations. The colleges themselves are not targets, the prosecutor said.

The investigation began when authorities received a tip about the scheme from someone they were interviewing in a separate case, Lelling said. He did not elaborate.

Authorities said coaches in such sports as soccer, sailing, tennis, water polo and volleyball took payoffs to put students on lists of recruited athletes, regardless of their ability or experience. Once they were accepted, many of these students didn’t play the sports in which they supposedly excelled.

The applicants’ athletic credentials were falsified with the help of staged photographs of them playing sports, or doctored photos in which their faces were pasted onto the bodies of genuine athletes, authorities said.

Prosecutors said parents were also instructed to claim their children had learning disabilities so that they could take the ACT or SAT by themselves and get extra time. That made it easier to pull off the tampering, prosecutors said.

Among the parents charged was Gordon Caplan of Greenwich, Connecticut, co-chairman of the international law firm Willkie Farr & Gallagher, based in New York. He and other parents did not immediately return telephone or email messages for comment.

Caplan was accused of paying $75,000 to get a test supervisor to correct the answers on his daughter’s ACT exam after she took it. In a conversation last June with a cooperating witness, he was told his daughter needed to “be stupid” when a psychologist evaluated her for learning disabilities that would entitle her to more time to take the test, according to court papers.

The witness described the scheme as “the home run of home runs.”

“And it works?” Caplan asked.

“Every time,” the witness responded, prompting laughter from both.

A number of colleges moved quickly to fire or suspend the coaches and distance themselves from the scandal, portraying themselves as victims. Stanford fired the sailing coach, and USC dropped of its water polo coach and an athletic administrator. UCLA suspended its soccer coach, and Wake Forest did the same with its volleyball coach.

Loughlin, who was charged along with her husband, fashion designer Mossimo Giannulli, appeared in the ABC sitcom “Full House” in the 1980s and ’90s. Huffman was nominated for an Oscar for playing a transgender woman in the 2005 movie “Transamerica.” She also starred in the TV show “Sports Night” and appeared in such films as “Reversal of Fortune,” ”Magnolia” and “The Spanish Prisoner.”

Loughlin and her husband allegedly gave $500,000 to have their two daughters labeled as recruits to the USC crew team, even though neither participated in the sport. Their 19-year-old daughter Olivia Jade Giannulli, a social media star with a popular YouTube channel, is now at USC.

Court documents said Huffman paid $15,000 that she disguised as a charitable donation so that her daughter could take part in the entrance-exam cheating scam.

Court papers said a cooperating witness met with Huffman and her husband, actor William H. Macy, at their Los Angeles home and explained to them that he “controlled” a testing center and could have somebody secretly change her daughter’s answers. The person told investigators the couple agreed to the plan.

Macy was not charged; authorities did not say why.

The couple’s daughter, Sofia, is an aspiring actress who attends Los Angeles High School of the Arts.

Messages seeking comment from Huffman’s representative were not immediately returned. A spokeswoman for Loughlin had no comment.

In another case, a young woman got into Yale in exchange for $1.2 million from the family, prosecutors said. A false athletic profile created for the student said she had been on China’s junior national development soccer team.

Prosecutors said Yale coach Rudolph Meredith received $400,000, even though he knew the student did not play competitive soccer. He did not return messages seeking comment.

Sklarow, the independent education consultant unconnected to the case, said the scandal “certainly speaks to the fact that the admissions process is broken.”

“It’s so fraught with anxiety, especially at the elite schools,” he said, “that I think it can’t be surprising that millionaires who have probably never said no to their kids are trying to play the system in order to get their child accepted.”

5
Man arrested after woman beaten to death in ‘unprovoked’ attack