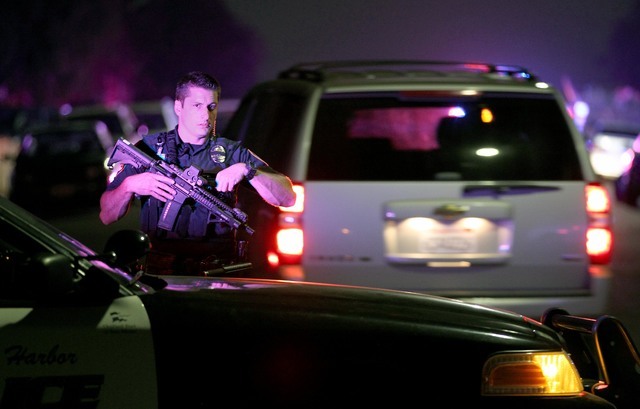 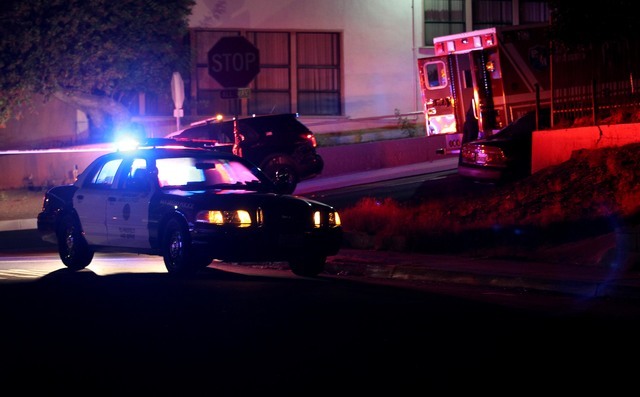 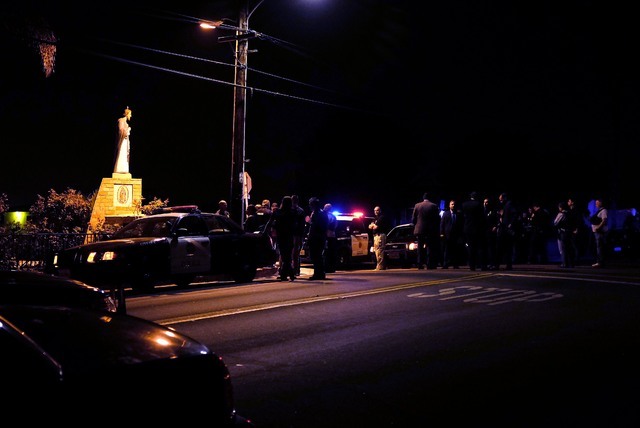 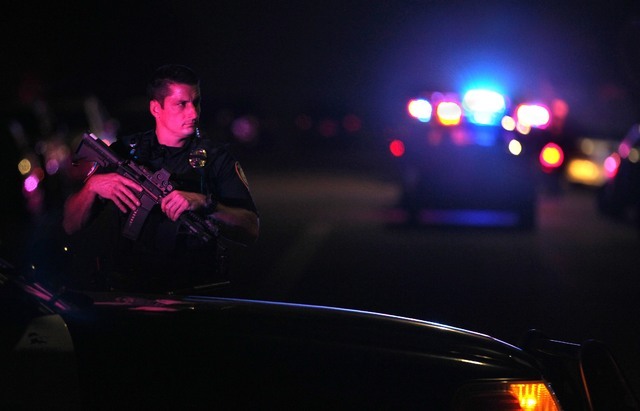 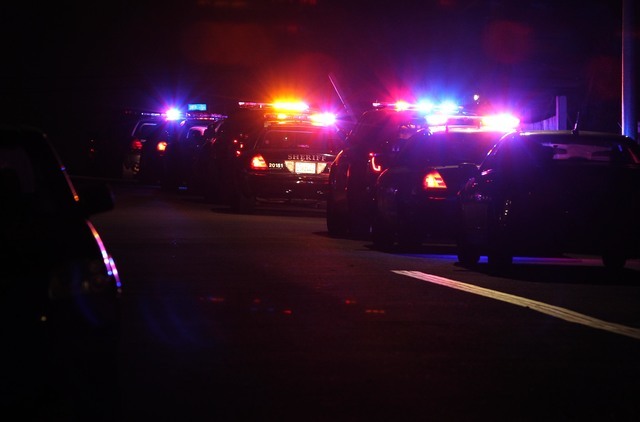 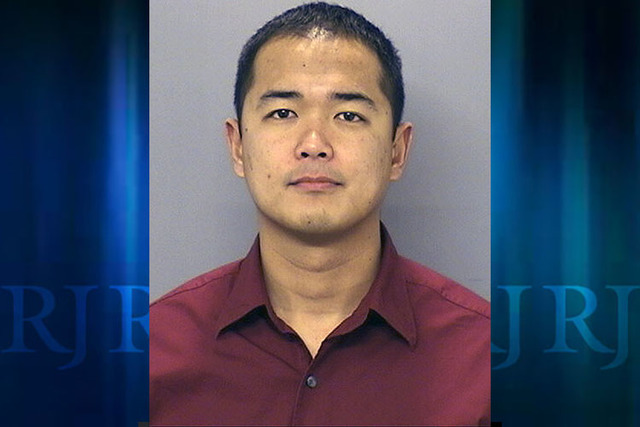 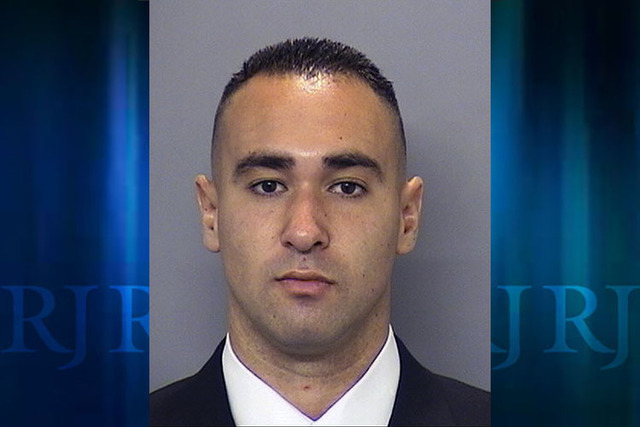 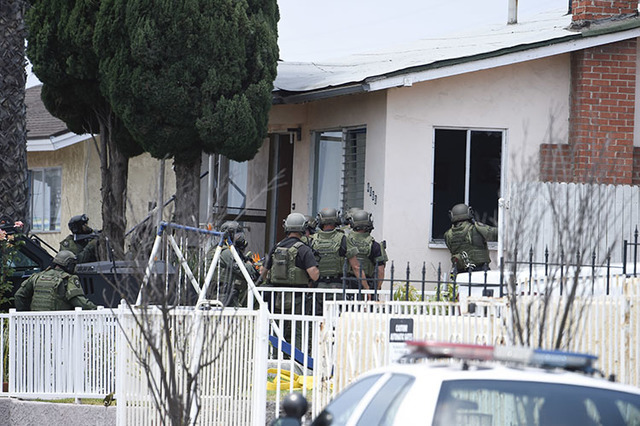 San Diego Police SWAT officers break out windows as they enter a house with a possible suspect inside Friday, July 29, 2016 in San Diego. One San Diego police officer was killed and another was wounded in a shootout following a late-night traffic stop, Friday night. A suspect was wounded and taken into custody a short time later and hours later police surrounded the home as they searched for man described as a possible accomplice. (AP Photo/Denis Poroy)

SAN DIEGO — Two San Diego police officers were shot — one fatally — after a late-night stop turned into a gunfight, triggering a massive manhunt that led to the capture of one wounded suspect in a ravine and an hours-long SWAT standoff Friday that ended with officers finding no one inside the home they had surrounded.

The shooting came as departments around the country are on high alert following the killing of officers in Dallas and Baton Rouge, Louisiana, this month. San Diego Police Chief Shelley Zimmerman said it was unknown whether the San Diego attack was premeditated.

The chain of events unfolded over more than 12 hours in a blue-collar area of southeastern San Diego with modest single-story homes and streets lined with palm trees.

It started about 11 p.m. Thursday = when two veteran gang unit officers in bulletproof vests stopped a person on a street. Almost immediately a shootout ensued and the officers called for backup.

Authorities initially said the officers made a traffic stop involving a motorist, but clarified later that they were still trying to determine whether it was a traffic stop or a stop to check out a pedestrian.

“It happened extremely quickly,” Police Chief Shelley Zimmerman said. “From the information that was put out that a stop was being made to that the officers called for emergency cover to when the other officers arrived on scene, we’re talking very, very quickly. Seconds to a minute or so.”

Jonathan DeGuzman, a 16-year veteran of the force who was married with two children, suffered multiple gunshot wounds. The 43-year-old died at Scripps Mercy Hospital after doctors’ efforts to save him failed.

Wade Irwin, 32, underwent surgery after being shot and was expected to survive, Zimmerman said. His wife was at his side during surgery.

A male suspect was captured in a nearby ravine and was being treated Friday at a hospital. Police did not identify him but Zimmerman said he was in critical condition with a gunshot wound.

Residents were ordered to stay in their homes throughout the night as San Diego police and officers from other law enforcement agencies scoured yards, streets and alleys for other possible suspects. A helicopter hovered over the neighborhood.

About nine hours after the shootout, heavily armed police officers surrounded a house about a half-mile away, one of them using a bullhorn to urge a man to surrender. Authorities also detonated several devices at the scene to draw him out.

They broke windows and pounded on the roof before entering the house but did not find the possible suspect inside.

Then, about a dozen heavily armed SWAT officers raced two blocks to another house, with an armored truck and robots positioned outside. The possible suspect wasn’t there either.

Greg Acosta, a 39-year-old electrician who lives at the second home targeted by SWAT officers, found his gates smashed after rushing home from work.

Zimmerman said she worked with DeGuzman before she was promoted to chief in 2014.

“I can tell you he is a loving, caring husband, father. Talked about his family all the time,” Zimmerman said. “I know him, and this is gut-wrenching. He cared. He came to work every single day wanting to just make a positive difference in the lives of our community and that’s why he lost his life.”

After visiting Irwin at UC San Diego Medical Center early Friday, Zimmerman told reporters that the officer’s prospects for recovery were good. The nine-year veteran of the force had just joined the gang unit in June.

“It’s a little bit of a long haul until he makes a full recovery, but the good news is that he is going to survive and he is going to recover,” she said.

“I ask all San Diegans and all people across our nation to join together in support of our officers who courageously protect our communities,” he added. “We need them and they need us.”

The shooting comes with law officers around the country on alert following the killing of officers in Dallas and Baton Rouge, Louisiana, this month.