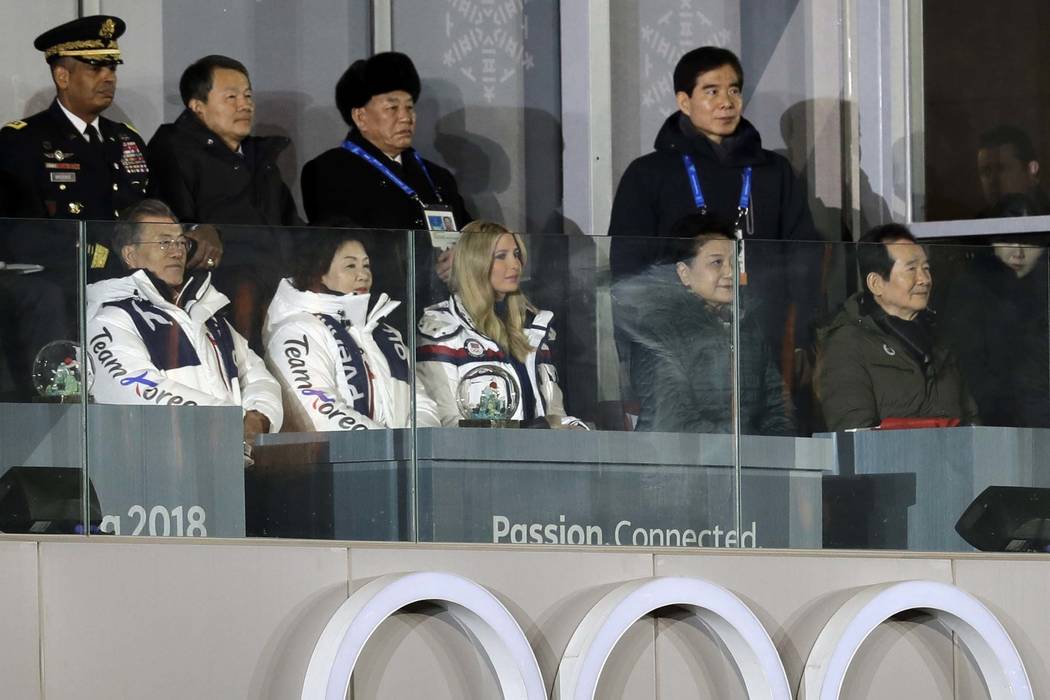 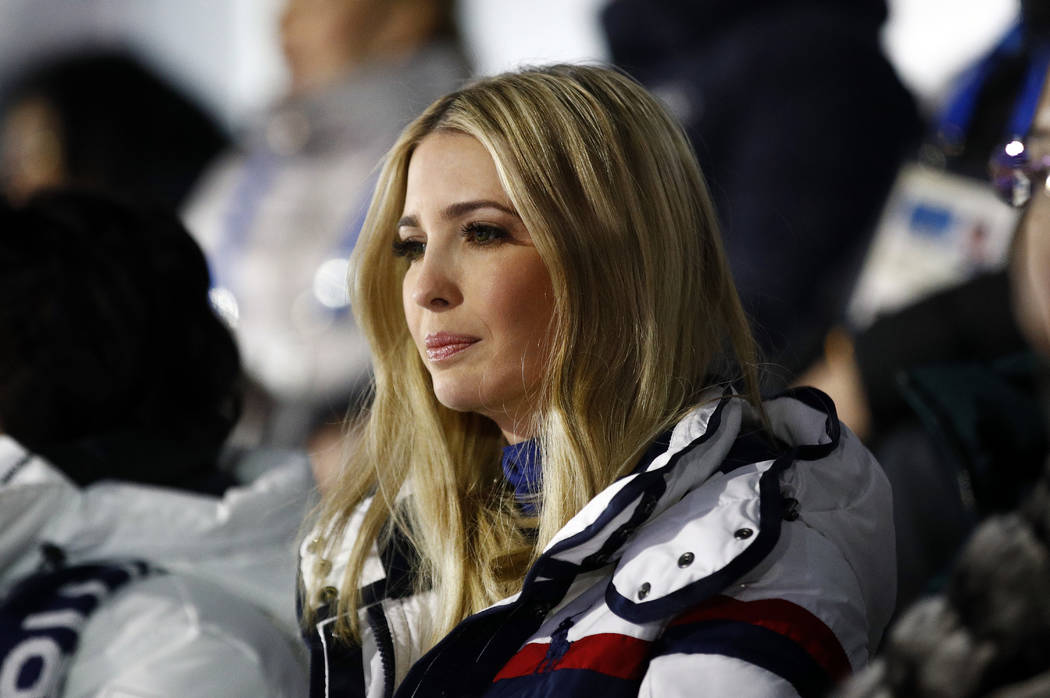 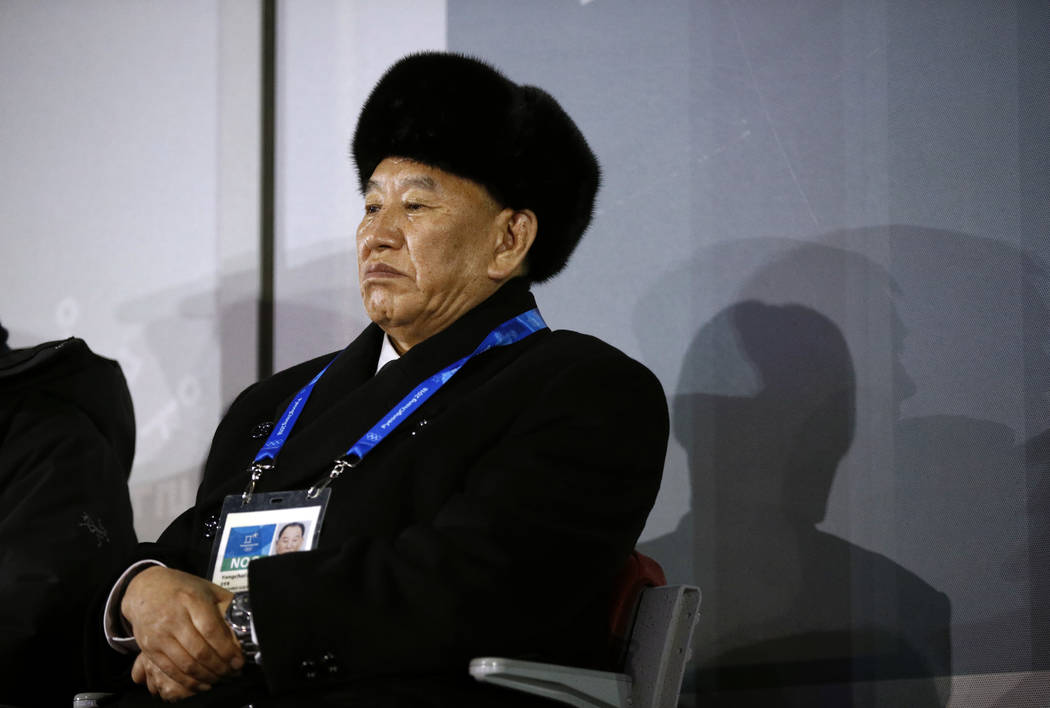 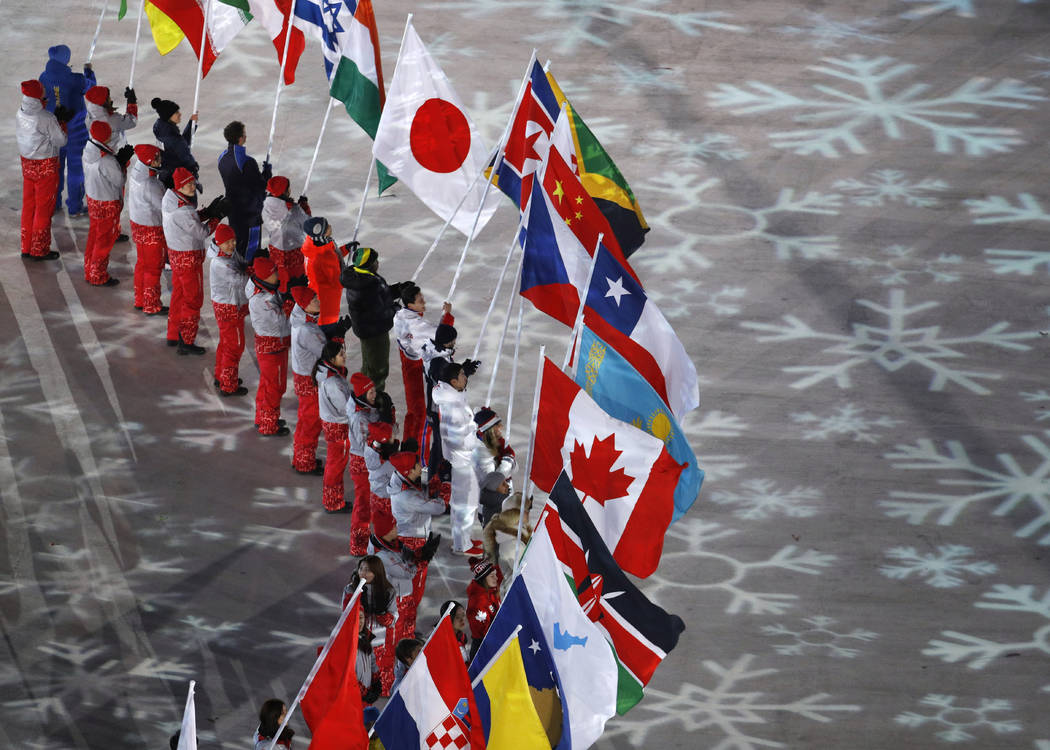 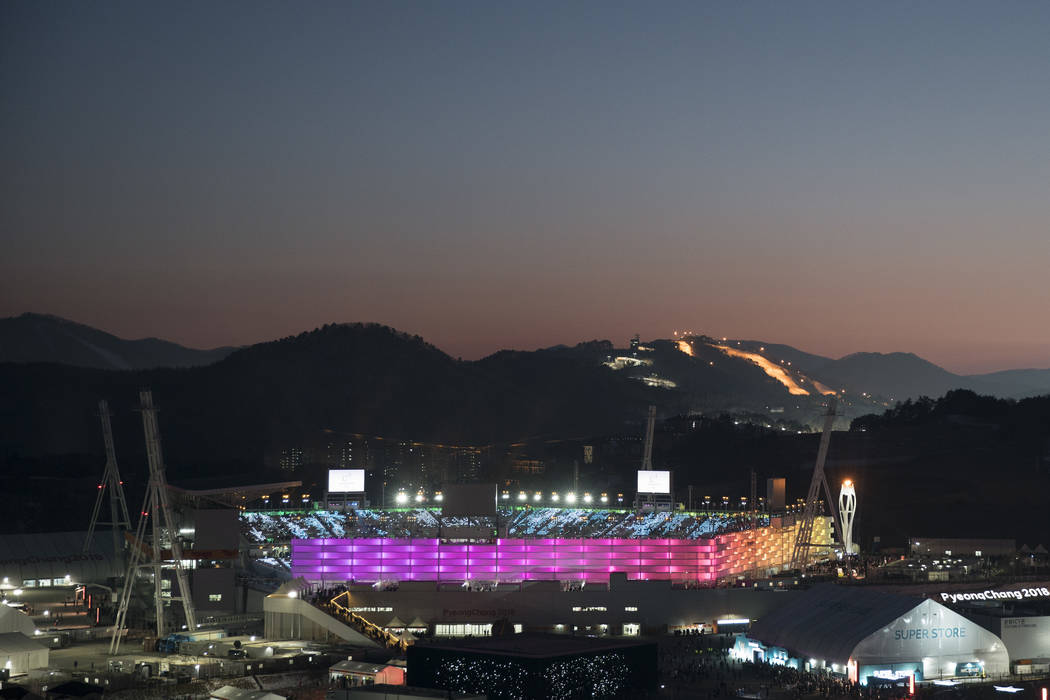 The Olympic Stadium is illuminated prior to the closing ceremony of the 2018 Winter Olympics in Pyeongchang, South Korea, Sunday, Feb. 25, 2018. (AP Photo/Felipe Dana)

PYEONGCHANG, South Korea — The overtly political 2018 Winter Olympics closed Sunday night very much as they began, with humanity’s finest athletes marching exuberantly across the world stage as three nations with decades of war and suspicion among them shared a VIP box — and a potential path away from conflict.

Senior North Korean official Kim Yong Chol, South Korean President Moon Jae-in and U.S. presidential adviser and first daughter Ivanka Trump sat in two rows of seats behind the Olympic rings, meant to represent a competition of peace and international unity. In close proximity — though with no apparent communication between Trump and Kim — they watched a spirited, elaborate show that concluded the Pyeongchang Games.

Even as dancers performed cultural stories to music before a huge crowd, South Korea’s presidential office released a brief statement saying that Pyongyang had expressed willingness to hold talks with Washington.

The North has “ample intentions of holding talks with the United States,” according to the office. The North’s delegation also agreed that “South-North relations and U.S.-North Korean relations should be improved together,” Moon’s office, known as the Blue House, said.

International Olympic Committee President Thomas Bach, just before declaring the games closed, addressed the two Koreas’ cooperation at the closing ceremony, saying, “The Olympic games are an homage to the past and an act of faith for the future.”

“With your joint march you have shared your faith in a peaceful future with all of us,” Bach said. “You have shown our sport brings people together in our very fragile world. You have shown how sport builds bridges.”

It was all an extraordinary bookend to an extraordinary Olympics that featured athletic excellence, surprises and unexpected lurches forward toward a new detente on the Korean Peninsula. Thrilled athletes marched into the arena around the world’s flags, relaxed after showing their athletic best to themselves and to the world.

“We have been through a lot so that we could blaze a trail,” said Kim Eun-jung, skip of the South Korean women’s curling team, which captured global renown as the “Garlic Girls” — all from a garlic-producing Korean hometown. They made a good run for gold before finishing with runner-up silver.

That these games would be circumscribed by politics was a given from the outset because of regional rivalries. North Korea, South Korea, Japan and China are neighbors with deep, sometimes twisted histories that get along uneasily with each other in this particular geographic cul-de-sac.

But there was something more this time around. Hanging over the entire games was the saga — or opportunity, if you prefer — of a delicate diplomatic dance between the Koreas, North and South, riven by bloodshed and discord and an armed border for the better part of a century.

The games started with a last-minute flurry of agreements to bring North Koreans to South Korea to compete under one combined Koreas banner. Perish the thought, some said, but Moon’s government stayed the course. By the opening ceremony, a march of North and South into the Olympic Stadium was watched by the world — and by dozens of North Korean cheerleaders applauding in calibrated synchronicity.

What followed was a strong dose of athletic diplomacy: two weeks of global exposure for the Korean team, particularly the women’s hockey squad, which trained for weeks with North and South side by side getting along, taking selfies and learning about each other.

Kim, President Donald Trump’s daughter and Moon sat in close proximity as the Olympics’ end unfolded before them and the statement was released in Seoul. Also seated nearby was Gen. Vincent Brooks, commander of U.S. forces Korea. Unlike Pence, Ivanka Trump was smiling as she turned in the North Koreans’ direction. It was not clear what she was smiling at, but a White House official said it was not the North Koreans.

The developments Sunday both inside and outside the VIP box were particularly striking given that Kim Yong Chol, now vice chairman of North Korea’s ruling Workers’ Party Central Committee, is suspected of masterminding a lethal 2010 military attack on the South.

Outside the stadium, North Korea was not welcomed as much.

More than 200 anti-Pyongyang protesters, waving South Korean and U.S. flags, banging drums and holding signs like “Killer Kim Yong Chol go to hell,” rallied in streets near the park. They denounced the South Korean government’s decision to allow the visit. There were no major clashes.

That wasn’t all when it came to these odd games. Let’s not forget Russia — or, we should say, “Olympic Athletes from Russia,” the shame-laced moniker they inherited after a doping brouhaha from the 2014 Sochi Games doomed them to a non-flag-carrying Pyeongchang Games.

Two more Russian athletes tested positive in Pyeongchang in the past two weeks. So on Sunday morning, the IOC refused to reinstate the team in time for the closing but left the door open for near-term redemption from what one exasperated committee member called “this entire Russia drama.”

Other Olympic trailblazers: Chloe Kim, American snowboarder extraordinaire. The U.S. women’s hockey team and men’s curlers, both of which claimed gold. And the Russian hockey team, with its nail-biting, overtime victory against Germany.

What’s next for the games? Tokyo in Summer 2020, then Beijing — Summer host in 2008 — staging an encore, this time for a Winter Games. With the completion of the 2018 Pyeongchang Games, that Olympic trinity marks one-third of a noteworthy Olympic run by Asia.

For those keeping score at home: That means four of eight Olympic Games between 2008 and 2022 will have taken place on the Asian continent. Not bad for a region that hosted only four games in the 112 years of modern Olympic history before that — Tokyo in 1964, Sapporo in 1972, Seoul in 1988 and Nagano in 1998. Japan and China will, it’s likely, be highly motivated to outdo South Korea (and each other).

Meantime, the Olympians departing Monday leave behind a Korean Peninsula full of possibility for peace, or at least less hostility.

The steps taken by North and South toward each other this month are formidable but fluid. People are cautiously optimistic: the governor of Gangwon, the border province where Pyeongchang is located, suggested Sunday that the 2021 Asian Games could be co-hosted by both Koreas.

It might not happen. But it could. That could be said about pretty much anything at an Olympic Games, inside the rings and out. Corporate and political and regimented though it may be, that’s what makes it still the best game in town for an athletic thrill every other year — and yes, sometimes a political one, too.