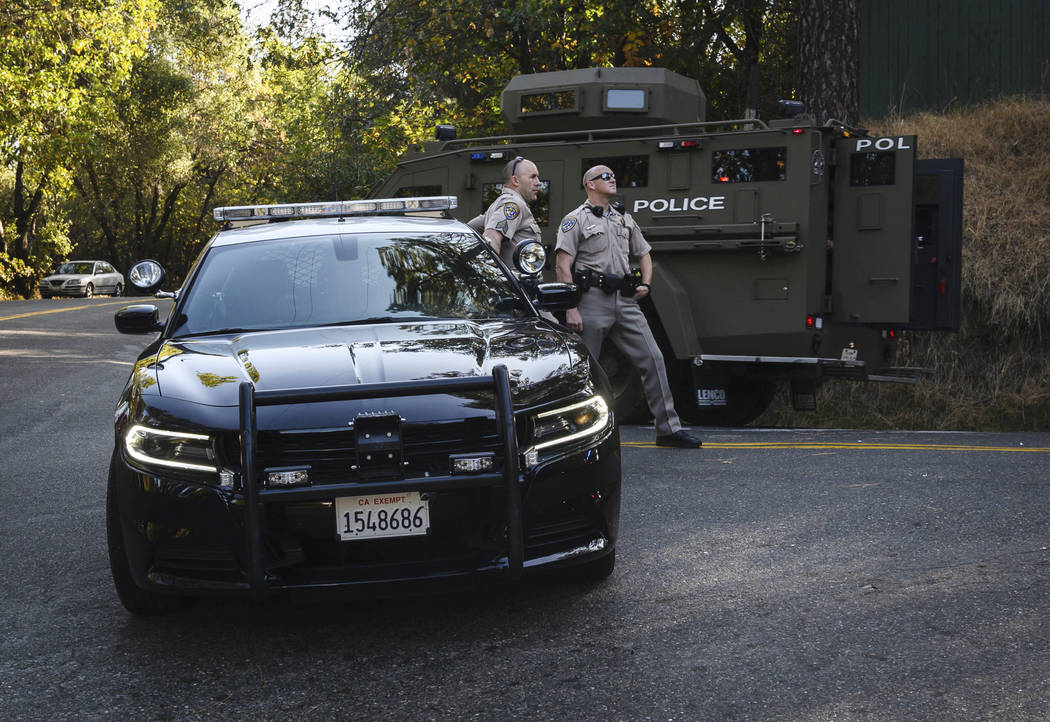 California Highway Patrol officers block off a road where El Dorado County sheriff's deputy Brian Ishmael was killed responding to an early morning call, as an armored vehicle passes by in Somerset, Calif., Wednesday, Oct. 23, 2019. Ishmael was shot to death Wednesday while responding to a call in the rural Sierra Nevada foothills, officials said. The El Dorado County Sheriff's Office said Deputy Brian Ishmael was fatally shot in the community of Somerset and that a ride-along passenger with him was also shot and injured. (Daniel Kim/The Sacramento Bee via AP) 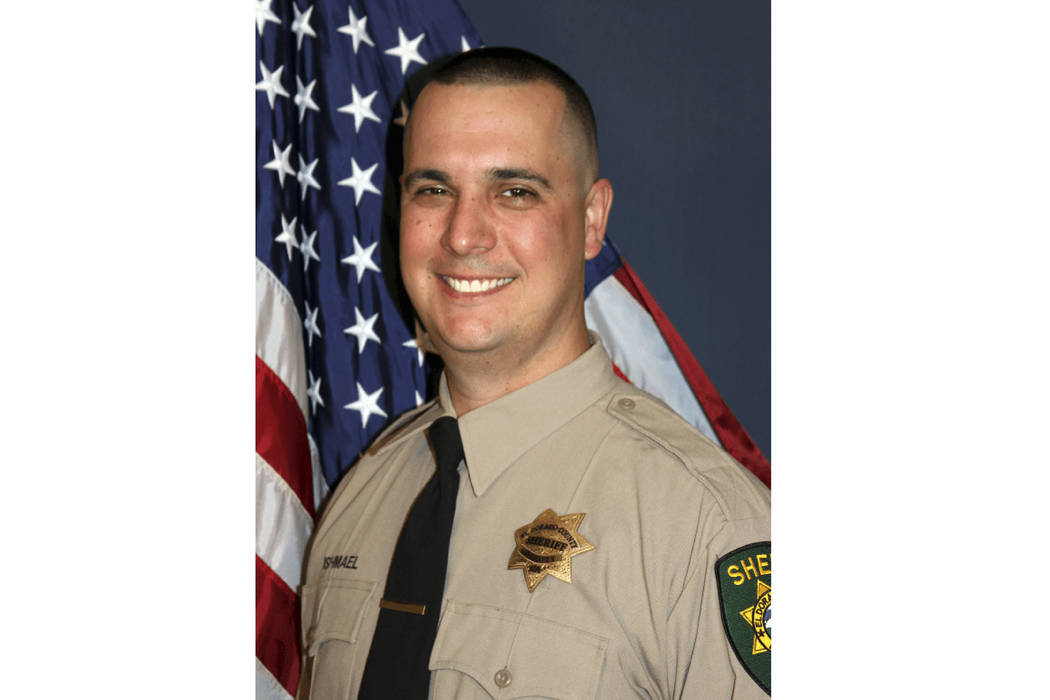 This undated photo provided by the El Dorado County Sheriff's Office shows Deputy Brian Ishmael. The Sheriff's office says Ishmael was fatally shot early Wednesday, Oct. 23, 2019 in the Sierra Nevada Foothills community of Somerset, Calif., and a ride-along passenger with him was injured. An office statement says two men were taken into custody but the scene about 45 miles east of Sacramento remains active. (El Dorado County Sheriff's Office via AP) 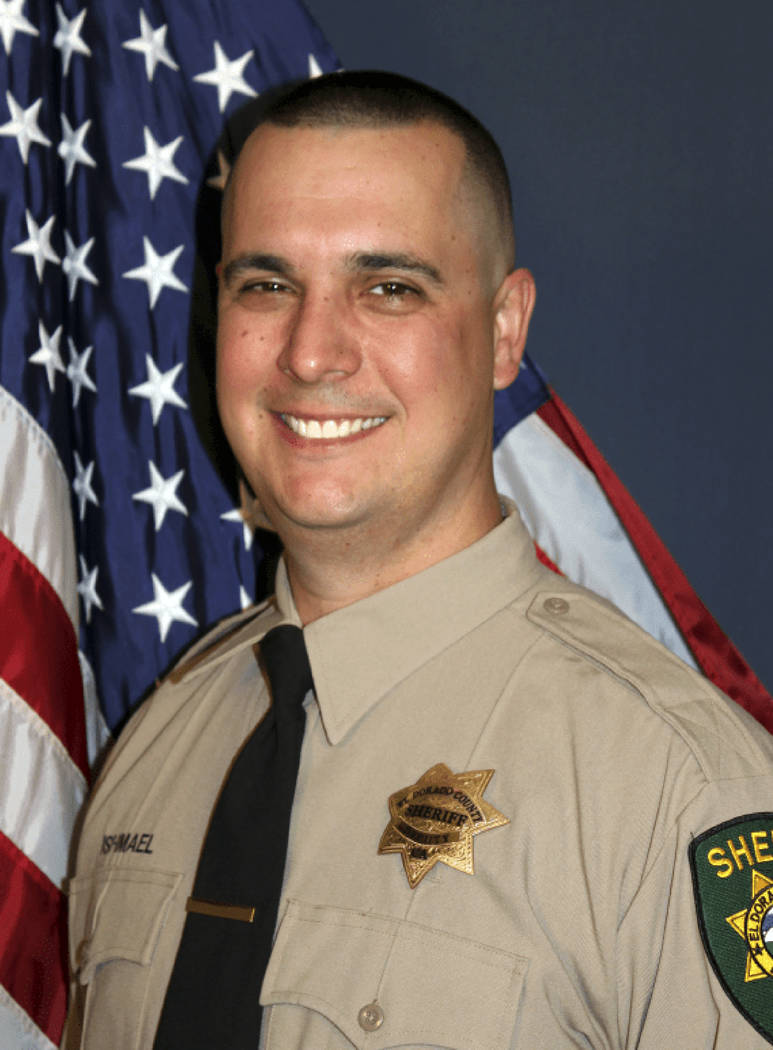 This undated photo provided by the El Dorado County Sheriff's Office shows Deputy Brian Ishmael. The Sheriff's office says Ishmael was fatally shot early Wednesday, Oct. 23, 2019 in the Sierra Nevada Foothills community of Somerset, Calif., and a ride-along passenger with him was injured. An office statement says two men were taken into custody but the scene about 45 miles east of Sacramento remains active. (El Dorado County Sheriff's Office via AP)

SOMERSET, Calif. — Three men have been charged in the fatal shooting of a Northern California sheriff’s deputy who was killed responding to a reported theft from an illegal marijuana growing operation in the rural Sierra Nevada foothills, authorities said Thursday.

A 911 caller reporting the theft did not disclose crucial information — that he had a business arrangement with the supposed thieves — that the El Dorado County sheriff said could have prevented his deputy’s death.

“Had he been truthful with our deputies and the 911 dispatcher, this tragedy would not have occurred,” Sheriff John D’Agostini told reporters.

The caller, Christopher Ross, leased the land to grow 75 plants in the community of Somerset, D’Agostini said. But Ross only told police that people were stealing from his home’s growing operation and did not mention an apparent dispute when he spoke to Deputy Brian Ishmael and an off-duty deputy from San Joaquin County who was accompanying him on a ride-along.

Ishmael was fatally shot as he approached the suspected thieves and the off-duty deputy was wounded, authorities said.

When Ishmael and the off-duty deputy announced their presence at the growing operation, “they were immediately confronted with gunfire,” D’Agostini said. Both returned gunfire.

Ishmael, 37, was struck once in the upper chest, above his bulletproof vest, and once in the foot, the sheriff said. The off-duty deputy, whose name has not been made public, was hit once in the upper thigh and tried to help Ishmael, but he died in minutes, authorities said.

A SWAT team and other officers surrounded the residence and growing operation for hours before they arrested two men.

The suspected gunman, Juan Carlos Vasquez Orozco, underwent surgery for gunshot wounds, D’Agostini said. He was arrested on suspicion of murder and assault with a deadly weapon.

Ramiro Bravo Morales, 22, is charged with being an accessory and is in custody on $250,000 bail. It was not immediately clear if any of the suspects, including Ross, had attorneys who could speak on their behalf.

The arrests were first reported by The Sacramento Bee.

Orozco and Morales are Mexican citizens, D’Agostini said, adding that he did not know if they were in the United States legally.

Ishmael was a four-year veteran of the sheriff’s office and had worked two years for the Placerville Police Department. He is survived by a wife and three daughters.