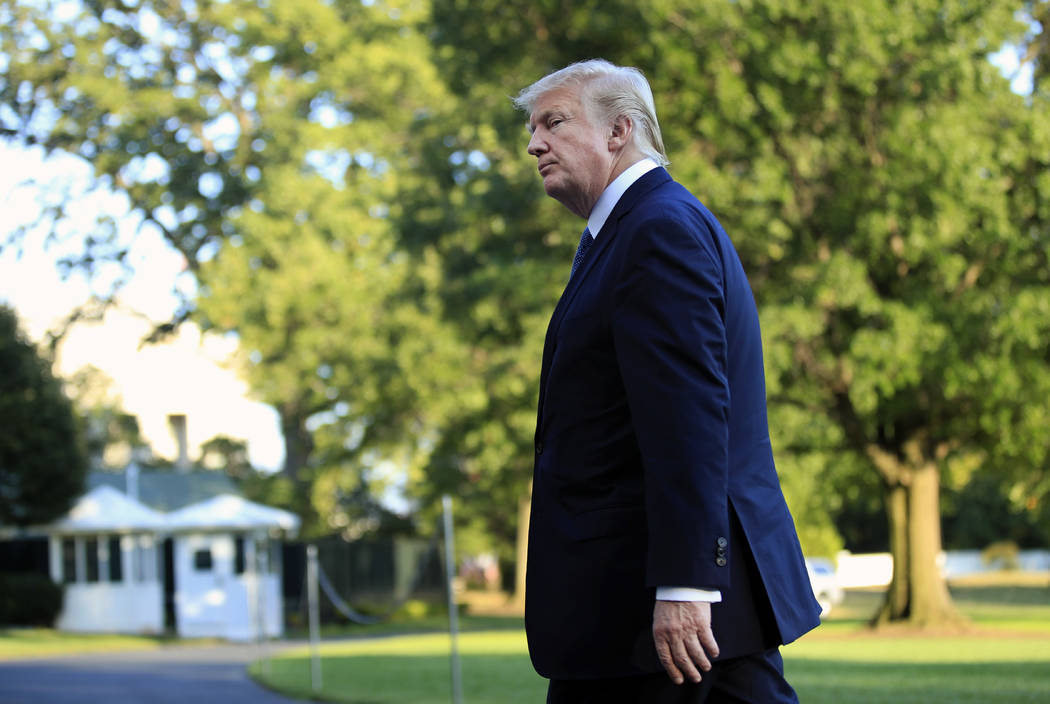 President Donald Trump walks towards the White House in Washington, Sunday, Sept. 24, 2017, after speaking to reporters upon his return. Citizens of eight countries will face new restrictions on entry to the U.S. under a proclamation signed by Trump on Sunday. (AP Photo/Manuel Balce Ceneta) 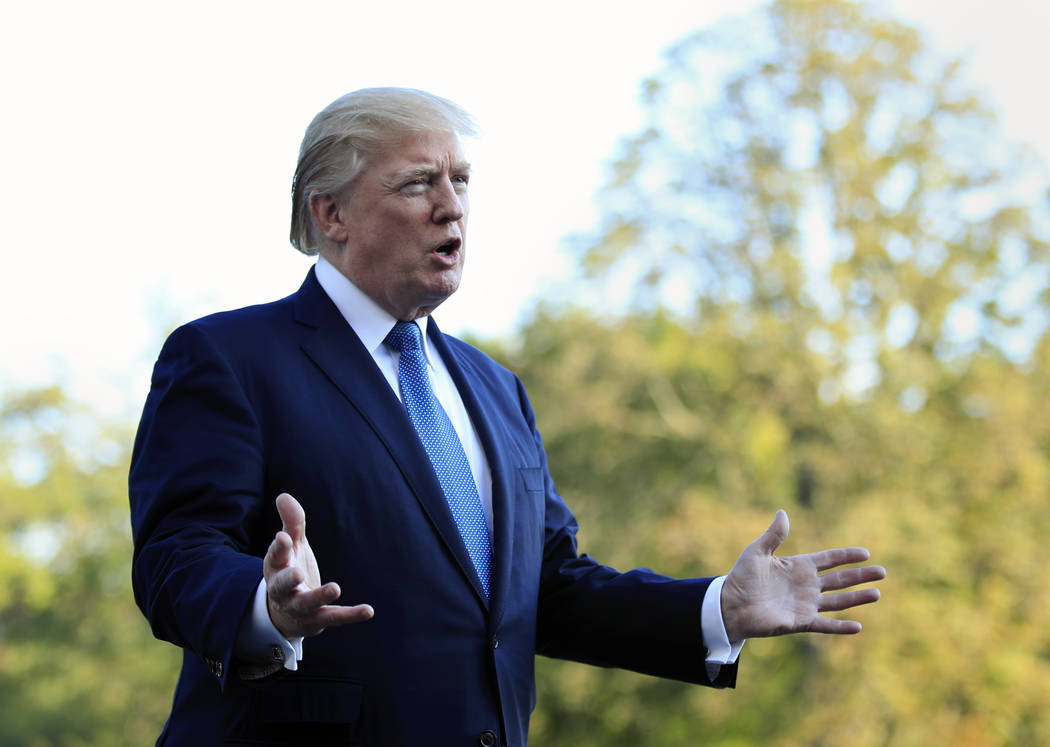 President Donald Trump speaks to reporters upon his return to the White House in Washington, Sunday, Sept. 24, 2017. Citizens of eight countries will face new restrictions on entry to the U.S. under a proclamation signed by Trump on Sunday. (AP Photo/Manuel Balce Ceneta) 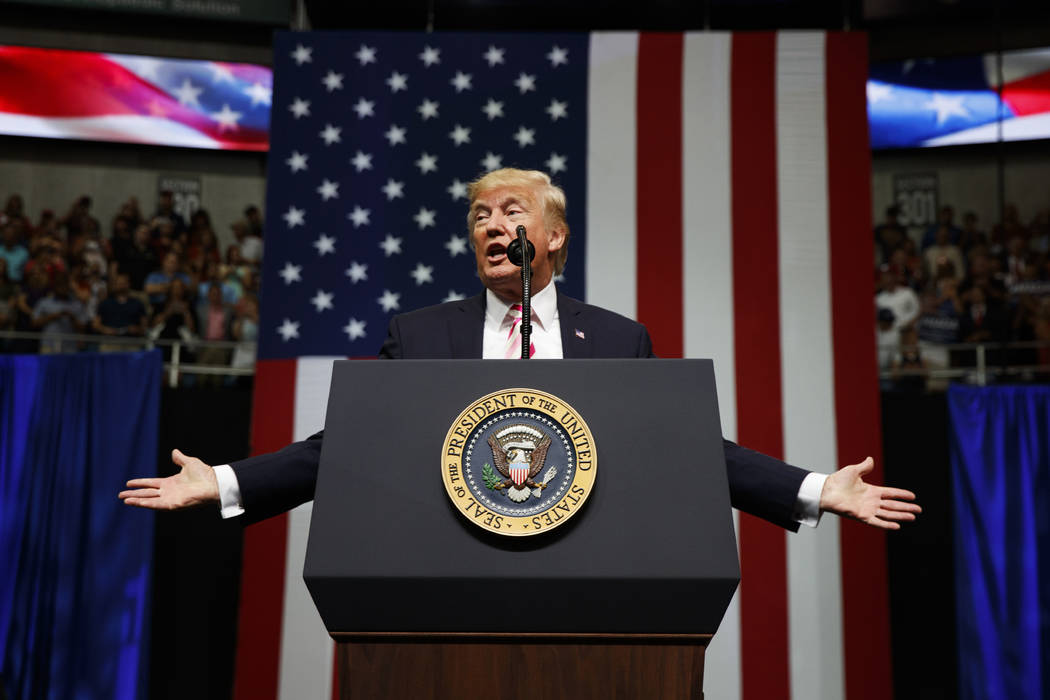 FILE - In this Friday, Sept. 22, 2017, file photo, President Donald Trump speaks at a campaign rally for Sen. Luther Strange, R-Ala., in Huntsville, Ala. Citizens of eight countries will face new restrictions on entry to the U.S. under a proclamation signed by Trump on Sunday, Sept. 24. (AP Photo/Evan Vucci, File)

WASHINGTON — Citizens of eight countries, including North Korea and Venezuela, will face new restrictions on entry to the U.S. under a proclamation signed by President Donald Trump on Sunday that will replace his expiring travel ban.

The new rules, which will impact the citizens of Chad, Iran, Libya, North Korea, Somalia, Syria, Venezuela and Yemen, will go into effect on October 18.

The restrictions range from an indefinite ban on visas for citizens of countries like Syria to more targeted restrictions. A suspension of non-immigrant visas to citizens for Venezuela, for instance, will apply only to certain government officials and their immediate families.

The announcement comes the same day as Trump’s temporary ban on visitors from six Muslim-majority countries was set to expire 90 days after it went into effect. That ban had barred citizens of Iran, Libya, Somalia, Sudan, Syria and Yemen who lack a “credible claim of a bona fide relationship with a person or entity in the United States” from entering the U.S. Only one of those countries, Sudan, will no longer be subject to travel restrictions.

“Making America Safe is my number one priority. We will not admit those into our country we cannot safely vet,” Trump tweeted late Sunday after the new policy was announced.

Making America Safe is my number one priority. We will not admit those into our country we cannot safely vet.https://t.co/KJ886okyfC

Unlike the first iteration of Trump’s travel ban, which sparked chaos at airports across the country and a flurry of legal challenges, officials stressed they had been working for months on the new rules, in collaboration with various agencies and in conversation with foreign governments.

To limit confusion, valid visas would not be revoked as a result of the proclamation. The order also permits, but does not guarantee, case-by-case waivers for citizens of the affected countries who meet certain criteria.

That includes: having previously worked or studied in the U.S. for a lengthy and continuous period of time activity; having previously established “significant contacts” in the U.S.; and having “significant business or professional obligations” in the U.S. Still, officials acknowledged the waiver restrictions were narrower than the exemptions for people with bona fide ties to the United States that he Supreme Court mandated.

The restrictions are targeted at countries that the Department of Homeland Security says fail to share sufficient information with the U.S. or haven’t taken necessary security precautions.

Over the course of the last three months, DHS worked to developed new security baselines, which includes factors such as whether countries issue electronic passports with biometric information, report lost or stolen passports to INTERPOL, and share information about travelers’ terror-related and criminal histories. The U.S. then shared those benchmarks with every country in the world and gave them 50 days to comply.

A total of sixteen countries did not comply with the rules at first, officials said, but half worked with the U.S. to improve their information-sharing and security practices. The remaining eight are now subject to the new restrictions until they are deemed in compliance.

Trump last week called for a “tougher” travel ban after a bomb partially exploded on a London subway.

“The travel ban into the United States should be far larger, tougher and more specific-but stupidly, that would not be politically correct!” he tweeted.

Critics have accused Trump of overstepping his legal authority and violating the U.S. Constitution’s protections against religious bias each time he has ordered new travel restrictions.

And the inclusion of Venezuela and North Korea appeared to be an attempt to block challenges from advocacy groups and others who have called the restrictions a ban on Muslims. Trump during his campaign called for a “total and complete shutdown of Muslims entering the United States.”

But officials argue the measures as necessary to keep Americans safe.

Secretary of State Rex Tillerson said in a statement the president was carrying out his duty to protect the American people. He said the State Department would coordinate with other federal agencies to implement the measures in “an orderly manner” and would” continue to work closely with our allies and partners who share our commitment to national and global security.”

The new policy could also complicate the Supreme Court’s review of the order, which is scheduled for argument next month.