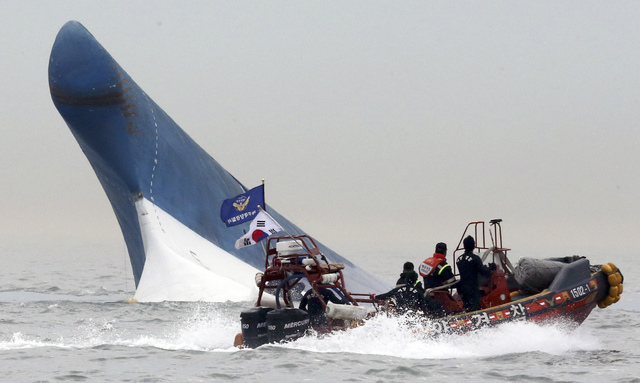 South Korean coast guard officers try to rescue passengers from a ferry sinking in the water off the southern coast near Jindo, south of Seoul, South Korea, Wednesday, April 16, 2014. The ferry carrying 459 people, mostly high school students on an overnight trip to a tourist island, sank off South Korea's southern coast on Wednesday, leaving nearly 300 people missing despite a frantic, hours-long rescue by dozens of ships and helicopters. (AP Photo/Yonhap) 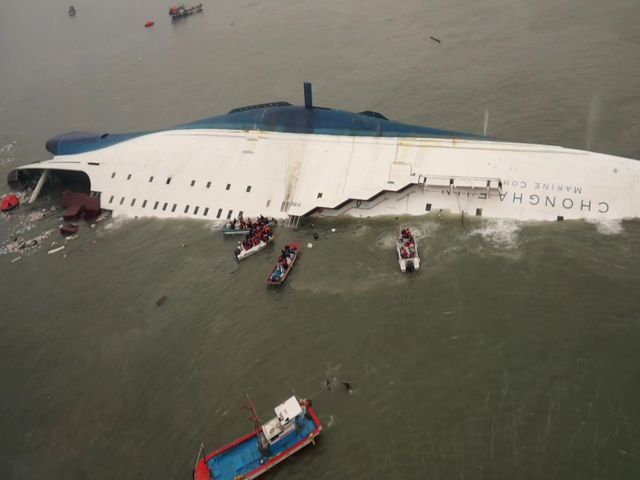 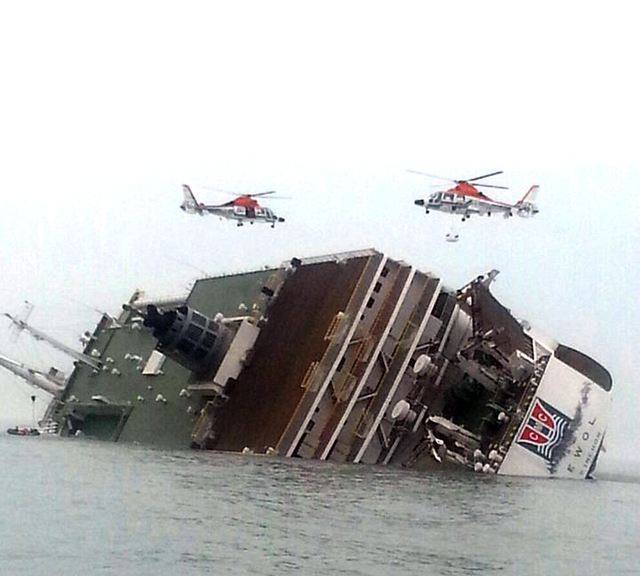 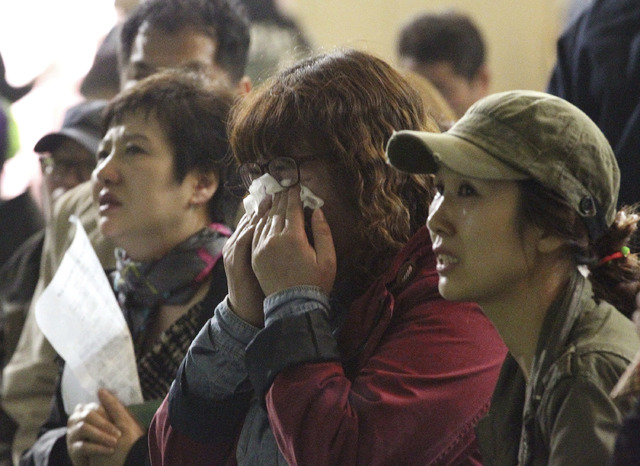 A mother weeps as she and others search for their children's names among a list of survivors rescued from a ferry that sank off the country's southern coast, at Danwon high school in Ansan, South Korea, Wednesday, April 16, 2014. Dozens of boats, helicopters and divers scrambled to rescue more than 450 people, including 325 students on a school trip from the high school, after the ship sank earlier in the day. (AP Photo/Ahn Young-joon) 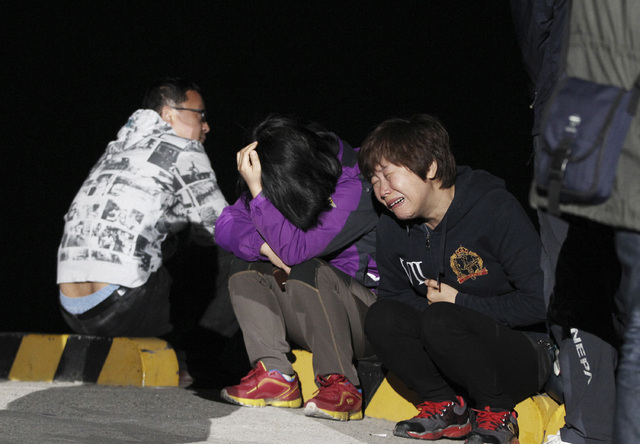 A relative weeps as she waits for missing passengers of a sunken ferry at Jindo port, South Korea, Wednesday, April 16, 2014. The ferry carrying 459 people, mostly high school students on an overnight trip to a tourist island, sank off South Korea's southern coast on Wednesday, leaving nearly 300 people missing despite a frantic, hours-long rescue by dozens of ships and helicopters. (AP Photo/Ahn Young-joon) 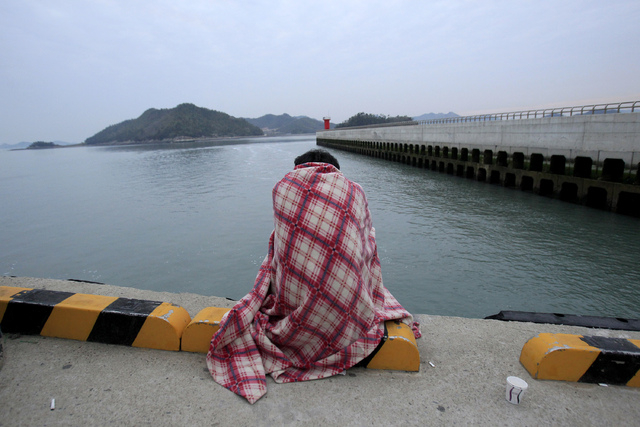 A relative waits for their missing loved one at a port in Jindo, South Korea, Wednesday, April 16, 2014. A ferry carrying 459 people, mostly high school students on an overnight trip to a tourist island, sank off South Korea's southern coast on Wednesday. (AP Photo/Ahn Young-joon) 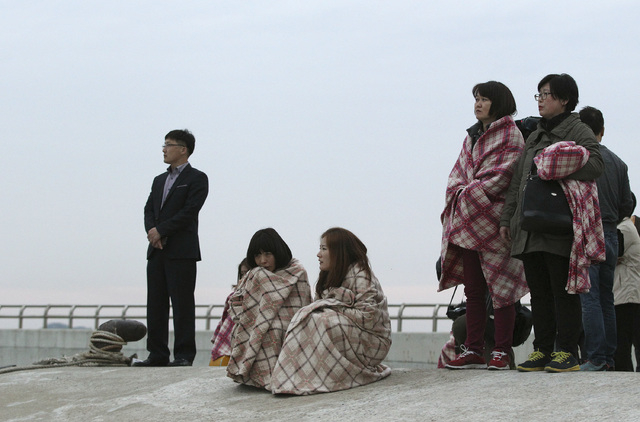 Relatives wait for their missing loved ones at a port in Jindo, South Korea, Wednesday, April 16, 2014. A ferry carrying 459 people, mostly high school students on an overnight trip to a tourist island, sank off South Korea's southern coast on Wednesday. (AP Photo/Ahn Young-joon)

MOKPO, South Korea — Strong currents, rain and bad visibility hampered an increasingly anxious search Thursday for 287 passengers still missing a day after their ferry flipped onto its side and sank in cold waters off the southern coast of South Korea.

Nine people, including five students and two teachers, were confirmed dead, but many expect a sharp jump in that number because of the long period of time the missing have now spent either trapped in the ferry or in the cold seawater. There was also fury among families waiting for word of passengers who were mostly high school students.

There were 475 people aboard, and some of the frantic parents of the 325 student passengers who had been heading to Jeju island for a four-day trip gathered at Danwon High School in Ansan, which is near Seoul, and on Jindo, an island near where the ferry slipped beneath the surface until only the blue-tipped, forward edge of the keel was visible.

Relatives of the three dead students wailed and sobbed as ambulances at a hospital in Mokpo, a city close to the accident site, took the bodies to Ansan. The families, who spent a mostly sleepless night at the hospital, followed the ambulances in their own cars.

The family of one of the victims, 24-year-old teacher Choi Hye-jung, spoke about a young woman who loved to boast of how her students would come to her office and give her hugs.

“She was very active and wanted to be a good leader,” her father, Choi Jae-kyu, 53, said at Mokpo Jung-Ang Hospital while waiting for the arrival of his daughter’s body. Choi’s mother, sitting on a bench at the hospital, sobbed quietly with her head bent down on her knee.

Meanwhile, more than 400 rescuers searched nearby waters overnight and into Thursday morning. Coast guard spokesman Kim Jae-in said that in the next two days, three vessels with cranes onboard would arrive to help with the rescue and salvage the ship. Divers worked round the clock in shifts in an attempt to get inside the vessel, he said. But the current wouldn’t allow them to enter.

Kim said coast guard officials were questioning the captain, but declined to provide details or speculate on the cause of sinking. Kim denied earlier reports by Yonhap news agency that the ferry had turned too swiftly when it was supposed to make a slow turn. He also declined to say whether the ferry had wandered from its usual route.

“I am really sorry and deeply ashamed,” a man identified by broadcaster YTN and Yonhap news agency as the captain, 60-year-old Lee Joon-seok, said in brief comments shown on TV, his face covered with a gray hoodie. “I don’t know what to say.”

Coast guard officers, experts on marine science and other experts and officers planned to gather Thursday in Mokpo to start discussions on how the ship sank.

The Sewol, a 146-meter (480-foot) vessel that can reportedly hold more than 900 people, set sail Tuesday from Incheon, in northwestern South Korea, on an overnight, 14-hour journey to the tourist island of Jeju.

The ferry was three hours from its destination when it sent a distress call after it began listing to one side, according to the Ministry of Security and Public Administration.

Koo Bon-hee, 36, told The Associated Press that many people were trapped inside by windows that were too hard to break.

“The rescue wasn’t done well. We were wearing life jackets. We had time,” Koo, who was on a business trip to Jeju with a co-worker, said from a hospital bed in Mokpo where he was treated for minor injuries. “If people had jumped into the water … they could have been rescued. But we were told not to go out.”

Oh Yong-seok, a 58-year-old crew member who escaped with about a dozen others, including the captain, told AP that rescue efforts were hampered by the ferry’s severe tilt. “We couldn’t even move one step. The slope was too big,” Oh said.

The Sewol’s wreckage is in waters a little north of Byeongpung Island, which is not far from the mainland and about 470 kilometers (290 miles) from Seoul.

The last major ferry disaster in South Korea was in 1993, when 292 people were killed.

The water temperature in the area was about 12 degrees Celsius (54 Fahrenheit), cold enough to cause signs of hypothermia after about 90 minutes of exposure, according to an emergency official who spoke on condition of anonymity because department rules did not allow talking to the media. Officials said the ocean was 37 meters (121 feet) deep in the area.

The survivors — wet, stunned and many without shoes — were brought to Jindo, where medical teams wrapped them in pink blankets and checked for injuries before taking them to a cavernous gymnasium.

As the search dragged on, families of the missing gathered at a nearby dock, some crying and holding each other.

Angry shouts could be heard when Prime Minister Chung Hong-won visited a shelter where relatives of the missing passengers waited for news. Some yelled that the government should have sent more divers to search the wreckage.

Many South Korean high schools organize trips for first- or second-year students, and Jeju is a popular destination. The students on the ferry were in their second year, which would make most of them 16 or 17.