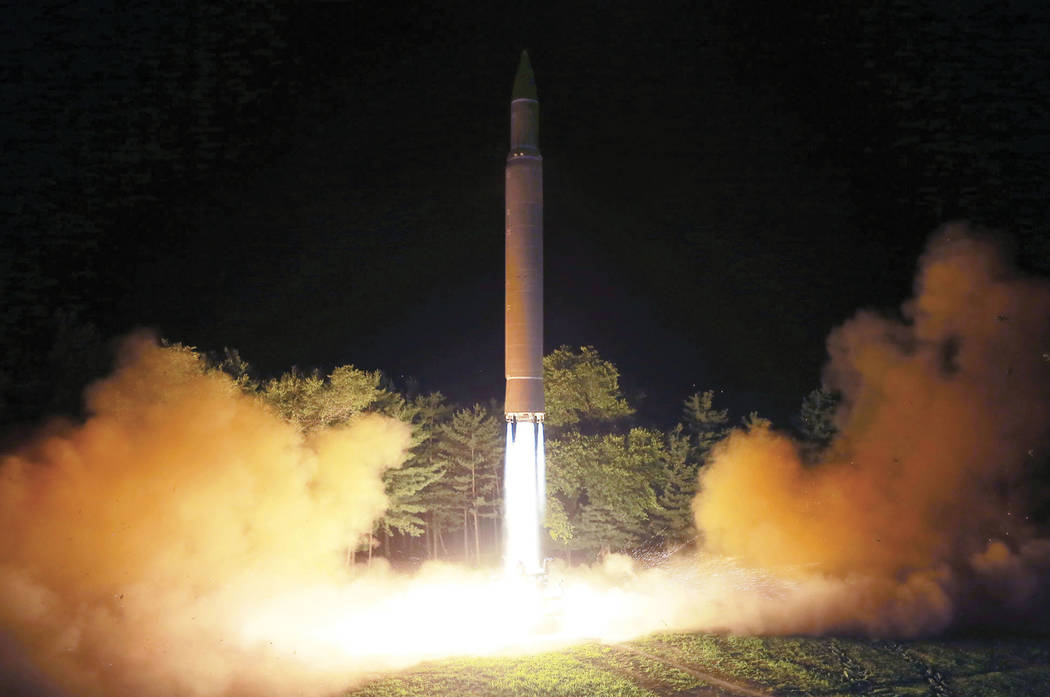 This July 28, 2017, photo distributed by the North Korean government Saturday, July 29, 2017, shows what was said to be the launch of a Hwasong-14 intercontinental ballistic missile at an undisclosed location in North Korea. North Korea after decades of effort has a missile potentially capable of reaching the continental United States, but analysts say Pyongyang has yet to show the ICBM can inflict serious damage once it gets there. (Korean Central News Agency/File, Korea News Service via AP) 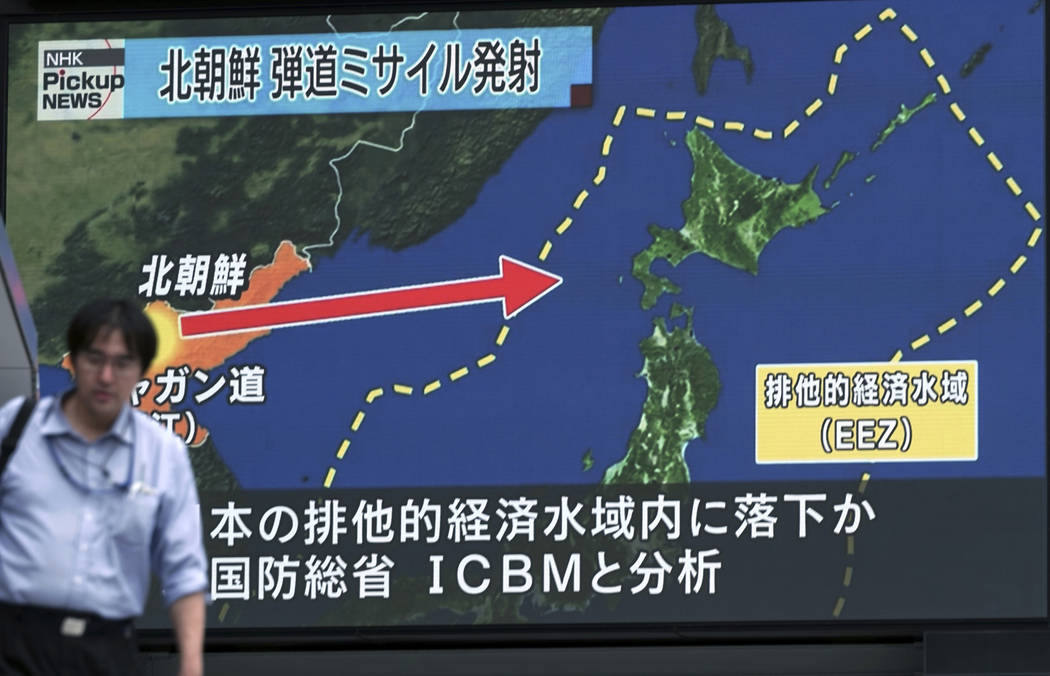 A man walks in front of a public TV screen broadcasting news of North Korea's test-firing of its second intercontinental ballistic missile July 29, 2017, in Tokyo, Japan. North Korea after decades of effort has a missile potentially capable of reaching the continental United States, but analysts say Pyongyang has yet to show the ICBM can inflict serious damage once it gets there. The ticker above reads: "North Korea fired ICBM missile." (Eugene Hoshiko/File, AP)

SEOUL, South Korea — North Korea after decades of effort has a missile potentially capable of reaching the continental United States, but analysts say Pyongyang has yet to show the ICBM can inflict serious damage once it gets there.

U.S. and South Korean experts on Tuesday said Japanese video footage capturing the Hwasong-14’s re-entry vehicle shortly before it crashed into the sea suggests it failed to survive the extreme heat and pressure after re-entering the Earth’s atmosphere following its launch from northern North Korea on Friday.

But the apparent failure likely means the North will conduct more flight tests of the Hwasong-14 missile to ensure the warhead could survive the re-entry from space and hit its intended target, the analysts said.

The Hwasong-14 ICBM, which was first tested on July 4, follows decades of effort by North Korea to obtain a nuclear deterrent against the United States. Analysis of the flight data from Hwasong-14’s second test has suggested that more of the U.S. mainland, including Los Angeles and Chicago, is now in range of Pyongyang’s weapons.

However, whether North Korea can arm the missile with a nuclear warhead and protect it throughout the flight are different questions entirely.

After analyzing video from a rooftop camera operated by Japan’s NHK television on the northern island of Hokkaido, U.S. missile expert Michael Elleman concluded that Hwasong-14’s re-entry vehicle “disintegrated” before it landed at sea.

“In short, a reasonable conclusion based on the video evidence is that the Hwasong-14’s re-entry vehicle did not survive during its second test,” said Elleman, an expert with the International Institute for Strategic Studies. “If this assessment accurately reflects reality, North Korea’s engineers have yet to master re-entry technologies and more work remains before Kim Jong Un has an ICBM capable of striking the American mainland.”

Granted, it’s impossible to know how the warhead would have performed if North Korea had launched the missile for real. Both ICBMs were test-launched at highly lofted angles to reduce the range and avoid neighboring countries, and the near-vertical flight paths meant the re-entry vehicles endured harsher conditions during their descents.

But Kim Dong-yub, a defense analyst at the Institute for Far Eastern Studies at Kyungnam University in Seoul, said it’s obvious North Korea has yet to reach where it wants to be with re-entry technologies.

While North Korea has declared that the Hwasong-14’s latest launch confirmed important features of the missile, such as its range and the warhead’s atmospheric re-entry, it also described the rocket as “landing in the target waters in the open sea.” That probably wasn’t an ideal outcome for North Korean engineers because nuclear warheads are usually designed to detonate at lower altitudes shortly before impact, Kim said.

“Considering the cost and efforts they put into tests, North Korea likely would have tried to detonate the warhead properly; they apparently failed this time, but could focus on this aspect in future tests,” Kim said.

Mastering warhead re-entries would be one of the most critical military milestones the North has left, along with developing a submarine-launched ballistic missile system and solid-fuel ICBMs, Kim said.