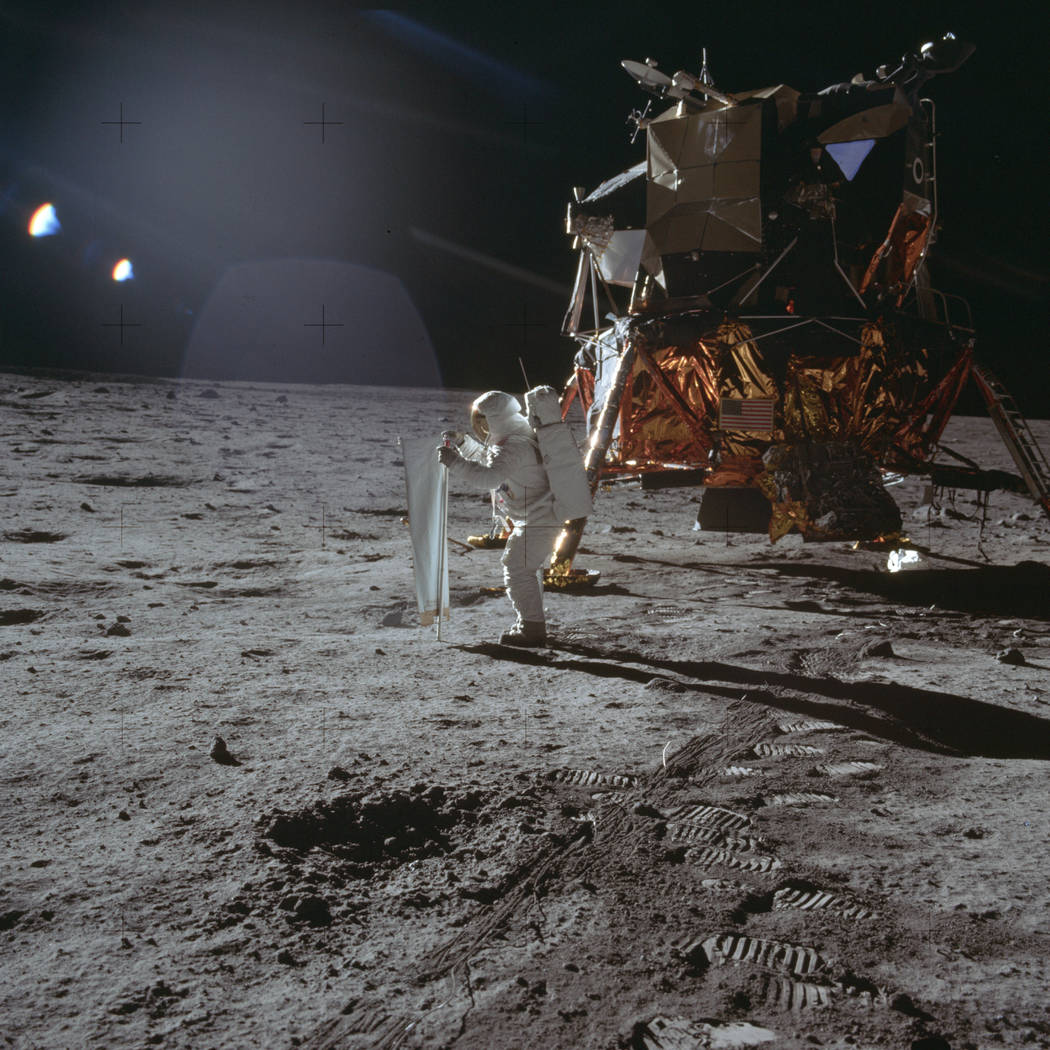 In this July 20, 1969 photo made available by NASA, Apollo 11 astronaut Buzz Aldrin works on a solar wind experiment device on the surface of the moon. (Neil Armstrong/NASA via AP) 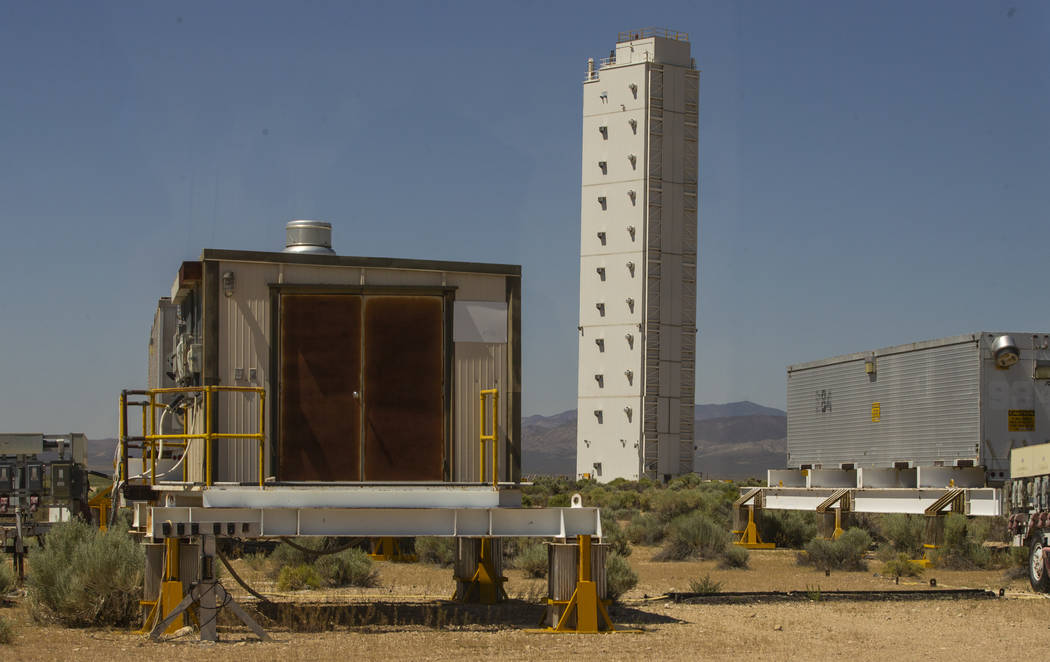 Power stations and other equipment still remain at the Icecap modular tower site within the Nevada National Security Test Site near places the Apollo 11 astronauts visited during training for several days in preparation for their moon mission Thursday, June 20, 2019, in Mercury, Nevada. Icecap was one day away from being excavated before the nuclear testing moratorium was placed in 1992. (L.E. Baskow/Las Vegas Review-Journal) @Left_Eye_Images 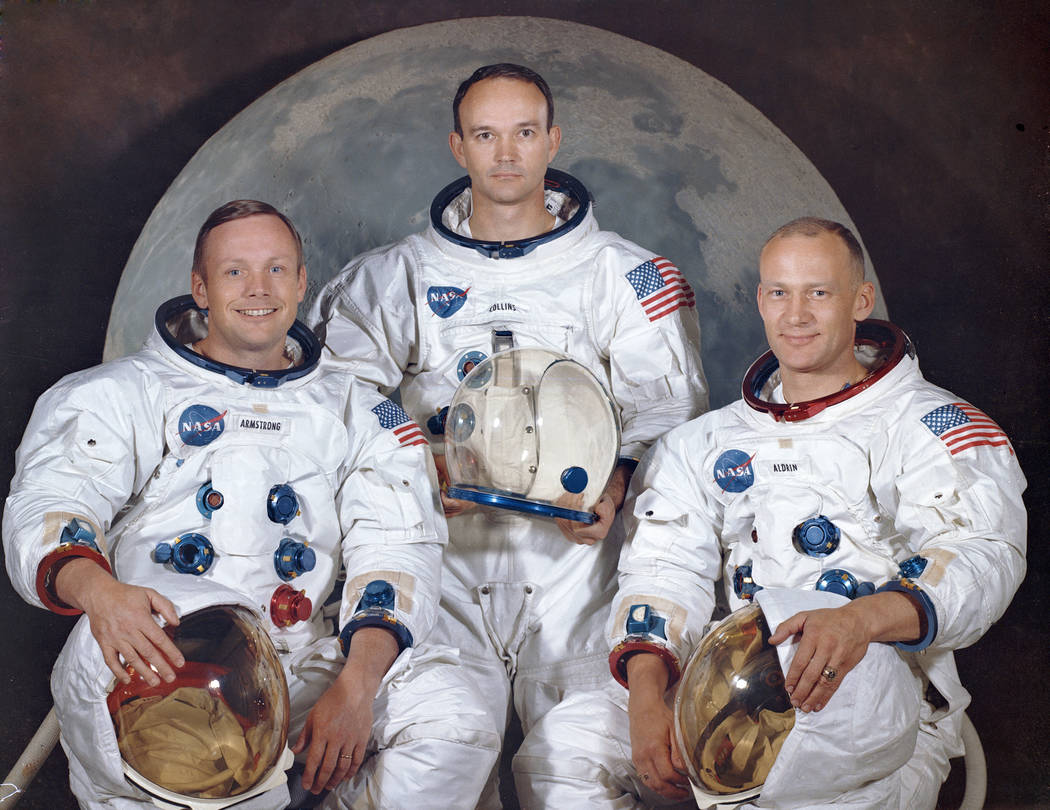 ADVANCE FOR USE SATURDAY, JULY 13, 2019 AND THEREAFTER- This March 30, 1969 photo made available by NASA shows the crew of the Apollo 11, from left, Neil Armstrong, commander; Michael Collins, module pilot; Edwin E. "Buzz" Aldrin, lunar module pilot. Apollo 11 was the first manned mission to the surface of the moon. (NASA via AP)

When Neil Armstrong stood in the Sea of Tranquility and compared the lunar landscape to “the high desert of the United States,” he may have been remembering his training in Nevada.

In February 1965, Armstrong and his fellow Apollo 11 crew members spent three days exploring the man-made craters at what was then known as the Nevada Test Site, north of Las Vegas.

Armstrong, Buzz Aldrin, Michael Collins and four other astronauts visited several parts of the nuclear proving ground as geologists taught them the differences between volcanic features and impact craters.

Five more astronauts repeated the tour a week later, followed by two more the week after that, according to NASA historical records and news accounts from the time.

The field trips were part of a larger effort by NASA and the U.S. Geological Survey to prepare the men for what they might see — and what they should look for — once they set foot on the moon.

“They had these guys going all over parts of Nevada, New Mexico and Arizona,” said aerospace historian Peter Merlin. “The more training you get in advance, the better you can do your job when you get to the lunar surface.”

So what made Southern Nevada such a good place for so-called astrogeology training?

“For one thing, they had craters to work with at the test site,” Merlin said.

The Sedan Crater was less than three years old when Armstrong and company walked around the top of it.

A 104-kiloton underground blast created the giant hole — 1,280 feet wide and 320 feet deep — on July 6, 1962, as part of a test to see if nuclear weapons could be used for canal excavation and other peaceful purposes.

The new geographic feature 110 miles northwest of Las Vegas closely resembled some of the impact scars the astronauts planned to study on the moon, “so Sedan was one of their first stops where they did some observations and geophysical studies around the lip of the crater,” said Kirsten Kellogg, spokeswoman for what is now known as the Nevada National Security Site.

The tour was chronicled in the test site newsletter from Feb. 28, 1965, which included photos of the astronauts and their geology instructors examining rocks at Sedan Crater and lining up to eat at one of the cafeterias on the site.

“The astronauts’ visit to the Nevada Test Site was a hard field trip — certainly not a glamour-vacation jaunt,” the article explained. “The spacemen reported the lunch at Area 12 was good, and that a substantial dinner that night in the Steak House (in the test site town of Mercury) was welcome after a hard day in the field.”

Of the 15 astronauts who toured the test site in 1965, eight later traveled to the moon and five left their footprints on its surface.

But four of the men didn’t live to see the first moon landing.

Less than a year after their test site visit, astronauts Elliot See and Charles Bassett II were killed when their T-38 training jet crashed in St. Louis. Roger Chaffee, who toured the test site in March 1965, died alongside Virgil “Gus” Grissom and Ed White in the Apollo 1 capsule fire in January 1967. And Clifton Williams Jr. died in a T-38 crash in Florida in October 1967, two years after his training in Nevada.

After Armstrong and Aldrin’s historic landing 50 years ago, NASA returned to Nevada for 10 more training sessions on and around the test site, including field trips to Lunar Crater outside the Nye County seat of Tonopah and the McCullough Mountains between Henderson and Boulder City.

Dressed in blue jeans and cowboy hats and wearing bulky white backpacks like the ones they would carry on the moon, the crews of Apollo 14, 15, 16 and 17 practiced geologic survey work, tried out some of the tools they would need to gather samples and tooled around the desert in a lunar rover training vehicle.

‘Stark beauty all its own’

Longtime test site worker Ernie Williams got to spend the day with some of the astronauts during one of those later visits.

“When I came home and said something to my wife, she said, ‘You’re history!’” he recalled during a tour in June at Sedan Crater.

Williams said he got to watch the astronauts try out a version of the rover they would drive during the final two Apollo missions. “They took the steel tires off and put rubber tires on it,” the 88-year-old said. “Very interesting people. They were intelligent, and they were very enthusiastic about going to the moon.”

One of the men gave Williams a souvenir he still proudly shows off: an aluminum coin commemorating Apollo 11.

The test site left an impression on the astronauts as well.

Both John Young on Apollo 16 and Harrison “Jack” Schmitt on Apollo 17 made references to Nevada’s nuclear craters during their time on the lunar surface.

“I think it was actually helpful, because it gave them an idea of what they were going to see and what to expect,” said Merlin, the historian, who has written books on the test site and Area 51. “So they weren’t just gawking at the scenery.”

Within 10 minutes of his one giant leap for mankind on July 20, 1969, Armstrong was already comparing the moon to some of the places where he trained in Nevada and elsewhere.

“It has a stark beauty all its own,” the first man on the moon said in a transmission to Mission Control. “It’s like much of the high desert of the United States. It’s different, but it’s very pretty out here.”