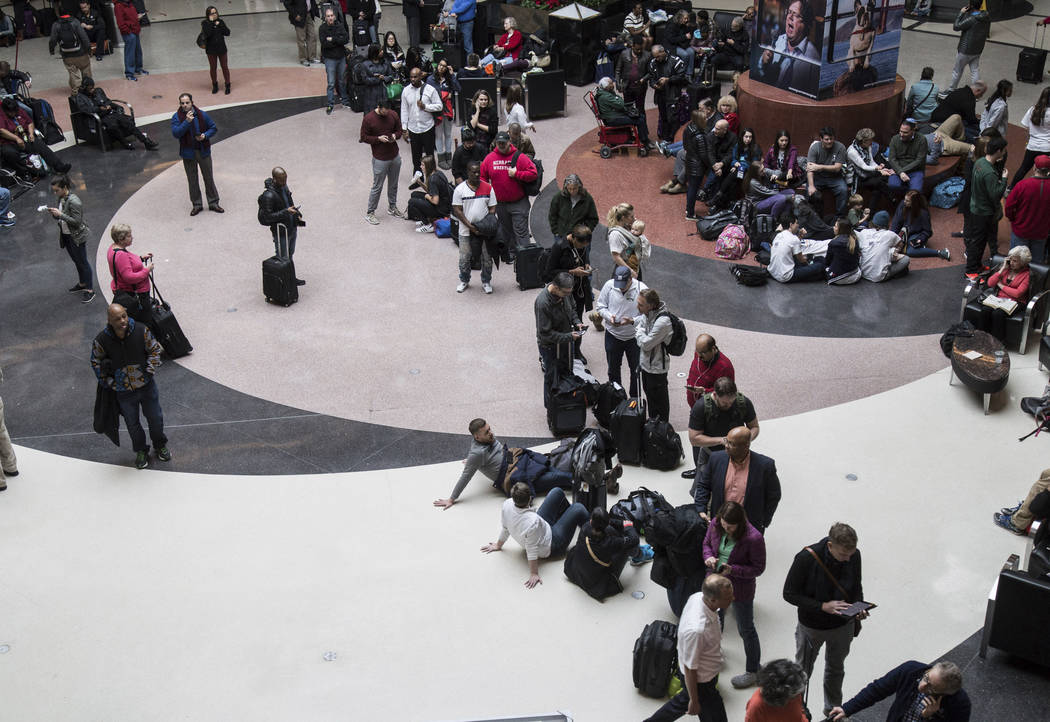 Long lines form at Hartsfield-Jackson International Airport after a power outage, Sunday, Dec. 17, 2017, in Atlanta. A sudden power outage at the Hartsfield-Jackson Atlanta International Airport on Sunday grounded scores of flights and passengers during one of the busiest travel times of the year. (Steve Schaefer/Atlanta Journal-Constitution via AP) 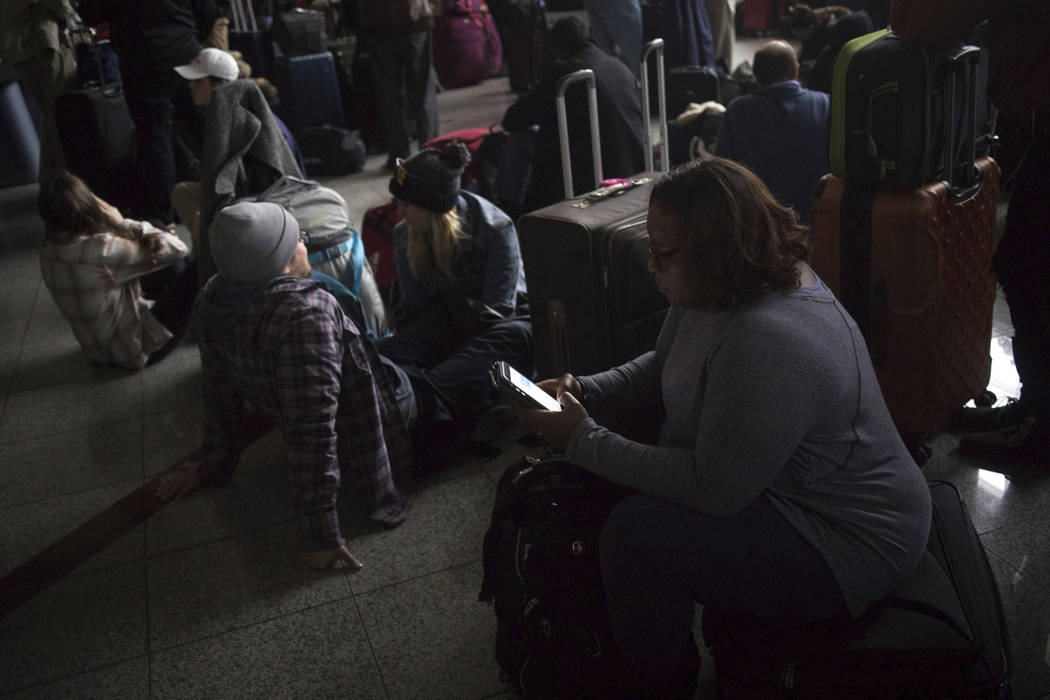 Passengers wait for the lights to come back on at Hartsfield-Jackson International Airport Sunday, Dec. 17, 2017. Authorities say a power outage at the Hartsfield-Jackson Atlanta International Airport has disrupted ingoing and outgoing flights. Airport spokesman Reese McCraine says the outage occurred early Sunday afternoon. He says all airport operations are being affected and that outgoing flights were halted. (Steve Schaefer/Atlanta Journal-Constitution via AP) 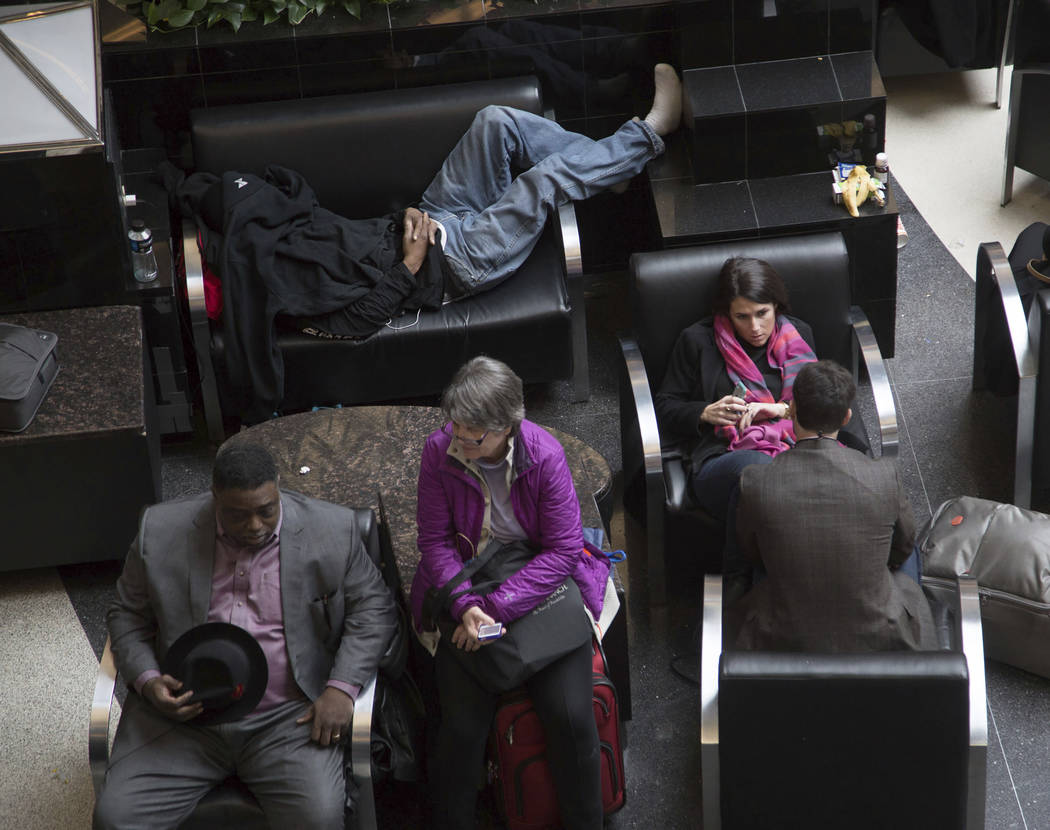 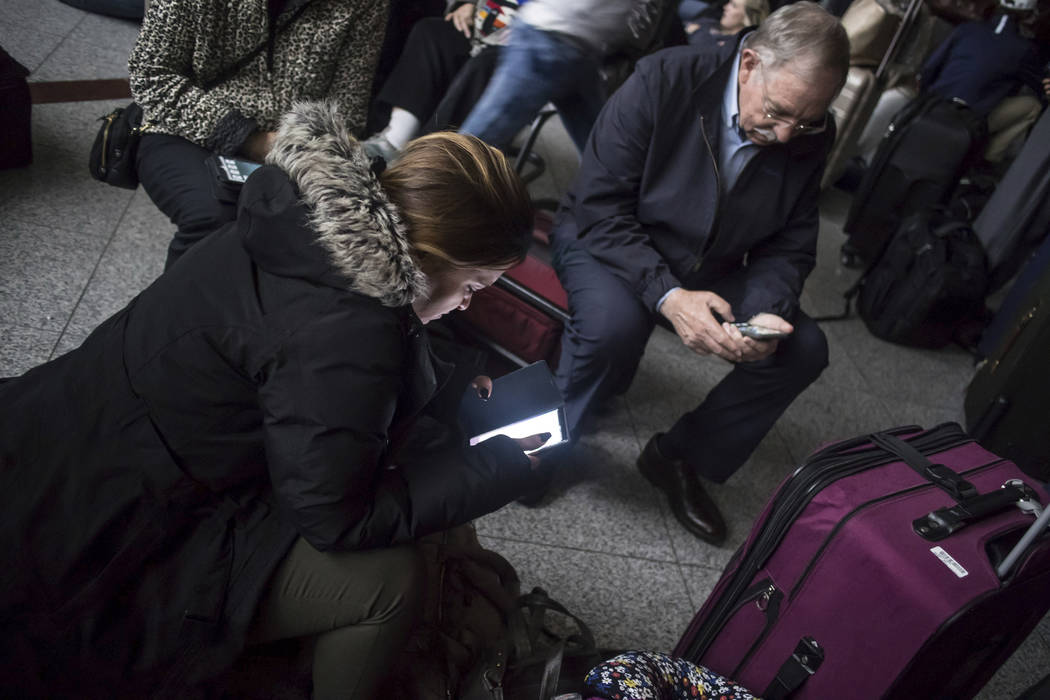 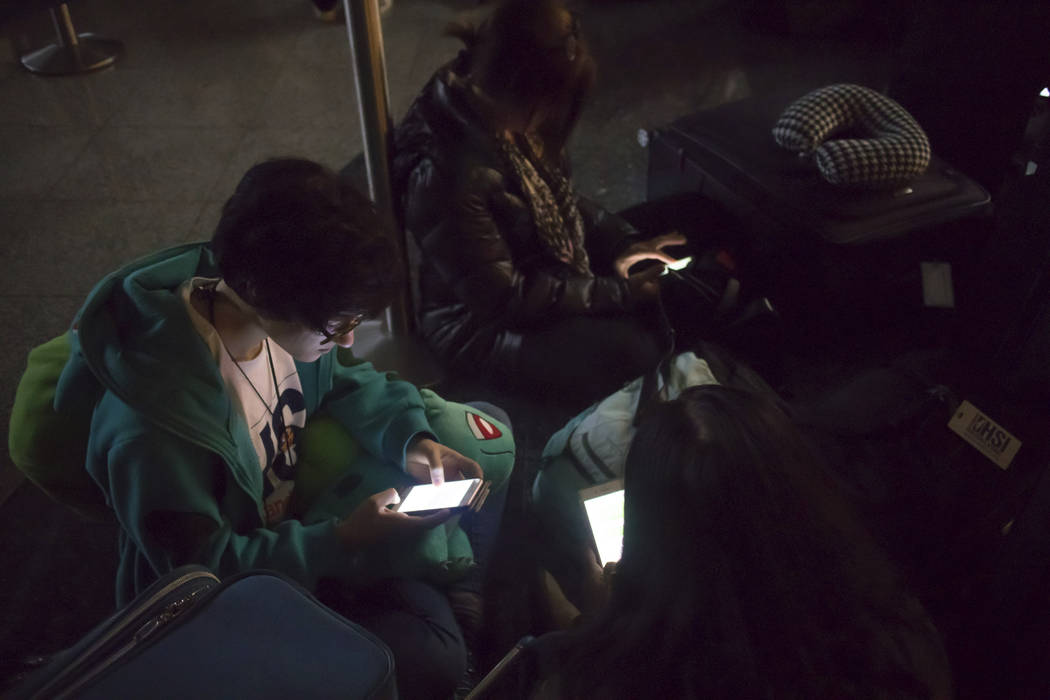 Isabelle Jacobs waits for her flight to New York in a dark terminal at Hartsfield-Jackson International Airport Sunday, Dec. 17, 2017. Authorities say a power outage at the Hartsfield-Jackson Atlanta International Airport has disrupted ingoing and outgoing flights. Airport spokesman Reese McCraine says the outage occurred early Sunday afternoon. He says all airport operations are being affected and that outgoing flights were halted. (Steve Schaefer/Atlanta Journal-Constitution via AP)

ATLANTA — Minutes after its midnight deadline to get the electricity back on at the world’s busiest airport, Georgia Power announced early Monday that power had been fully restored to Hartsfield-Jackson Atlanta International, where more than 1,000 flights were grounded just days before the start of the Christmas travel rush.

A sudden power outage caused by a fire in an underground electrical facility brought the airport to a standstill.

Georgia Power said on its Twitter page that “Power has been restored on all concourses. 5,000+ meals are being delivered to passengers. Trains will be operational soon.”

Passengers at the airport were left in the dark when the lights went out at around 1 p.m. The outage halted all outgoing flights, and arriving planes were held on the ground at their point of departure. International flights were being diverted, officials said.

Mayor Kasim Reed tweeted Sunday night that all passengers had been safely deplaned.

The City of Atlanta said on its Twitter page that it would provide shuttle service to the Georgia Convention Center for travelers in need of a place to stay and Chick-fil-A would be provided.

Delta passenger Emilia Duca, 32, was on her way to Wisconsin from Bogota, Colombia, when she got stuck in Atlanta. She said police made passengers who were in the baggage-claim area move to a higher floor. She said restaurants and shops were closed. Vending machines weren’t working.

“A lot of people are arriving, and no one is going out. No one is saying anything official. We are stuck here,” she said. “It’s a nightmare.”

Adding to the nightmare are what some passengers said was a lack of information from airport officials and help from first responders to get the disabled and the elderly through the airport without the use of escalators and elevators.

“They had these elderly people, handicapped people lined up in wheelchairs, said stranded passenger Rutia Curry. “The people were helpless, they can’t get down the stairs, it was just a nightmare.”

Passenger James Beatty said there was no real method for evacuation.

“I mean there was 40 or 50 people per the terminal area that were confined to wheelchairs and some that couldn’t get through the airport very well, some of them actually couldn’t walk and there was no plan at all to get them out of here without any power.”

Beatty said passengers carried those who used wheelchairs down stairs.

Delta, with its biggest hub operation in Atlanta, will be hardest hit. By evening, Delta had already cancelled almost 900 Sunday flights and another 300 on Monday, nearly all of them in Atlanta, according to tracking service FlightAware.com.

Delta customers flying to or from Atlanta can make a one-time change to travel plans without incurring a $200 change fee. The airline also encouraged travelers not to pick up their bags on Monday because of anticipated congestion at the airport.

Robert Mann, an aviation consultant and former American Airlines executive, said it likely will be Tuesday before Delta’s operations in Atlanta return to normal, and for passengers “it could be most of the week” because there aren’t many open seats on other flights in the last week before Christmas.

“Tomorrow is going to be a long and difficult day for everybody,” Mann said.

One bit of good news, according to Mann: Delta has more spare planes and available crews in Atlanta than anywhere else, which will help it to recover.

Still, when flights at Atlanta were grounded for most of one day last spring, it took Delta five days — and about 4,000 cancelled flights — before it fully recovered.

Like Sunday’s outage, that April storm hit Delta’s largest hub at a busy travel time when there weren’t many empty seats to accommodate customers from cancelled flights. At the time, CEO Ed Bastian vowed that Delta would make “significant improvements” to its system for scheduling and tracking aircraft crews to recover more quickly from disruptions.

Other airlines also canceled flights for the rest of Sunday. American Airlines canceled 24 departures and an equal number of arrivals, said spokesman Ross Feinstein. The airline also diverted three planes that were headed to Atlanta when the outage struck, sending them instead to Dallas, Nashville and back to Philadelphia.

The FAA said it would staff the airport control tower throughout the night so that it can handle flights once they resume. The FAA said the tower could operate normally but flights were affected because airport equipment in the terminals was not working.

According to a Georgia Power statement, a fire in an underground electrical facility may have been responsible for the outage. The cause of the fire was not known.

“No personnel or passengers were in danger at any time,” the statement said.

No areas outside of the airport were affected by the power loss. The utility said that there are “many redundant systems in place” to ensure the power supply to the airport and that such outages at the airport “are very rare.”

That wasn’t enough to comfort Jeff Smith, 46, of Pittsburgh, who ended up stuck in a plane on the tarmac for three hours after it landed.

“This is the worst experience I’ve ever had at an airport,” he said.

Sara Melillo, who was traveling to Pittsburgh from Kenya, where she lives with her husband, Greg Presto, to spend Christmas with his family were stuck on the tarmac for six hours. The couple had made stops in Nairobi and Amsterdam and landed shortly after the lights went out in Atlanta.

She said the pilot didn’t have a lot of information for the travelers but the plane had air conditioning and attendants offered water and juice a few times. She described the Delta terminal as “big chaos” with not enough customer service for the hundreds of people trying to find a flight to their next destination and a place to sleep for the night.

With her new boarding pass handwritten and her bags still stuck on a plane, Melillo was hopeful that she and her husband would be able to get a flight in the morning to Pittsburgh, she said as she waited for an Uber to take them to a hotel.

Airport workers were distributing bottled water, and Dunkin’ Donuts was giving out doughnuts.

Officer Lisa Bender of the Atlanta Police Department said officers were at the airport to help with crowd control and managing traffic around the airport.

At Southwest Airlines, about 70 Atlanta departures out of 120 scheduled for Sunday were cancelled, an airline spokesman said in an email. United Airlines and JetBlue Airways were among carriers reporting delays or cancellations.

Mozell Smith, 58, of Atlanta arrived at the airport hours after the electricity went off. He was headed to Las Vegas with a sister and a friend.

“This is terrible. I wish someone would’ve given us a heads-up before we got to the airport,” he said. “I wish there would have been better communication.”

American Airlines reported only a handful of diversions and cancellations because the carrier does not use Atlanta as a hub, airline spokeswoman Alexis Aran Coello.

Hartsfield-Jackson, which serves 104 million passengers a year, is the world’s busiest airport, a distinction it has held since 1998.

The airport serves an average of 275,000 passengers daily, according to its website. Nearly 2,500 planes arrive and depart each day.