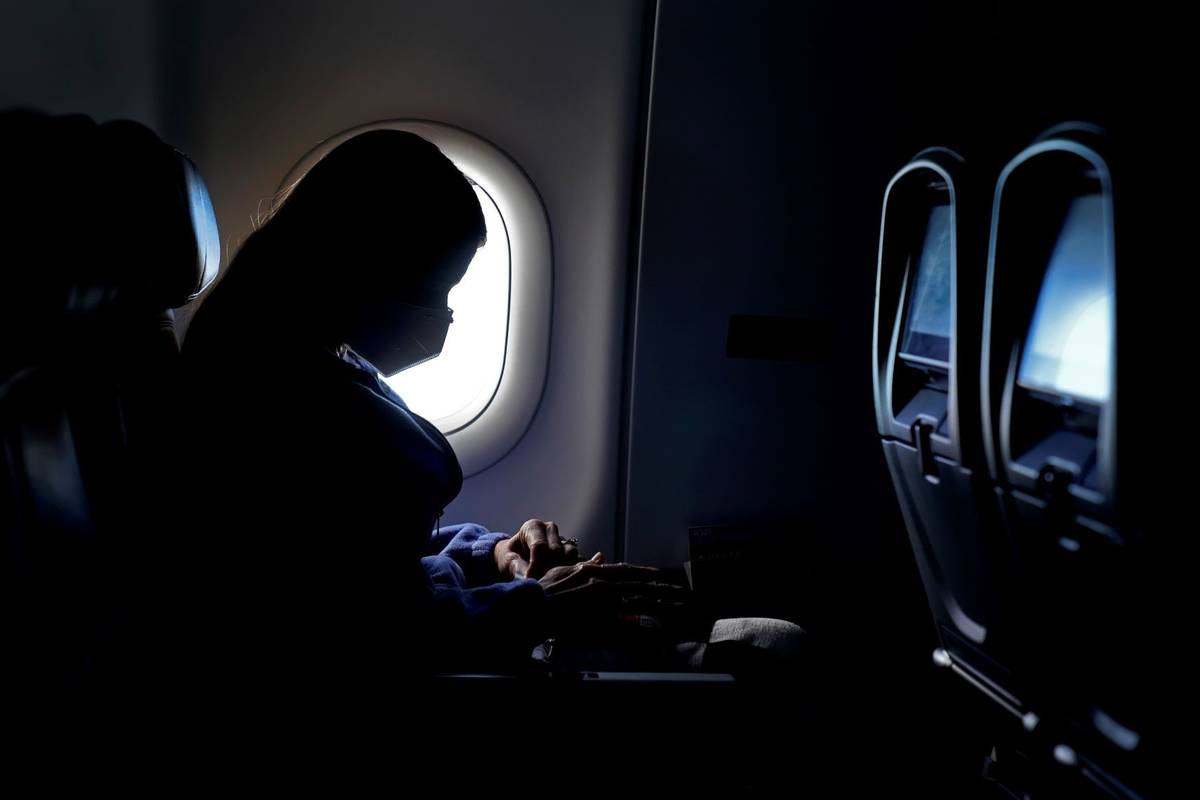 A passenger wears a face mask she travels on a Delta Air Lines flight after taking off from Hartsfield-Jackson International Airport in Atlanta in February 2021. (AP Photo/Charlie Riedel)

Air travel can be difficult in the best of times, with cramped planes, screaming babies, flight delays and short tempers.

Throw in a pandemic, and the anxiety level can rise quickly.

That has led to confrontations with flight attendants and other unruly behavior, including occasional fights that get captured and replayed endlessly on social media.

Airlines have reported about 3,000 cases of disruptive passengers since Jan. 1, according to a spokesman for the Federal Aviation Administration, which began tracking it this year. About 2,300 of those incidents involved passengers who refused to obey the federal requirement to wear a face mask.

Over the past decade, the FAA investigated about 140 cases a year for possible enforcement actions such as fines. This year, it was nearly 400 by late May.

Things have gotten so bad that the airlines and unions for flight attendants and pilots sent a letter to the U.S. Justice Department on Monday urging “that more be done to deter egregious behavior.”

“The federal government should send a strong and consistent message through criminal enforcement that compliance with federal law and upholding aviation safety are of paramount importance,” the letter said, noting that the law calls for up to 20 years imprisonment for passengers who intimidate or interfere with crew members.

Trade group Airlines for America sent a separate letter to the Federal Aviation Administration acknowledging that the “vast majority of passengers” comply with the rules but “unfortunately, we continue to see onboard behavior deteriorating into heinous acts, including assaults, threats and intimidation of crewmembers that directly interfere with the performance of crewmember duties and jeopardize the safety and security of everyone onboard the aircraft.”

The FAA announced a “zero-tolerance” policy against disruptive behavior on flights back in January. The agency is attempting to levy fines that can top $30,000 against more than 50 passengers and has identified more than 400 other cases for possible enforcement.

U.S. airlines have banned at least 3,000 passengers since May of last year, and that doesn’t include two of the largest, American and Southwest, which decline to provide figures.

Airlines have stripped some customers of frequent-flyer benefits, and in rare cases pilots have made unplanned landings to remove unruly passengers. Pilots and flight attendants now routinely make pre-flight announcements to remind passengers about federal regulations against interfering with crews.

“All of that is helpful, and if we didn’t have that I can only imagine how much worse it would be,” said Sara Nelson, president of the Association of Flight Attendants, “but this is clearly not taking care of the whole problem. We have to do a lot more. I have never, ever seen an environment like this.”

Mike Oemichen has been a flight attendant for seven years and he, too, says he has never seen so much bad behavior on board. He recounted a recent incident in which he and other flight attendants had just completed the safety briefing for passengers and were preparing for takeoff when a fight broke out between two men and a woman accompanying one of them.

“After 20 or 30 seconds we were able to get the two male passengers away from each other, and we tried to calm everyone down,” Oemichen said. “Then we went back to the gate and had the passengers removed.”

Oemichen suffered a concussion when he hit his head against an overhead bin during the melee.

“We never figured out what they were fighting over,” said Oemichen, who spoke on condition that his airline not be named. He also handles grievances for union members at his airline.

The fear among flight attendants is that things will get worse this summer, as travel continues to increase and planes get more crowded. The airline industry passed a milestone earlier this month when the Transportation Security Administration announced that more than 2 million people streamed through U.S. airport security checkpoints for the first time since early March 2020.

Airline bookings have been picking up since around February, as more Americans were vaccinated against COVID-19. Falling infection rates could, however, make it much harder for flight attendants to enforce the federal mask-wearing rule, which isn’t due to expire until mid-September.

Some security experts think lifting the mask requirement will remove a key source of tension — one with political overtones in a politically divided nation. But it could also raise the anxiety of people who worry about sharing space with strangers while we’re still in a pandemic.

“People on both sides of the issue are acting badly,” Nelson said.

Airline unions have asked for a variety of measures including more air marshals, limits on alcohol sales on planes and in airports, and more sharing of information among airlines about disruptive passengers. They are also floating the idea of a new government-maintained list of banned passengers — but one that would be less restrictive than the no-fly list for suspected terrorists.

It’s not clear why there is so much air rage. Airline employees and outside experts offer explanations including cramped flights, political polarization over wearing face masks, and the way pandemic lockdowns affect people’s mental health.

“We are all more traumatized than we realize, and that puts people on edge,” said Raymond Tafrate, a psychologist and criminology professor at Central Connecticut State University who has studied anger. “The pandemic isolated people and caused all sorts of stress and problems in their lives. People are in worse shape than they were before.”

“It is a virus, and people are highly sensitized to the physical proximity of others around them,” Bor said. He added that some people take measures like mask-wearing more seriously than others, creating conflict. “How you negotiate that in such an environment is the issue.”

There have been periods in the past where air rage seemed an intractable problem, but later subsided. Long-time flight attendants say there was an uptick in unruly passengers in the 1990s. That led Congress to make it a crime to interfere with a flight crew, and incidents gradually declined, these cabin crew members say.

Arjun Garg, who served as FAA chief counsel until earlier this year, said serious cases of misbehaving passengers were rarely discussed at the agency’s top levels until the pandemic hit.

“It would happen every once in a while, but it wasn’t a major feature of anybody’s thinking at FAA,” Garg said of the pre-pandemic incidents. “Airlines would often resolve them as a ‘customer-service issue,’ and everyone would go on their way.”

Tafrate’s advice to travelers: “Accept that flights don’t always go the way you want, and accept there are going to be some rules that you don’t like.”