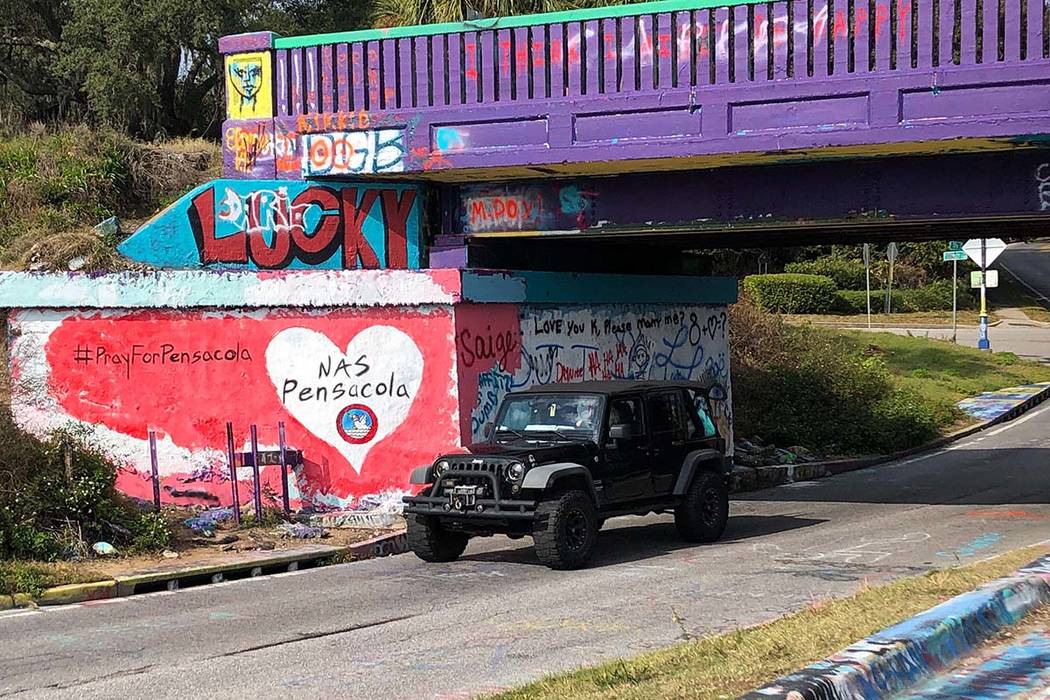 A vehicle drives by a tribute to victims of the Naval Air Station Pensacola that was freshly painted on what’s known as Graffiti Bridge in downtown Pensacola, Fla., on Saturday, Dec. 7, 2019. A US official says the Saudi student who fatally shot three people at the Florida naval base had hosted a dinner party earlier in the week to watch videos of mass shootings. The official spoke on condition of anonymity after being briefed by federal investigators. The official says a second Saudi student was recording outside the building at the Naval Air Station Pensacola on Friday while the shooting was happening inside. The official also says 10 Saudi students are being held at the base and that several others are unaccounted for.   (AP Photo/Brendan Farrington) 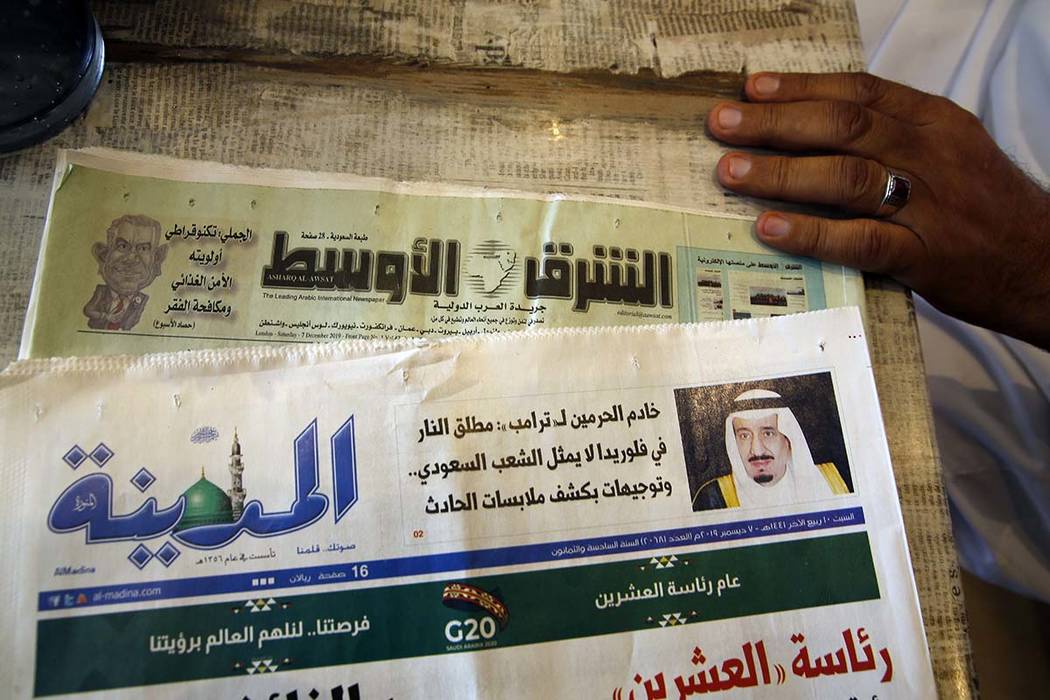 Saudi daily Al-Madina newspaper fronted by a picture of Saudi King Salman is displayed at a coffee shop in Jiddah, Saudi Arabia, Saturday, Dec. 7, 2019. U.S. law enforcement officials were digging into the background of the suspected Florida naval station shooter Friday, to determine the Saudi Air Force officer's motive and whether it was connected to terrorism. Arabic reads "King Salman to Donald J. Trump: Florida shooter does not represent the Saudi people." (AP Photo/Amr Nabil) 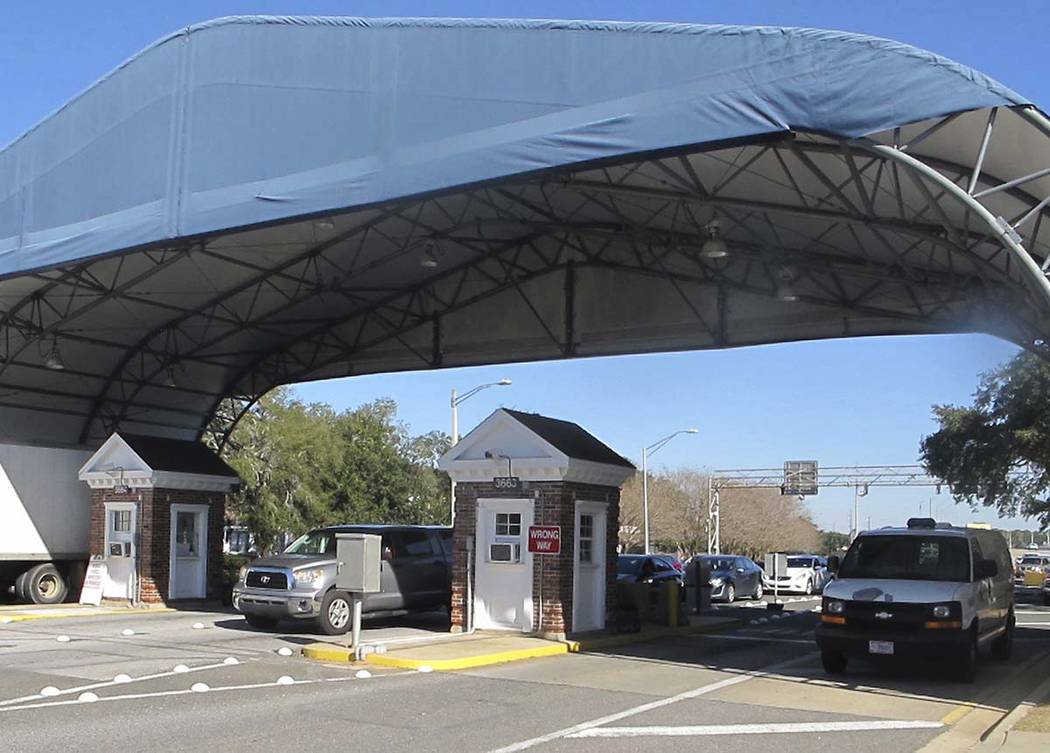 In this Jan. 29, 2016 file photo shows the entrance to the Naval Air Base Station in Pensacola, Fla. The US Navy is confirming that an active shooter and one other person are dead after gunfire at the Naval Air Station in Pensacola. Area hospital representatives tell The Associated Press that at least 11 people were hospitalized. The base remains locked down amid a huge law enforcement response. (AP Photo/Melissa Nelson, File) 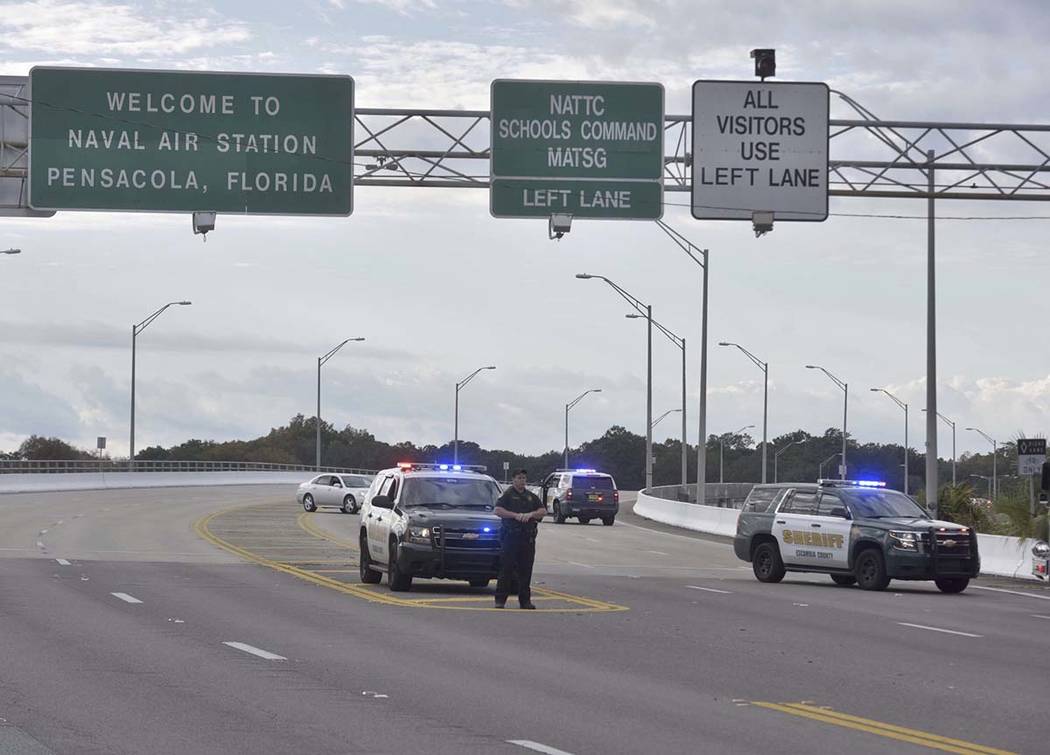 Police vehicles block the entrance to the Pensacola Air Base, Friday, Dec. 6, 2019 in Pensacola, Fla. The US Navy is confirming that a shooter is dead and several injured after gunfire at the Naval Air Station in Pensacola. (Tony Giberson/ Pensacola News Journal via AP) 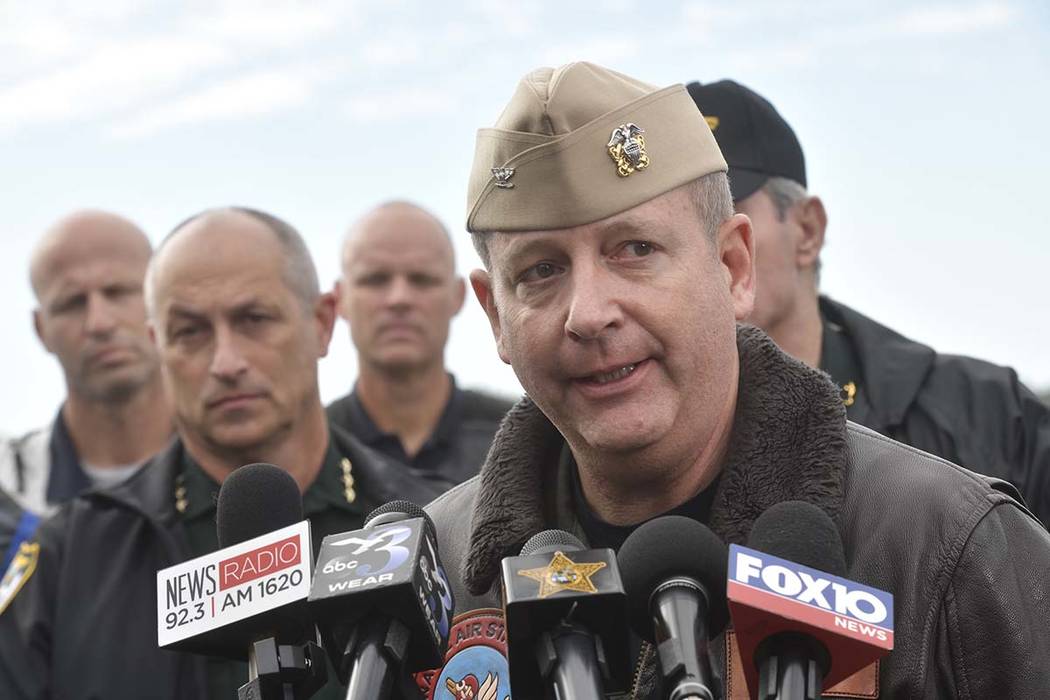 PENSACOLA, Fla. — The Saudi student who fatally shot three people at a U.S. naval base in Florida hosted a dinner party earlier in the week where he and three others watched videos of mass shootings, a U.S. official told The Associated Press on Saturday.

Officials investigating the deadly attack were working Saturday to determine whether it was motivated by terrorism, while President Donald Trump indicated he would review policies governing foreign military training in the United States.

Family members on Saturday identified one of the victims as a 23-year-old recent graduate of the U.S. Naval Academy who alerted first responders to where the shooter was even after he had been shot several times.

“Joshua Kaleb Watson saved countless lives today with his own,” Adam Watson wrote on Facebook. “He died a hero and we are beyond proud but there is a hole in our hearts that can never be filled.”

The shooter opened fire inside a classroom at Naval Air Station Pensacola on Friday, killing three people and wounding two sheriff’s deputies, one in the arm and one in the knee, before one of the deputies killed him. Eight others were also hurt. Both deputies were expected to survive.

The official who spoke Saturday said one of the three students who attended the dinner party hosted by the attacker recorded video outside the classroom building while the shooting was taking place. Two other Saudi students watched from a car, the official said.

Ten Saudi students were being held on the base Saturday while several others were unaccounted for, said the official, who spoke on condition of anonymity after being briefed by federal authorities.

A U.S. official on Friday identified the shooter as Mohammed Saeed Alshamrani. The official wasn’t authorized to discuss the matter publicly and spoke to the AP on condition of anonymity. The official also said the FBI was examining social media posts and investigating whether he acted alone or was connected to any broader group.

Two U.S. officials identified the student as a second lieutenant in the Saudi Air Force, and said Friday that authorities were investigating whether the attack was terrorism-related. They spoke on condition of anonymity to disclose information that had not yet been made public.

President Trump declined to say whether the shooting was terrorism-related. The president tweeted his condolences to the families of the victims on Friday and noted that Saudi King Salman had reassured him in a telephone call that the shooter “in no way shape or form represents the feelings of the Saudi people.”

But in comments echoing those made earlier by Defense Secretary Mark Esper, Trump said Saturday that he would review policies governing foreign military training in the U.S.

The U.S. has long had a robust training program for Saudis, providing assistance in the U.S. and in the kingdom. Currently, more than 850 Saudis are in the United States for various training activities. They are among more than 5,000 foreign students from 153 countries in the U.S. going through military training.

“This has been done for many decades,” Trump said. “I guess we’re going to have to look into the whole procedure. We’ll start that immediately.”

The shooting has shined a spotlight on the sometimes rocky relationship between the United States and Saudi Arabia.

The kingdom is still trying to recover from the killing last year of Washington Post columnist Jamal Khashoggi at the Saudi Consulate in Istanbul. Saudi intelligence officials and a forensic doctor killed and dismembered Khashoggi on Oct. 2, 2018, just as his fiancée waited outside the diplomatic mission.

Naval Air Station Pensacola is one of the Navy’s most historic and storied bases. It sprawls along the waterfront southwest of the city’s downtown and dominates the economy of the surrounding area.

Part of the base resembles a college campus, with buildings where, in addition to foreign students, 60,000 members of the U.S. Navy, Marines, Air Force and Coast Guard train each year in multiple fields of aviation.

Kinsella said the base would remain closed until further notice.

Residents of Pensacola mourned the attacks and offered their condolences to the affected members of the community.

Joshua Watson was being praised as a hero by his family.

Adam Watson said his little brother was able to make it outside the classroom building to tell authorities where the shooter was after being shot “multiple” times. “Those details were invaluable,” he wrote on his Facebook page.

Watson’s father, Benjamin Watson, was quoted by the Pensacola News Journal as saying that his son was a recent graduate of the U.S. Naval Academy who dreamed of becoming a Navy pilot. He said he had reported to Pensacola two weeks ago to begin flight training. “He died serving his country,” Benjamin Watson said.

The shooting is the second at a U.S. naval base in one week. A sailor whose submarine was docked at Pearl Harbor, Hawaii, opened fire on three civilian employees Wednesday, killing two before taking his own life. 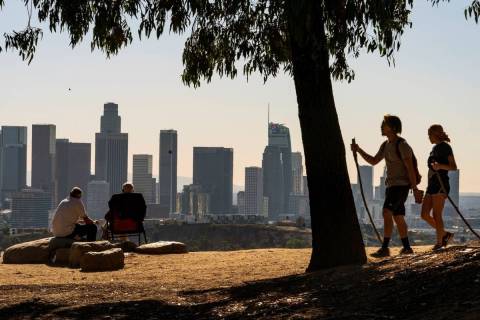