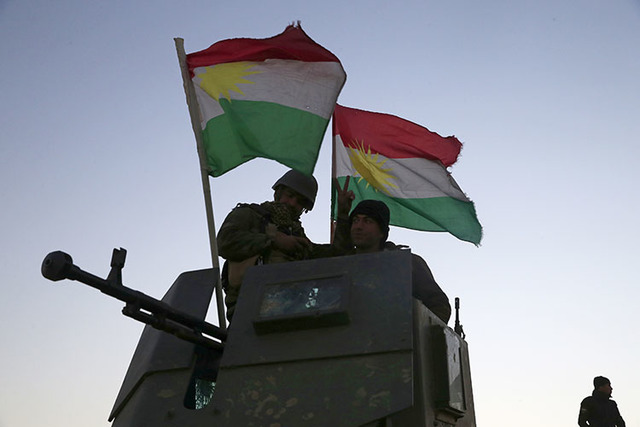 Kurdish Peshmerga fighters stand on top of a military vehicle as they advance toward villages surrounding Mosul, Iraq on Monday, Oct. 17, 2016. (Bram Janssen/AP) 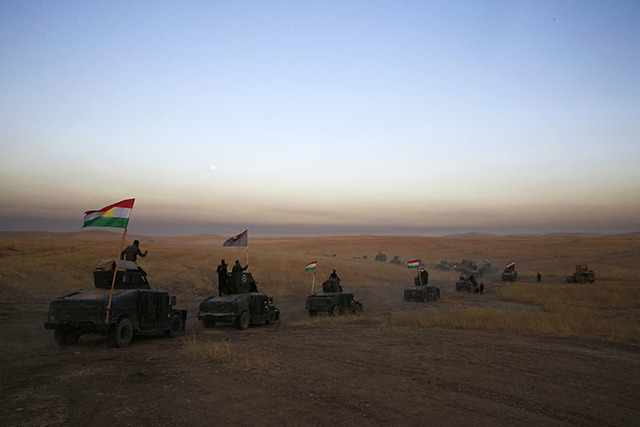 A Peshmerga convoy drives toward a frontline east of Mosul, Iraq, Monday, Oct. 17, 2016. The Iraqi military and the country's Kurdish forces say they launched operations to the south and east of militant-held Mosul early Monday morning. (Bram Janssen/AP)

KHAZIR, IRAQ — Iraq announced the beginning of its offensive for the northern city of Mosul on Monday, embarking on the country’s biggest fight against Islamic State militants so far.

In a televised address, Prime Minister Haider al-Abadi pledged to raise the Iraqi flag over the city once more, calling on residents to cooperate with the advancing forces.

The U.S.-backed operation aims to push the militant group out of its de facto capital in Iraq. More than a million civilians are believed to be trapped in the city.

Late Sunday, dozens of ambulances were lined up at checkpoints on the edges of Iraq’s northern region of Kurdistan, ready to ferry out casualties. Thousands of Iraqi troops have moved into position for the battle in recent weeks, and new military staging areas have sprung up along front lines.

The Mosul offensive marks a showdown in the Islamic State’s last major stronghold in Iraq and the city that has come to symbolize the group’s rise here. It was in Mosul’s Great Mosque that Islamic State leader Abu Bakr al-Baghdadi announced his self-proclaimed caliphate more than two years ago.

But since then, the group’s grip has slowly crumbled. Tikrit, Ramadi and Fallujah have been clawed back by Iraqi forces, albeit with a heavy reliance on U.S.-led airstrikes.

It’s only a matter of time before Mosul is recaptured, too, Abadi said.

“We will soon meet in Mosul to celebrate in liberation and your salvation,” he said, addressing the people of the city. “We will rebuild what has been destroyed by this criminal gang.”

The battle for Mosul draws together tens of thousands of Iraqi troops from an array of the country’s forces: Kurdish peshmerga soldiers, Sunni tribal fighters, army, police, Shiite militias and elite counterterrorism units. From the sky and on the ground comes close support from the U.S.-led coalition. More than 80,000 troops are involved, including engineers and logistical support, said Maj. Salam Jassim, a commander with Iraq’s elite special forces.

Despite sometimes competing agendas, the various armed forces have united, at least for now, to take back the Islamic State’s most prized remaining territory in the country.

At a staging area in a hamlet near Khazir, east of Mosul, Jassim and his men were waiting for the order for “zero hour.” In houses emptied by fighting, soldiers entertained themselves with cards and dominoes. Battle plans were drawn out in black marker on walls and plastic tables.

“We’ll take it,” Jassim said, sipping on a can of Tiger Energy Drink – a favorite of Iraqi forces. “There’s no doubt.”

Troops have massed to the north, south and east of the city in recent weeks.

Trucks packed with Iraqi soldiers and military vehicles have clogged the roads as forces have moved into place. Tanks, armored vehicles and weaponry have been hauled nearly 250 miles from the capital, Baghdad.

For the first 48 hours, the offensive on the eastern front will be led by Kurdish forces known as peshmerga, Iraqi military officers said.

“Then they will stop,” said Brig. Gen. Haider Obaidi, another commander with Iraq’s special forces. “We’ll start after them and move after them to support them.”

Federal police and Iraqi army units will move up the main highway from Baghdad, while Shiite militia forces are expected to focus on Tal Afar to the west and the town of Hawijah to the southeast. Kurdish peshmerga forces, Sunni fighters and the Iraqi army will also attack from the north.

Opinions are split on just how long and grinding the battle will be. Abadi has pledged to have the city back under Iraqi government control by the end of the year.

But Jassim is not sure that’s possible, with booby traps and explosive devices expected to slow the way.

Civilians, too, will complicate the battle. Between 1.2 million and 1.8 million are still inside the city, he said.

To avoid a humanitarian crisis, the Iraqi government has asked civilians to stay in their homes, complicating air support and operations to clear neighborhoods of militants.

“The operation will take much longer because of this,” Obaidi said. “For their safety, but it also means each neighborhood needs to be surrounded and searched as we clear it.”

Still, the U.S.-led coalition will give closer support than in any other operation, he said, and Apache helicopters will probably be used. On Sunday night, preparatory airstrikes rattled windows in the special forces base near Khazir.

The coalition has requested that the airspace be cleared of Iraqi jets, whose air support will be limited to the areas where Shiite militias are on the ground, Obaidi said.

“All the sky will be for the coalition,” he added. The western side of the city will be left largely open, which may make for a less protracted fight inside than if it was besieged. “We’ll try to give them an escape to run to Syria,” he said of the militants.

Brig. Gen. Yahya Rasoul, a spokesman for the Iraqi military, said that even if the western side is left open, it doesn’t mean a safe escape for the Islamic State. “If we do that, then this area will become a killing zone as we target them with our aircraft,” he said.