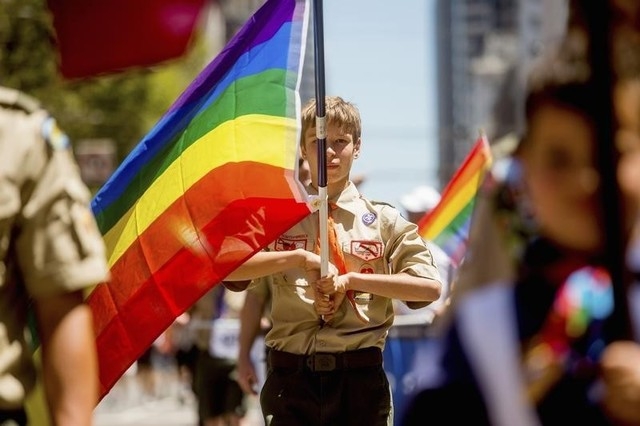 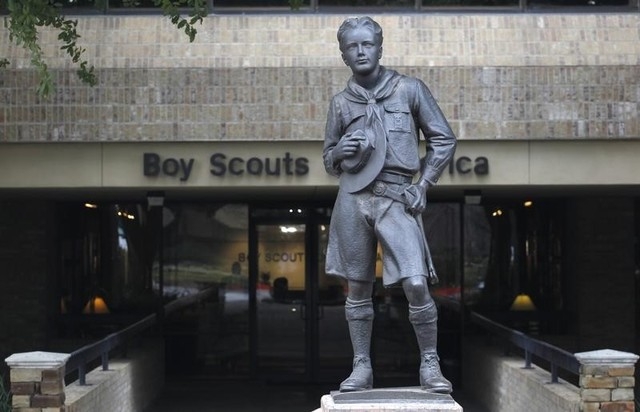 The statue of a scout stands in the entrance to Boy Scouts of America headquarters in Irving, Texas, Feb. 5, 2013. (Reuters/Tim Sharp)

DALLAS — Boy Scouts of America President Robert Gates said on Thursday the group’s ban on adult gay leaders needs to end, taking a step toward dismantling a policy that has caused deep rifts in the 105-year-old organization.

Gates said at the group’s national meeting in Atlanta he does not plan to revoke the charters of Boy Scout councils that allow gay leaders, according to a text of the speech, which could significantly weaken enforcement of the ban.

“We must deal with the world as it is, not as we might wish it to be. The status quo in our movement’s membership

standards cannot be sustained,” said Gates, who as U.S. secretary of defense helped end the “Don’t Ask, Don’t Tell” policy that barred openly gay individuals from serving in the military.

He said he was not asking the Boy Scouts’ national board to make any policy change at the current meeting.

“Dozens of states – from New York to Utah – are passing laws that protect employment rights on the basis of sexual orientation,” he said. “Thus, between internal challenges and potential legal conflicts, the Boy Scouts of America finds itself in an unsustainable position.”

“We are 180 degrees from where we were a year ago,” said Zach Wahls, executive director of Scouts for Equality. “This is a very, very positive development.”

The Irving, Texas-based organization lifted its ban on gay youth in 2013 but continues to prohibit the participation of openly gay adults. The selection last year of Gates as president of the Boy Scouts was seen as an opportunity to revisit the policy.

Gates said he personally would have supported going further toward lifting the Scouts’ ban on gays but would not reopen debate during his two-year term.

The policy received its first major challenge in April when the first openly gay adult was hired as a summer camp leader by the Greater New York Council of Boy Scouts.

In Ohio, an assistant scoutmaster was expelled in March for being openly gay, according to local media reports.

Some major sponsors have pulled funding from the group to protest policies they consider discriminatory, including Lockheed Martin Corp and Intel Corp. Meanwhile, some social conservatives have enrolled their children in alternative scouting groups that ban gay members.

Membership in the Boy Scouts of America is in the grips of a decade-long decline, but it took a steeper tumble during 2014, the first year openly gay youth were allowed to belong.

“The one thing we cannot do is put our heads in the sand and pretend this challenge will go away or abate. Quite the opposite is happening,” Gates also said.