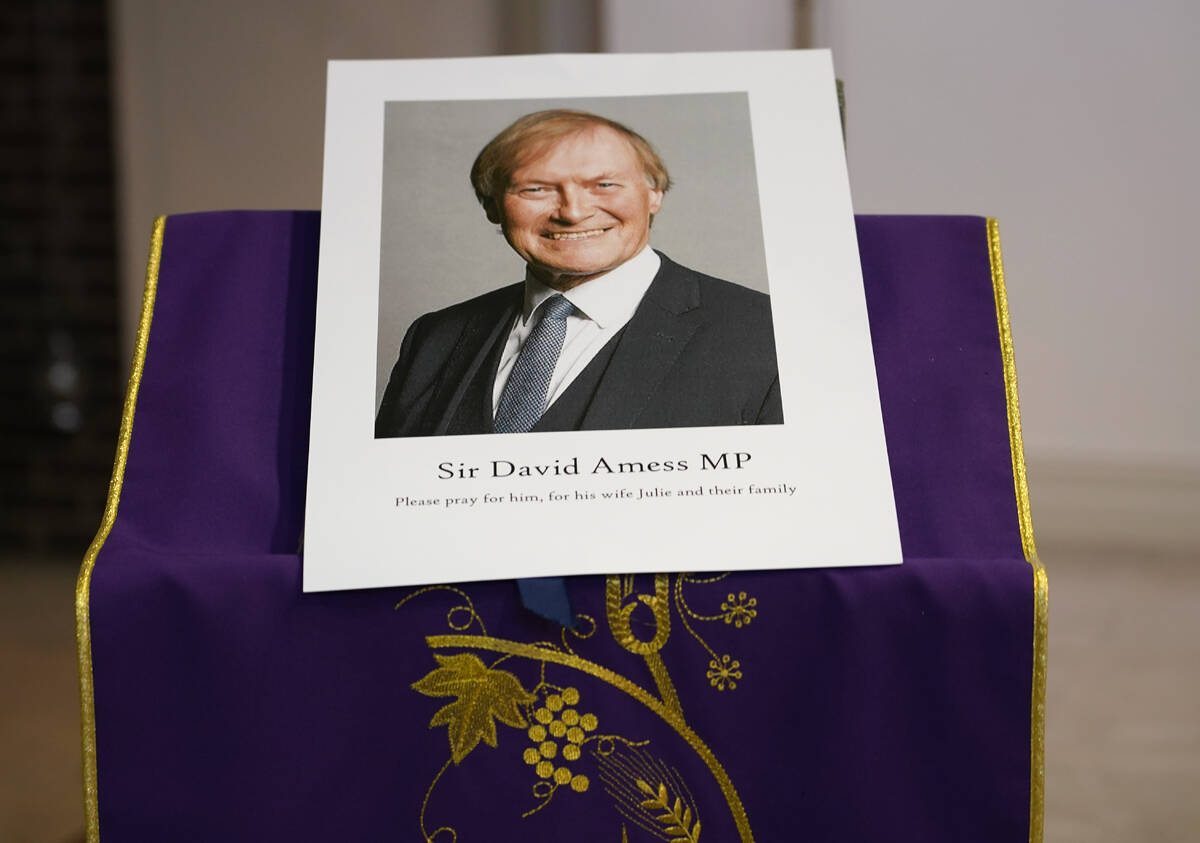 An image of murdered British Conservative lawmaker David Amess is displayed near the altar in St Peters Catholic Church before a vigil in Leigh-on-Sea, Essex, England, Friday, Oct. 15, 2021. Amess died after being stabbed earlier Friday during a meeting with constituents at another nearby church in eastern England. Police gave no immediate details on the motive for the killing of 69-year-old Conservative lawmaker Amess and did not identify the suspect, who was being held on suspicion of murder. (AP Photo/Alberto Pezzali) 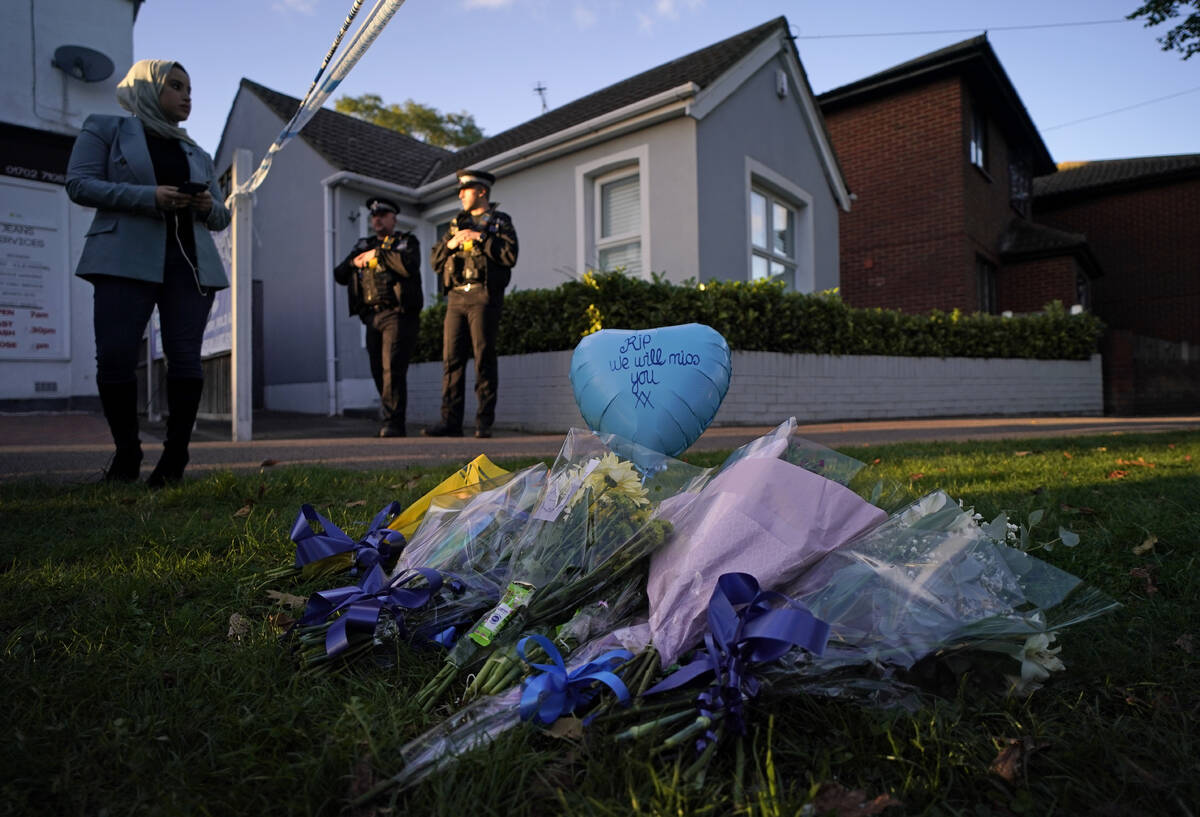 Floral tributes can be seen as police officers block one of the roads leading to the Belfairs Methodist Church in Eastwood Road North, where British Conservative lawmaker David Amess has died after being stabbed at a constituency surgery, in Leigh-on-Sea, Essex, England, Friday, Oct. 15, 2021. Police gave no immediate details on the motive for the killing of 69-year-old Conservative lawmaker Amess and did not identify the suspect, who was being held on suspicion of murder. (AP Photo/Alberto Pezzali) 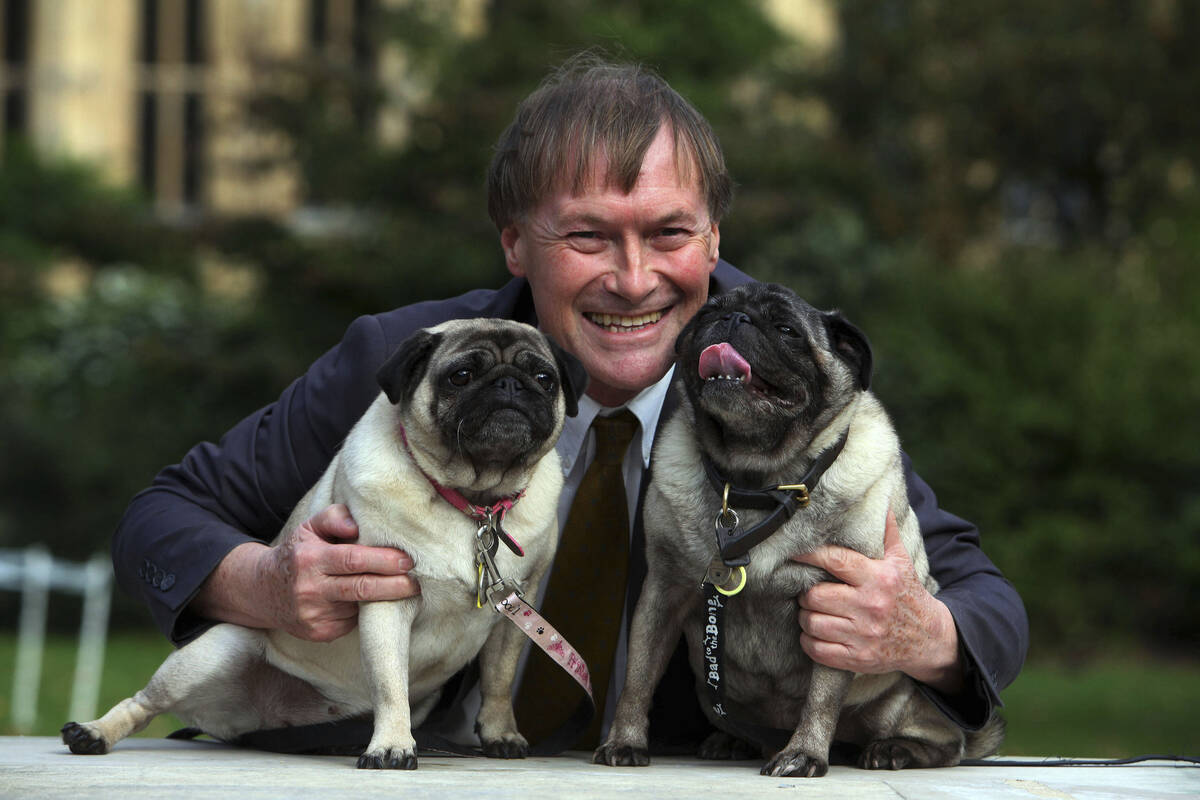 Conservative MP David Amess with his pugs, Lily and Boat at the Westminster Dog of the Year competition at Victoria Tower Gardens in London on Oct. 10, 2013. British police say a man has been arrested after a reported stabbing in eastern England. News outlets say the victim is Conservative lawmaker David Amess. The Essex Police force said officers were called to reports of a stabbing in Leigh-on-Sea just after noon Friday. It said “a man was arrested shortly after & we’re not looking for anyone else.” (Geoff Caddick/PA via AP) 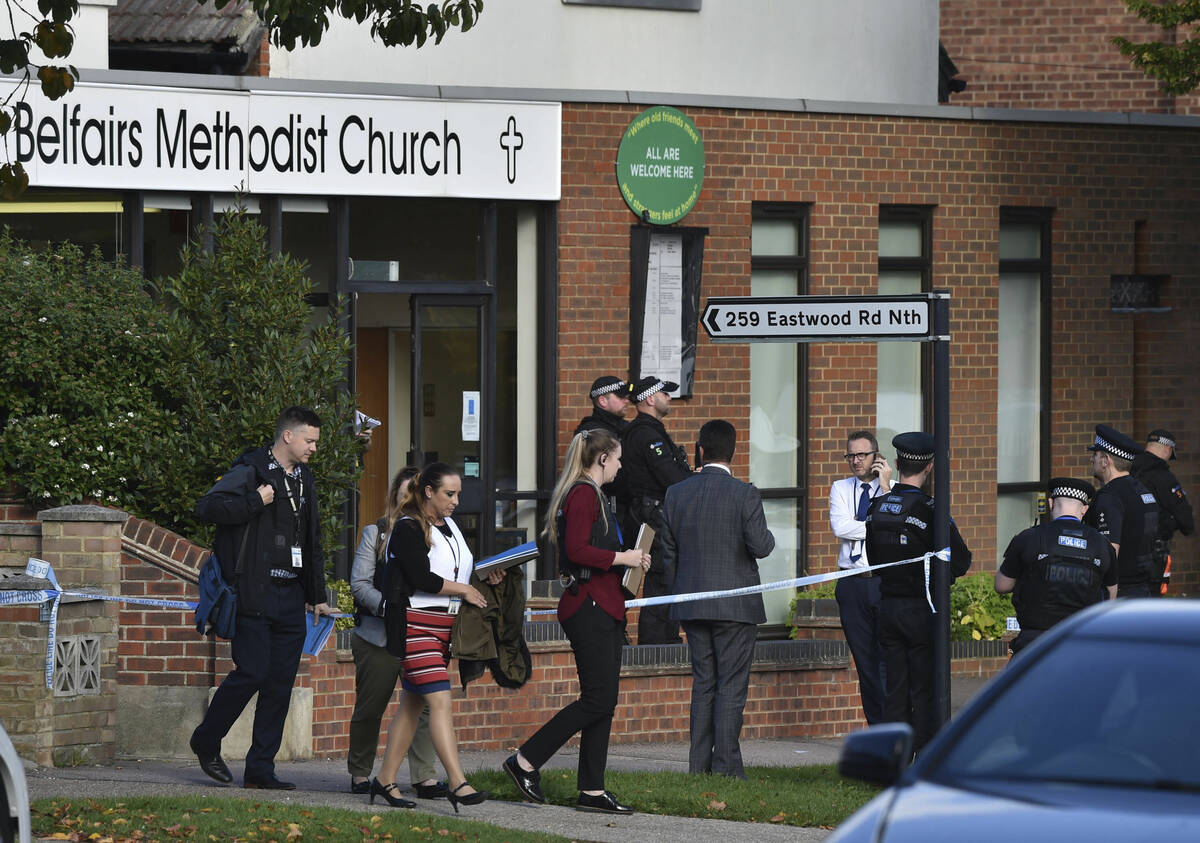 People leave the Belfairs Methodist Church in Eastwood Road North, where Conservative MP Sir David Amess has reportedly been stabbed several times at a constituency surgery, in Leigh-on-Sea, Essex, England, Friday, Oct. 15, 2021. British police say a man has been arrested after a reported stabbing in eastern England. News outlets say the victim is Conservative lawmaker David Amess. The Essex Police force said officers were called to reports of a stabbing in Leigh-on-Sea just after noon Friday. It said “a man was arrested shortly after & we’re not looking for anyone else.” (Nick Ansell/PA via AP) 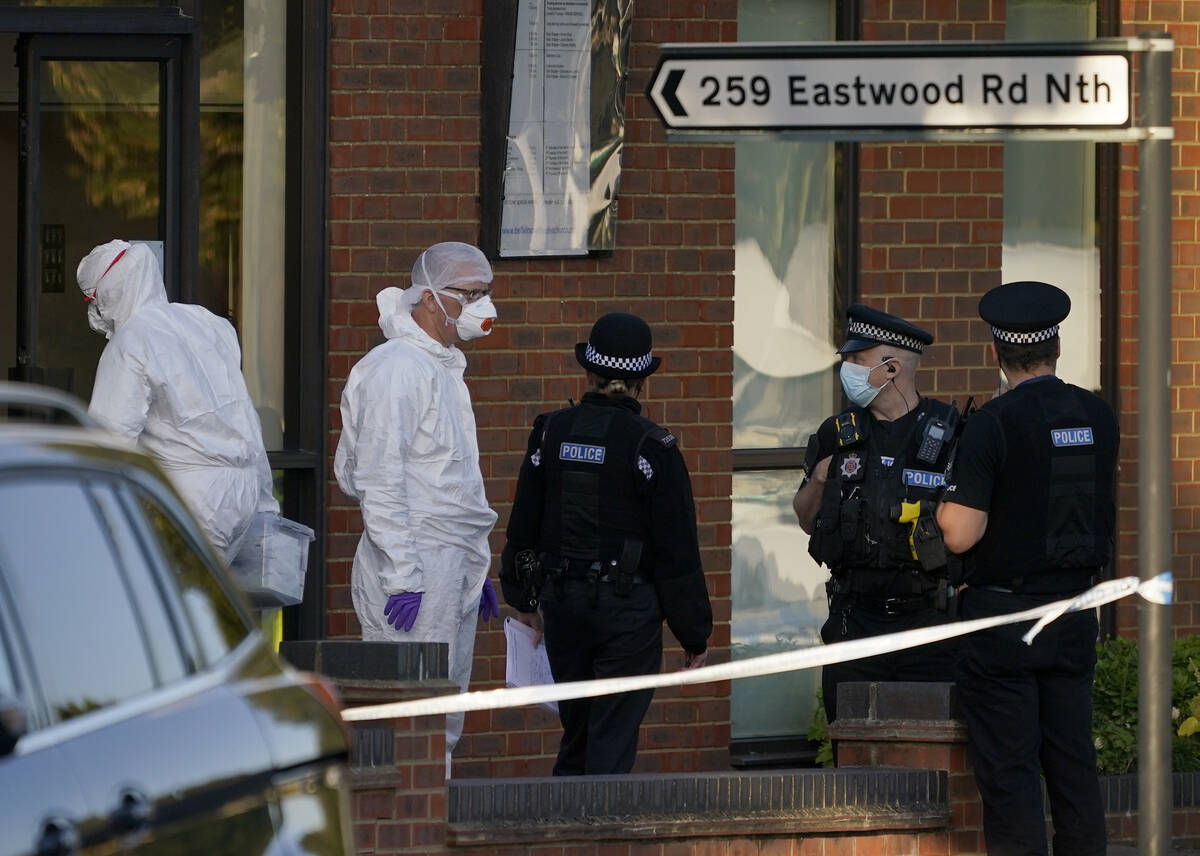 Police officers talk at the scene outside the Belfairs Methodist Church in Eastwood Road North, where British Conservative lawmaker David Amess has died after being stabbed at a constituency surgery, in Leigh-on-Sea, Essex, England, Friday, Oct. 15, 2021. Police gave no immediate details on the motive for the killing of 69-year-old Conservative lawmaker Amess and did not identify the suspect, who was being held on suspicion of murder. (AP Photo/Alberto Pezzali)

LEIGH-ON-SEA, England — A long-serving member of Parliament was stabbed to death Friday during a meeting with constituents at a church in England, an attack that united Britain’s fractious politicians in shock and sorrow. A 25-year-old man was arrested at the scene.

Police said that counterterrorism officers were leading the investigation into the slaying of Conservative lawmaker David Amess but that they had not yet determined whether it was a terrorist attack. They did not identify the suspect, who was held on suspicion of murder.

The slaying came five years after another MP, Jo Cox, was murdered by a far-right extremist in her small-town constituency, and it renewed concern about the risks politicians run as they go about their work representing voters. British politicians generally are not given police protection when they meet with their constituents.

Prime Minister Boris Johnson said he and his Cabinet were “deeply shocked and heart-stricken.”

“David was a man who believed passionately in this country and in its future, and we’ve lost today a fine public servant and a much-loved friend and colleague,” Johnson said.

The prime minister would not say whether the attack meant politicians needed tighter security, saying, “We must really leave the police to get on with their investigation.”

Amess, 69, was attacked around midday at a Methodist church in the town of Leigh-on-Sea, about 40 miles (62 kilometers) east of London. Paramedics tried without success to save him. Police arrested the suspect and recovered a knife.

“We are not looking for anyone else in connection with the incident and do not believe there is an ongoing threat to the wider public,” police said.

Amess had been a member of Parliament for Southend West, which includes Leigh-on-Sea, since 1997, and had been a lawmaker since 1983, making him one of the longest-serving politicians in the House of Commons.

A social conservative on the right of his party, he was a well-liked figure with a reputation for working hard for his constituents and campaigning ceaselessly to have Southend declared a city.

He was knighted by Queen Elizabeth II in 2015 for his service, becoming Sir David.

Politicians from across the political spectrum expressed shock and sorrow at the death of Amess, who leaves a wife and five children. Flags at Parliament were lowered to half-staff.

“This is an incident that will send shockwaves across the parliamentary community and the whole country,” House of Commons Speaker Lindsay Hoyle said. “In the coming days we will need to discuss and examine MPs’ security and any measures to be taken, but for now, our thoughts and prayers are with David’s family, friends and colleagues.”

Violence against British politicians is rare, but concerns have grown in recent years about the increasingly bitter polarization of the country’s politics. Several people have been jailed in recent years for threatening British lawmakers.

In 2016, a week before the country’s divisive Brexit referendum, Cox, a Labour Party lawmaker, was fatally stabbed and shot in her northern England constituency. An extremist was convicted.

British lawmakers are protected by armed police when they are inside Parliament, and security there was tightened after an attacker inspired by the Islamic State group fatally stabbed a police officer at the gates in 2017.

But politicians have no such protection in their constituencies. Amess published the times and locations of his open meetings with constituents on his website.

Two other British lawmakers have been attacked over the past two decades during their “surgeries,” regular meetings where constituents can present concerns and complaints.

Labour legislator Stephen Timms was stabbed in the stomach in 2010 by a student radicalized by online sermons from an al-Qaida-linked preacher.

In 2000, Liberal Democrat Nigel Jones and his aide Andrew Pennington were attacked by a man wielding a sword during such a meeting. Pennington was killed and Jones wounded in the attack in Cheltenham, England.

Former Prime Minister Theresa May, a Conservative, tweeted that Amess’ killing was a “tragic day for our democracy,” and former Labour Prime Minister Tony Blair said he was “shocked and horrified.”

Conservative lawmaker Tracey Crouch tweeted: “Heartbroken. I could write reams on how Sir David was one of the kindest, most compassionate, well liked colleagues in Parliament. But I can’t. I feel sick. I am lost.”

Scottish First Minister Nicola Sturgeon of the Scottish National Party said on Twitter: “In a democracy, politicians must be accessible and open to scrutiny, but no one deserves to have their life taken while working for and representing their constituents.”

Archbishop of Canterbury Justin Welby, head of the Church of England, said the killing was a blow to “everyone who desires a peaceful and flourishing democracy.”

Kim Leadbeater, Jo Cox’s sister and now a member of Parliament herself, said it was “horrific” that Amess’ family was experiencing what hers had gone through.

“They will think about this every single day for the rest of their lives,” she said.

“I find myself now working as a politician and trying to do good things for people, and it’s really important you get good people in public life, but this is the risk we are all taking, and so many MPs will be scared by this.” 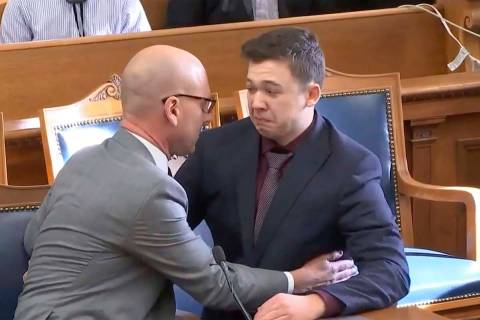