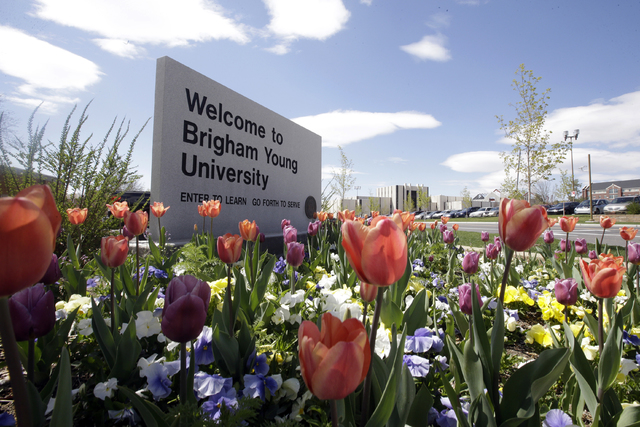 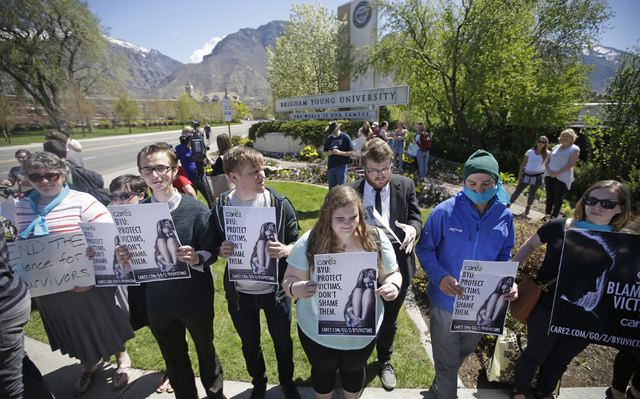 Protesters stand in solidarity with rape victims on the campus of Brigham Young University during a sexual assault awareness demonstration, in Provo, Utah. (Rick Bowmer/AP) 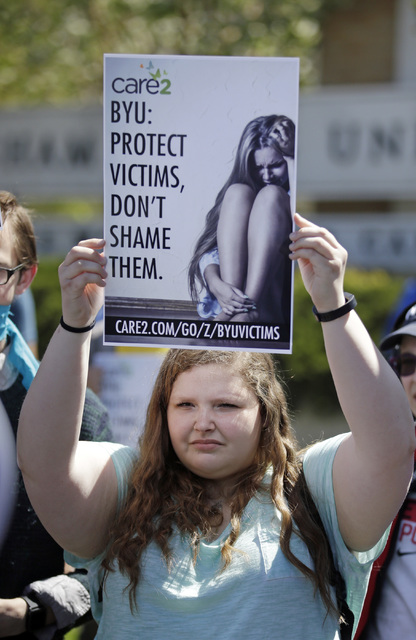 A protester stands in solidarity with rape victims on the campus of Brigham Young University during a sexual assault awareness demonstration in Provo, Utah. (Rick Bowmer/AP) 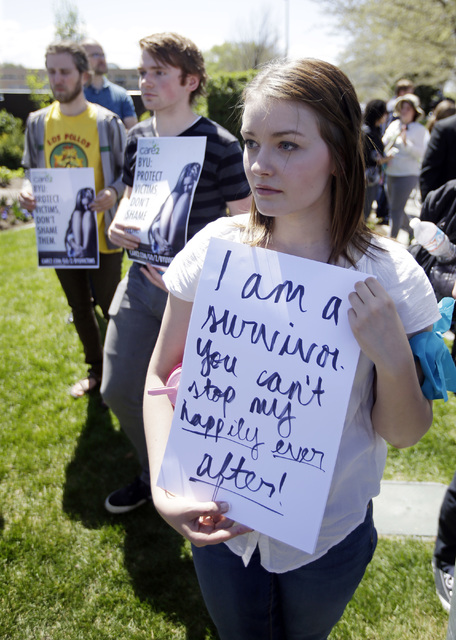 Katie Townsley stands in solidarity with rape victims on the campus of Brigham Young University during a sexual assault awareness demonstration in Provo, Utah. (Rick Bowmer/AP)

SALT LAKE CITY — Students at Brigham Young University who report sexual assault will no longer be investigated for possible violations of the strict honor code that bans drinking and premarital sex, the Mormon-owned school announced in a major reversal to a practice that drew widespread scrutiny.

The college on Wednesday accepted several recommendations made by a faculty council that reviewed how sexual assault cases are handled. The inquiry began in May after female students and alumni spoke out against the school opening honor-code investigations of students who report abuses.

Victims advocates said the practice discourages reporting of sexual violence, which is already underreported on campuses nationwide. The sweeping changes mark a victory for victims and advocates who have been seeking reform for years and serve as a university acknowledgement that its practices were deficient.

Two former students who went public with their experiences said they are mostly pleased with the upcoming changes at the school, where students must agree to a code forbidding sex before marriage and drug and alcohol use.

“By having an amnesty clause, we hopefully will let them know that they should not hold any self-blame, that we are here to provide help to them,” said Julie Valentine, a nursing professor who was on the council issuing the recommendations. “It also helps educate the whole community and the campus that we can’t have victim blaming, that we need to reach out and offer support.”

The school said in April that its honor-code investigations were “separate and independent” from federal Title IX inquiries. But its investigation found that the Title IX office on campus sometimes shared victims’ names and details of assaults with the honor-code office after the probes were complete, Valentine said.

Now, only information about a perpetrator who is found guilty of sexual assault can be shared, she said. In those cases, the victim’s name will be redacted so only the suspect faces honor-code discipline.

The school also will hire an advocate to provide confidential counseling for victims, Valentine said. Students previously were given a handout explaining their options but didn’t have somebody to talk to.

BYU would be dedicating more resources than many schools to addressing the problem if it completes the steps outlined in the investigative report, she said. But to truly make a difference, the school will need to involve the whole campus, she added.

The report comes as the federal government increases pressure to improve universities’ response to sexual violence. The Department of Education’s Office for Civil Rights has opened sex assault investigations into more than 200 schools, including BYU.

The school will replace a part-time Title IX coordinator with a full-time position. The federal office will be moved to a different area of campus far from the honor-code office.

Students were informed of the changes Wednesday in an email from BYU President Keven Worthen, Valentine said.

Madeline MacDonald, 20, came forward after she said she faced an honor-code investigation following her report of being sexually assaulted on a 2014 date. Though she was cleared, the two-month review made her feel like a target, not a victim.

“Within the bounds of how BYU already works, they’ve made a lot of amazing changes,” MacDonald said. “But we’re not done.”

The report on the investigation’s findings didn’t address the way Mormon bishops handle students telling them about sexual assault. MacDonald said that’s a key issue because bishops determine whether students are in good standing with the faith and therefore the university.

The report acknowledges students had “varied” experiences reporting assaults to Mormon leaders. It says the university doesn’t control that but will share the concerns with church officials.

Madi Barney, another former student who spoke out, said in a statement that she’s encouraged but hopes BYU ensures the changes happen and provides a way for students to lodge complaints.

Barney said she was sexually assaulted and then told that the honor-code office was investigating her after she reported it to police.

“Treating sexual assault like the heinous crime it is, and treating its victims with respect, is something that BYU should take very seriously — and it looks like they currently are,” Barney said.

Valentine said the decision for victims to come forward “put everything in a pressure cooker” and triggered an important discussion that led to the changes.

“Our hearts go out to all of these victims. I met with many of them, and it is really heartbreaking,” Valentine said.