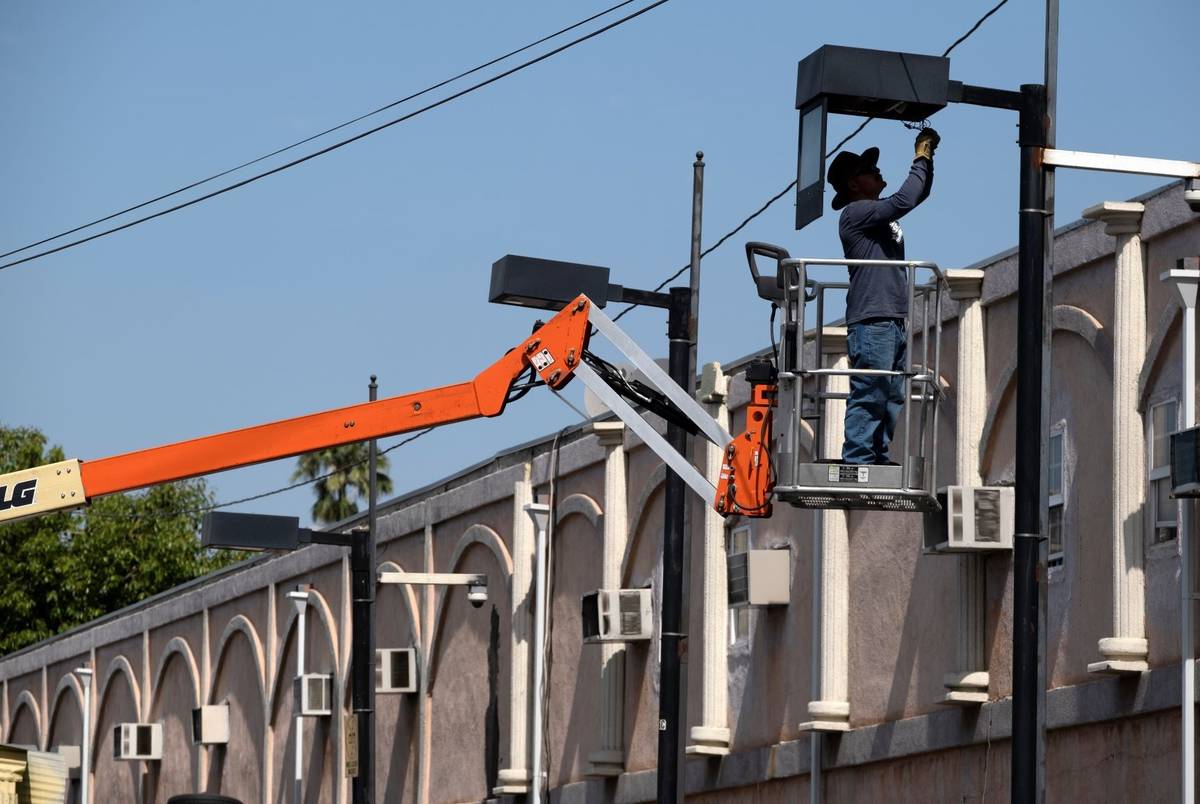 A worker fixes a street lamp in the Van Nuys section of Los Angeles on Thursday, June 17, 2021. (AP Photo/Richard Vogel)

LOS ANGELES — California residents were asked to voluntarily conserve power again on Friday as the heat wave that is baking the U.S. West strained the state’s energy grid and raised the possibility of rotating outages.

As temperatures spiked on Thursday, Gov. Gavin Newsom signed an emergency proclamation that suspended certain permitting requirements — allowing power plants to ramp up operations if necessary to meet the demand for electricity. The proclamation cited the “extreme heat peril” facing the state this week.

During those hours, people were urged to set their thermostats to 78 degrees or higher and to avoid using washers, dishwashers and other major appliances. An alert was also in place Thursday evening.

Pacific Gas & Electric said rotating power outages were possible for about 121,000 Northern California customers Thursday night but that step did not need to be taken because the power supply proved adequate.

During an intense Western heat wave last August, the state had two days of rotating outages that affected more than 200,000 people. They were the first such blackouts since 2001.

Power officials said the electrical grid has had upgrades since then, including transmission improvements and adding four times the amount of power stored in lithium-ion batteries. Boosting the 500 megawatts worth of battery storage currently to 2,000 megawatts by August could be crucial when solar power generation tails off after dark.

In all, about 3,500 megawatts of capacity will be added to the grid — enough to power some 2.6 million homes.

Interior areas of the state broiled Thursday. Triple-digit high temperatures were recorded in the Sacramento and San Joaquin valleys and the deserts. Death Valley reached 128 degrees and Palm Springs tied the all-time record of 123 degrees.

The temperatures were much cooler in the state’s coastal areas.

The heat wave was expected to continue into the weekend, with worst of the torrid conditions affecting California’s interior regions.

The heat was blamed on a dome of high pressure that has covered the U.S. West.

The heat wave came amid a drought that has dried up vegetation and increased fire danger. There have been a number of small wildfires around California this week but the state has avoided the fierce gusts that drove last year’s devastating blazes.